We were up at 6 and out the door 11 minutes later, so yeah, we might've been excited. It's always great when you can get out fishing, but it's even better when you can get out with someone you enjoy fishing with. My Bro-In-Law Courtney from Zip Dog Fishing is definitely a fisherman. Meaning he's someone that will go no matter what, in pursuit of whatever, and understands why we call it 'fishing' and not 'catching'. This makes him an enjoyable person to fish with, and the fact that he's family doesn't hurt either. 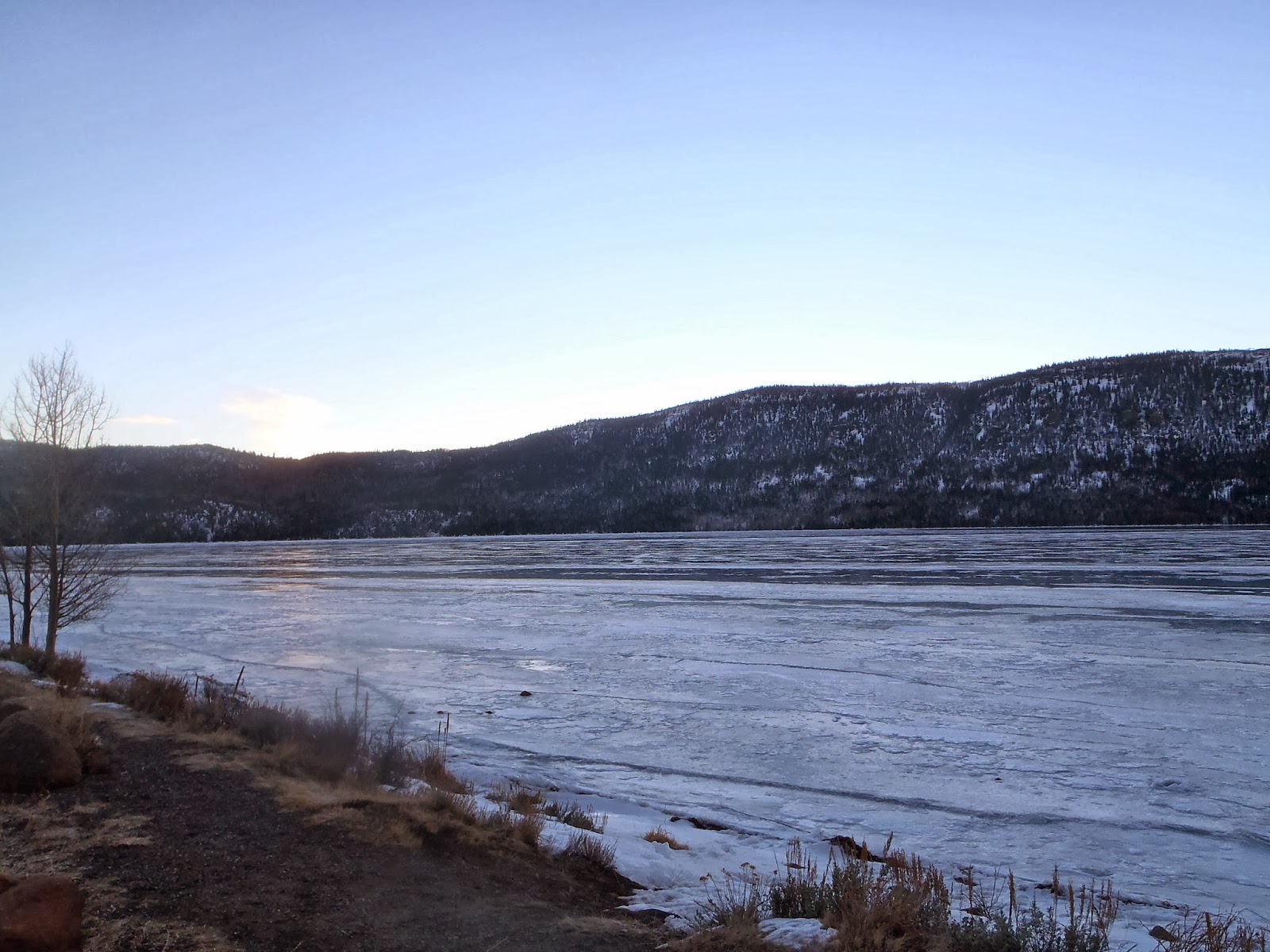 We arrived on the ice at Fish Lake in Southern Utah at about 8:00 in the morning, and after wondering about the sketchy looking ice, we were quickly set up. The first hole drilled showed about 10 feet of water to the top of the weed bed, and Court started trying his luck there. I drilled mine about 6 feet away, but a more towards the middle of the lake, and found about 15 feet of water. Quickly I was into fish while Court was struggling to buy strikes. Instead of changing rigs/bait/presentation he changed location to a similar depth and quickly started hammering the Bows. It was near constant action for a mixed bag of Perch, Bows and I even hooked into a couple of Splake.

With the good fishing I felt confident that I would find some success with my newly acquired tip-up but I've definitely got some learning to do before this thing really starts paying off for me. I tried drilled a couple of different holes, and tried a couple of different rigs, but no fish wanted to play. Oh well, you can't have everything (though this trip we came pretty dang close).


I don't consider myself a wussy on the ice. In fact, there's been many times when I've wanted to stay even if others are spooked out there. But when the sun was up and temps were rising the sketchy ice was looking scary. Even so, we were sticking it out till a huge pop, crack, and shift in the ice had us packing in about 2 seconds. There was no discussion, no possibility of staying, we were gone.

Once back at the truck we weighed our options. We thought about hitting the reportedly safer ice on the south end of the lake, but the crowds were really starting to look thick. So instead we decided to hit another lake not too far away in hopes of hooking into some nicer fish. Both of us understood that fishing probably wouldn't be as fast at the new lake, but we'd already caught enough fish to declare the trip a success anyway.

Now you've got to understand, I'm a fish nerd. When I'm not getting out I'm tying flies, building rods, and reading blogs/reports. So heading to this next lake wasn't a complete shot in the dark seeing as how I'd been reading how others were finding success here. When our first holes didn't produce in about 27 feet of water we knew that finding the right depth was more important than finding a magic jig or bait. A couple of holes later we found the 12-13 foot depth and the catching was on. Not fast fishing by any stretch of the imagination, but the size of trout definitely made it worth the wait. 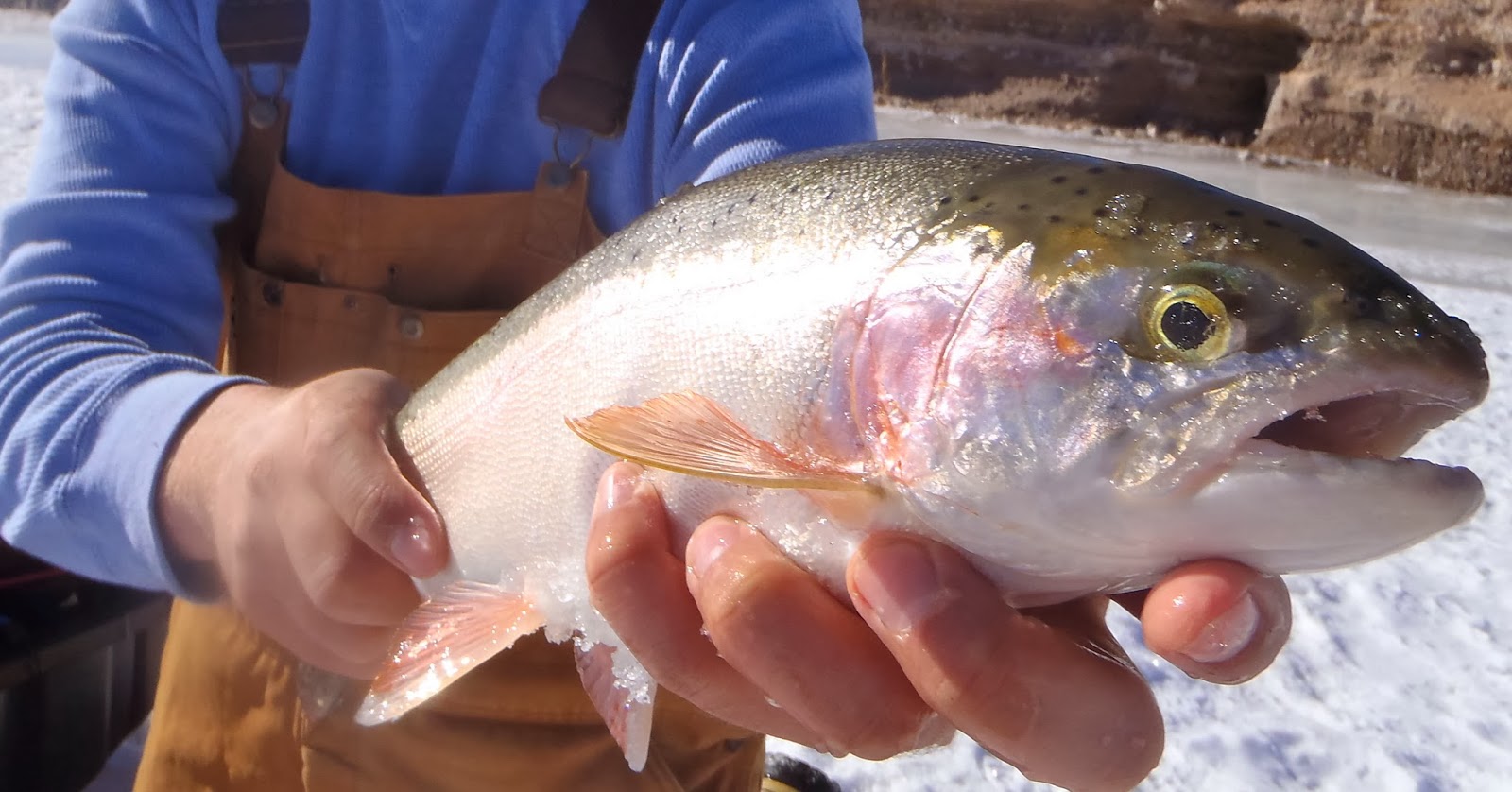 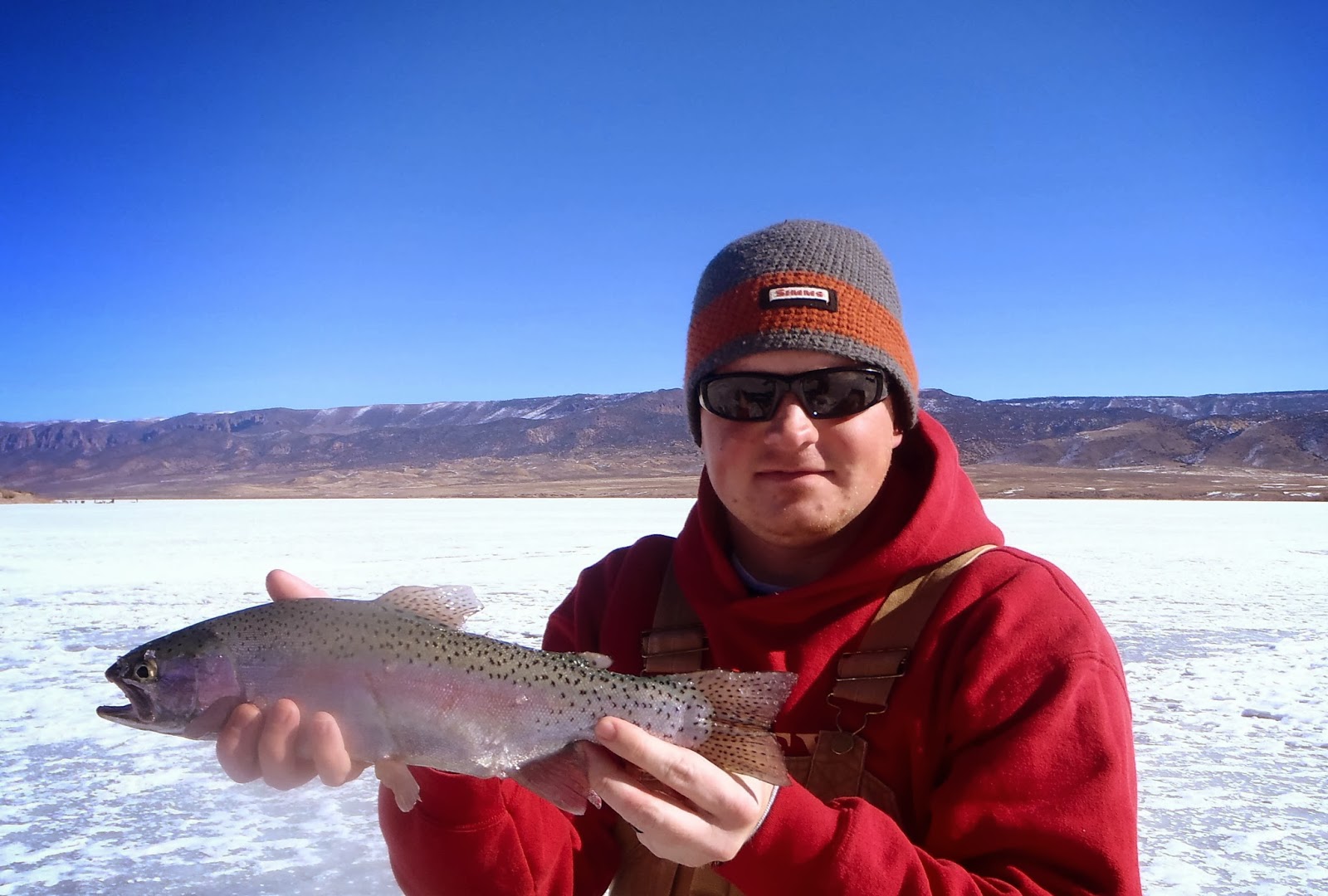 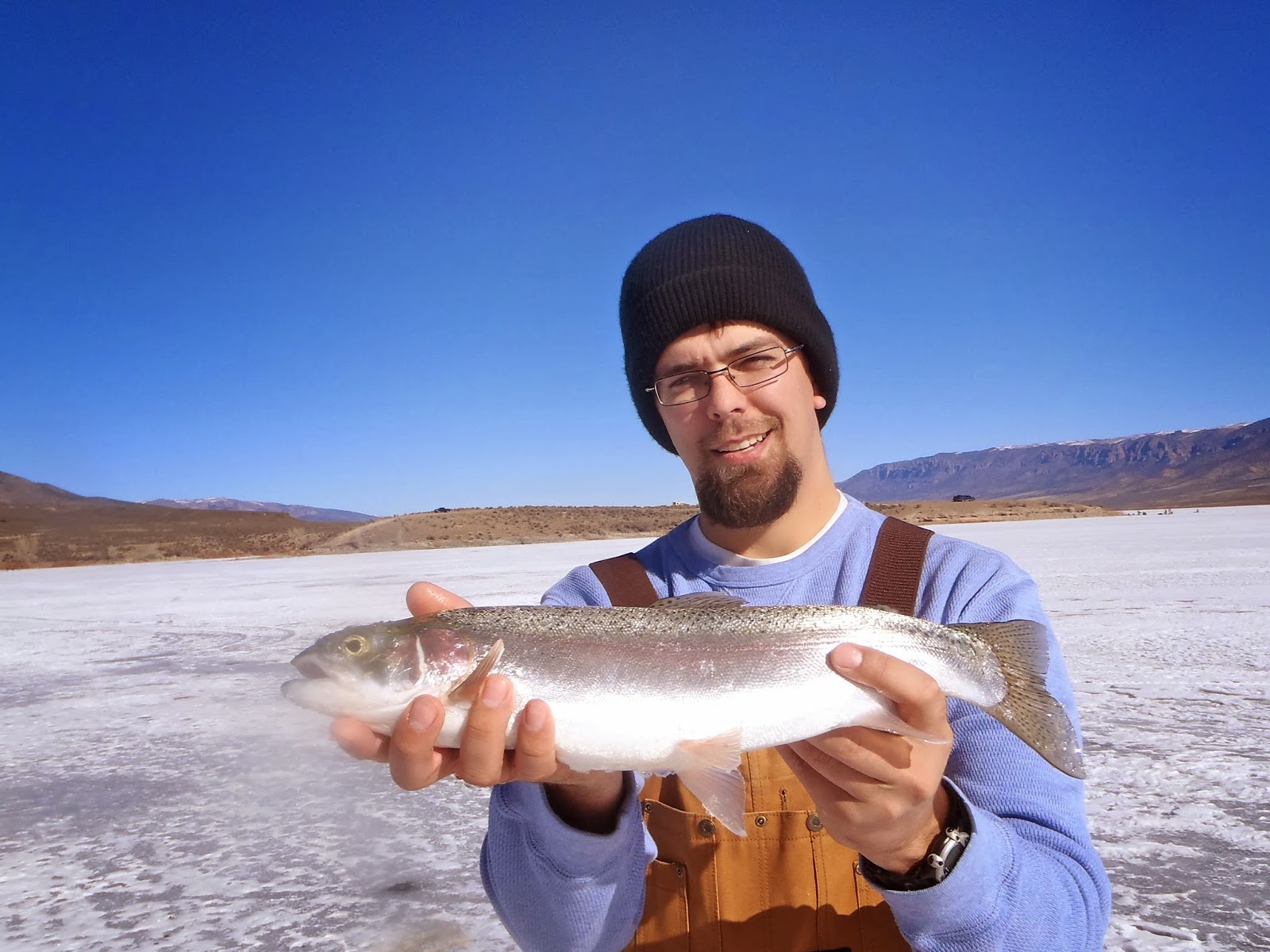 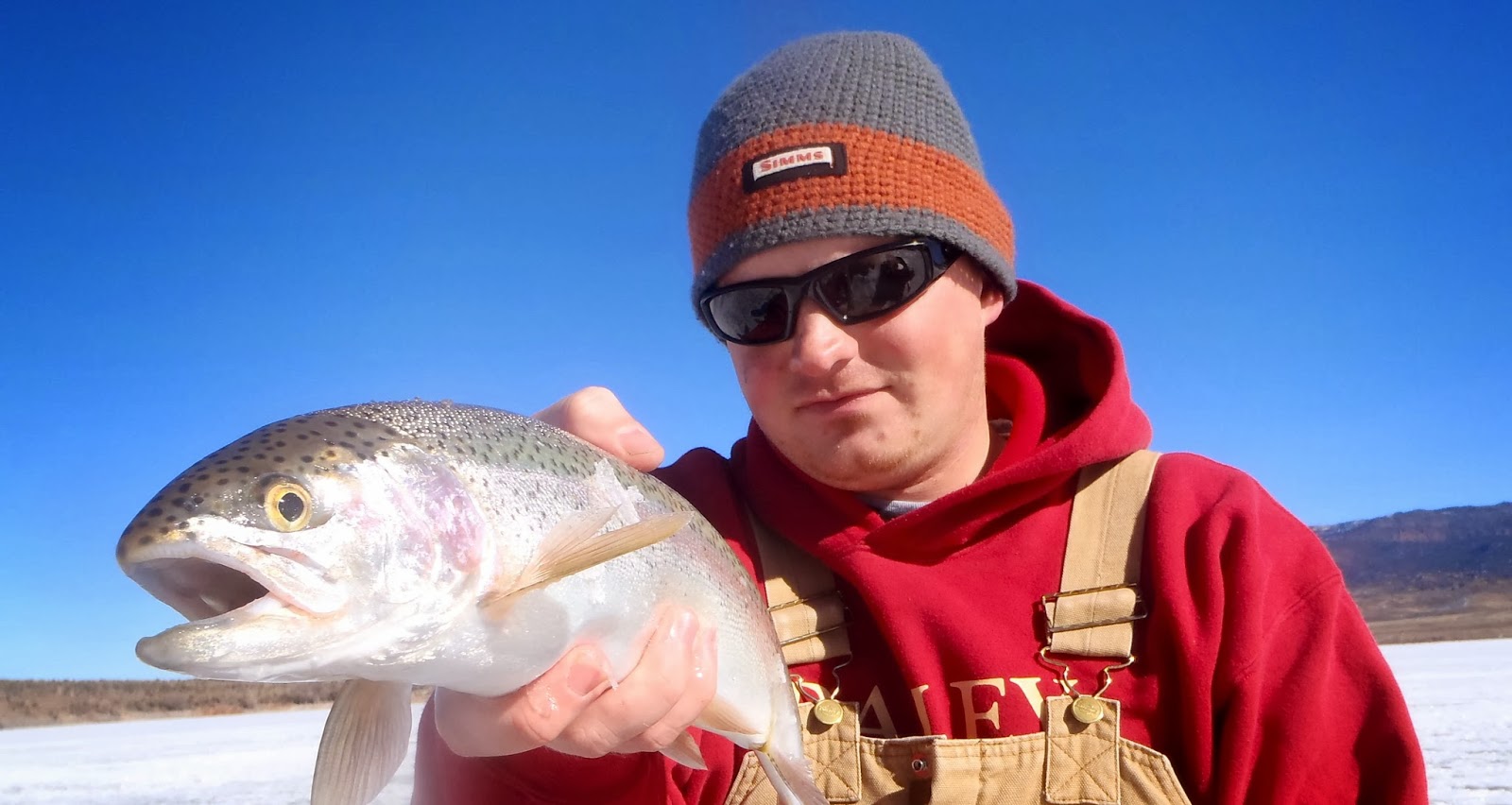 After a couple of hours we each had caught some nice fish and it was time to make our way back home. Can't help but wonder how good the fishing would have been if we'd have started at the second lake, but we'll never really know. All we can do is make more plans to take advantage of the ice while it's here, and pull out the kick boats once it's gone. Hope you can get out and enjoy the water.