Somehow, I managed to not have anything planned for an entire afternoon. Briefly considered staying home and tying some flies or something, but it seemed pretty clear that I need to take advantage of the opportunity and get out of the house. Luckily, the wife agreed.

The stream was in great shape until I passed a little feeder stream which colored the water. Before committing any further to the downstream section I stopped to see if the fish were going to be willing to play. The stream isn't too deep, so a dry-dropper system usually works pretty well. I chose an 'indicator' Chernobyl Ant, tied off the bend about 25"-30" of 5x tippet to a Bulletproof San Juan Worm, another 12" of 6x to a bead-head Prince Nymph to the whole rid down. The rig casts better than most would assume and it didn't take long to find a willing fish to come to the SJW. 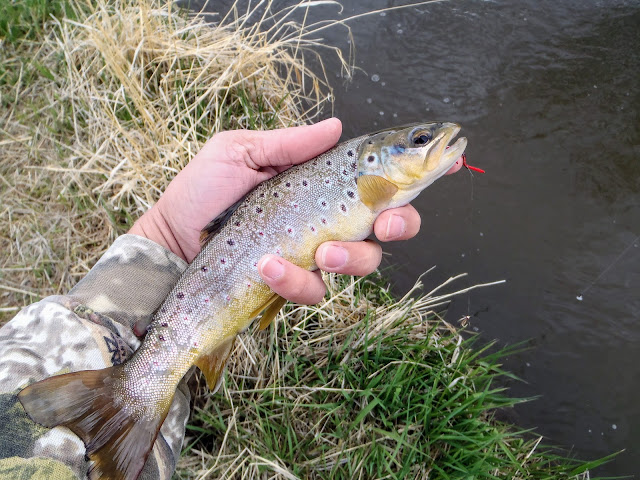 That was enough for me to know I'd have a chance further down, so I wrapped my leader around my reel and hooked my last fly to the stripping guide to make the walk. The clouds were threatening, but I have a rain slicker in my vest just in case. It's this kind of insurance that I would miss if I decided to lose the vest. Yes, I do carry more gear than anyone really needs for a day of fishing, but I don't forget things as often because it's all in my vest.

Once I reached my intended turn around I spotted a fish rising just a little further down. There were some obstacles that I'd need to climb over, but a rising fish seemed like it was worth it. In the process of getting into position I took too long and the fish stopped rising. I hoped it had more to do with the sun peeking out from behind the clouds than my intrusion on his spot. I worked my way a little lower where I could cast to another likely spot but keep an eye out for his return. A couple of fish tried to distract me while I waited. 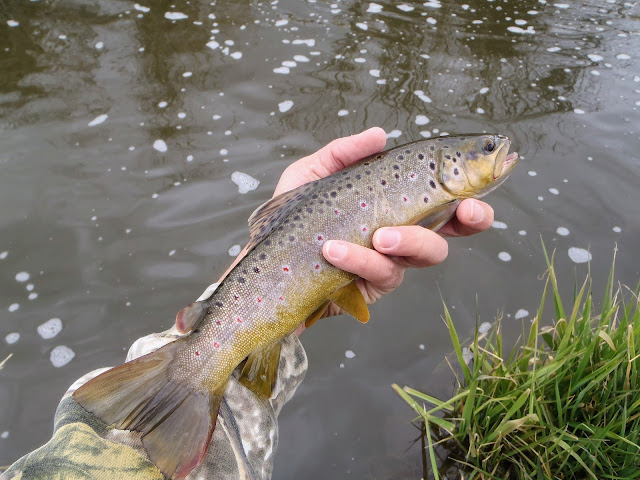 Right when the sun ducked behind a new bank of clouds I spotted a nose come up to sip a Blue Winged Olive from the surface. I clipped off the dry-dropper rig and added some 6x to the end of my leader while he continued to make a living at the tail end of the riffle. There were two more fish just above him that seemed to be of a smaller size also coming up. A Para-Quill seemed like a good choice, so I tied one on with an improved clinch knot and sent my first cast well behind the fish to try and gauge the distance. Now for the real deal, one false cast to make sure the fly was dry well behind where the fish was feeding so I didn't spook him, then I dropped the fly two feet in from of him and slightly off to the side. I raised the rod tip once his nose was back in the water after the take, sure that my 4wt fiberglass rod would protect the delicate tippet. I did my best to play him out below the other risers and it didn't take long to get him in the bottom of the net. 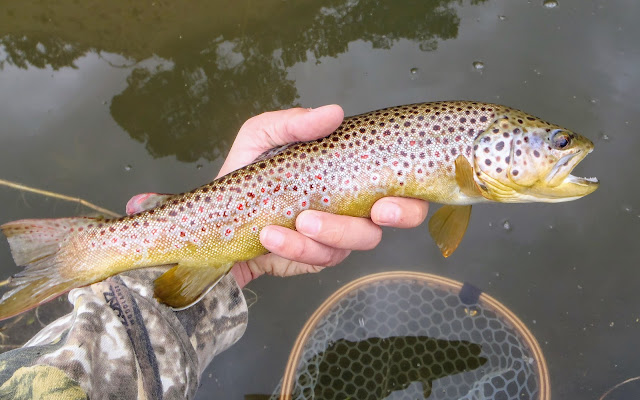 I managed to miss and spook one of the other risers, but brought the lead little fish to hand before moving upstream and changing back to my dry-dropper rig. For a change, I decided to cross the stream below a couple of big pools and try fishing them from the opposite side. While this vantage point reduced my ability to see into the water, it helped conceal me from the fish who were ready and willing to try my Prince Nymph on for size. 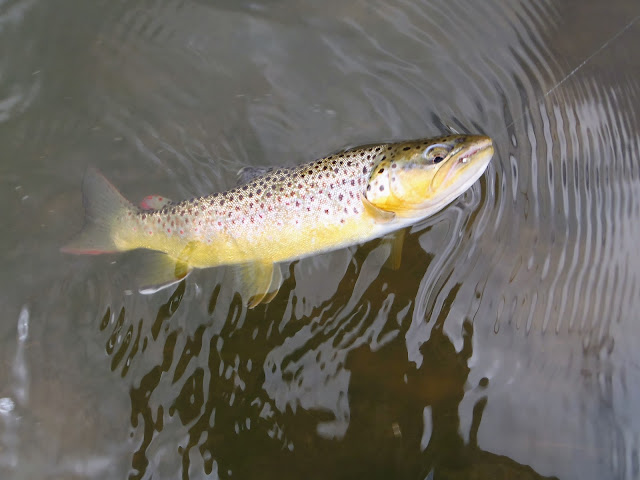 It was in this stretch that I lost count of how many fish had been fooled. Nothing of size, but all healthy, eager browns. Enough fish seemed to prefer the Prince that I exchanged the SJW for a small pheasant tail. Once above the dirty feeder creek I fished the series of beaver dams finding fish in each one. These are a new addition to the stream, and while I enjoy fishing them the landowners have plans for removal that are already in motion. Either way, I'm just glad to have a chance to chase fish here and am thankful that the landowner has opened it up for anyone to have a chance at having such a great day. 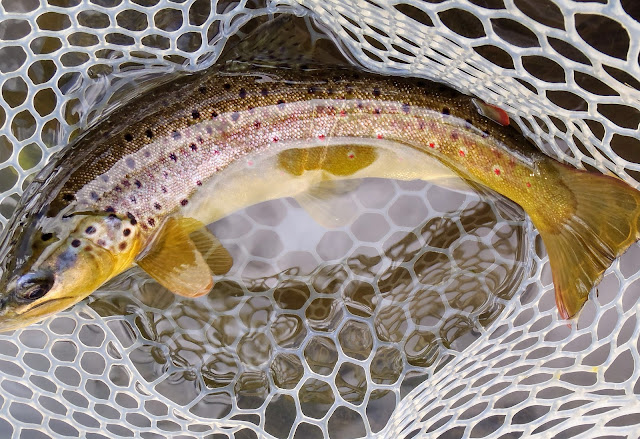 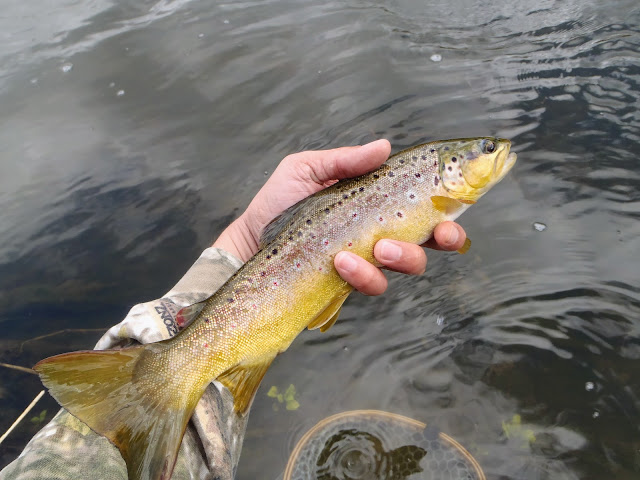 Too Busy for Browns?

Spring break has been this past week and while I did have some time away from work, I didn't have much time to get out and chase some fish around. I agreed to play saxophone on a project that the University of Utah is working on, David Maslanka's 10th Symphony. That means that not only have I been driving up to Salt Lake City for rehearsals, but also putting in quite a bit of time in the practice room (the practice room is also my fly tying room, so I usually tie a fly or two during breaks). Yesterday, I had a rehearsal that started in the evening so I had a little time to stop and fish on the way up there. I figured I could stop somewhere for about 40 minutes and not risk being late. Even during the drive I was still thinking about not risking a stop (I hate being late) but the lack of people at a spot that I used to frequent was too much to resist. In order to keep it quick I didn't put on waders and just rigged up my rod as I walked down to the water, on went a Prince Nymph under a big foam dry. 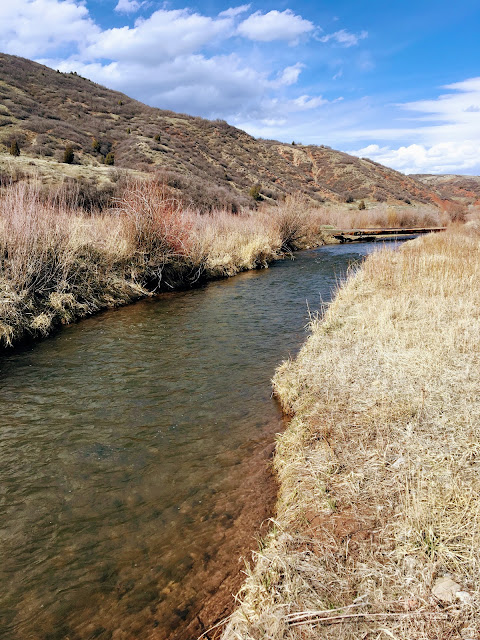 The first likely spot was a nice riffle just below a pool and it didn't take more than a couple of casts to find the first willing fish. The fish put a nice bend in the fiberglass rod and made the stress of scheduling lift from my mind. 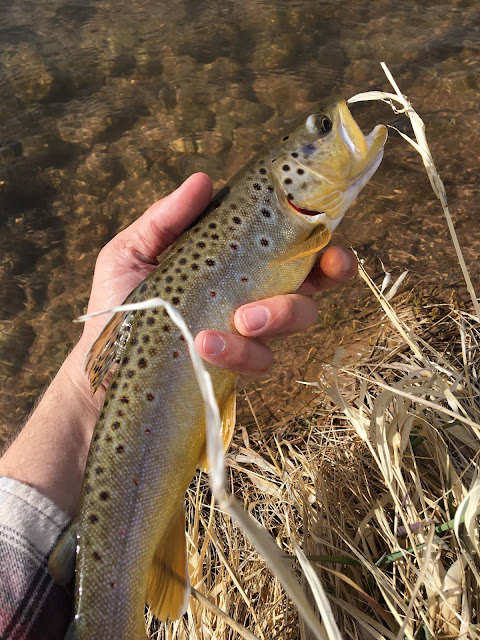 Working my way upstream I spotted a fish working the top side of the riffle and he didn't need a second look to decide that the Prince Nymph looked good to him. Quickly to the net, and I was starting to wonder what was going on. I flipped a rock and the very active bugs let me know that there was a lot of feed in the stream and the fish were definitely tuned in. 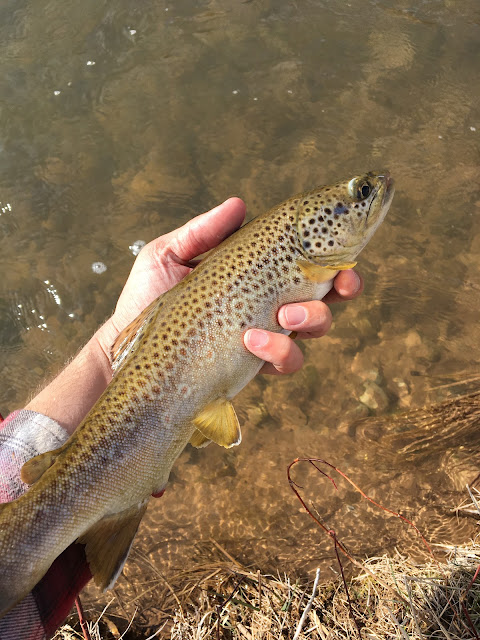 In the pool I had to work a little more but a fish next to the bank gave me a good hook up and I was happily connected to another great looking brown. I had to work a little bit to get him in the net, but it didn't take too long. Once he was there I unhooked him and threw my flies back out into the current and eased him into the water. I wanted to make sure he was ready before letting go, but apparently he felt good enough to eat my fly again! I felt sorry for the fish as I had to re-land him. 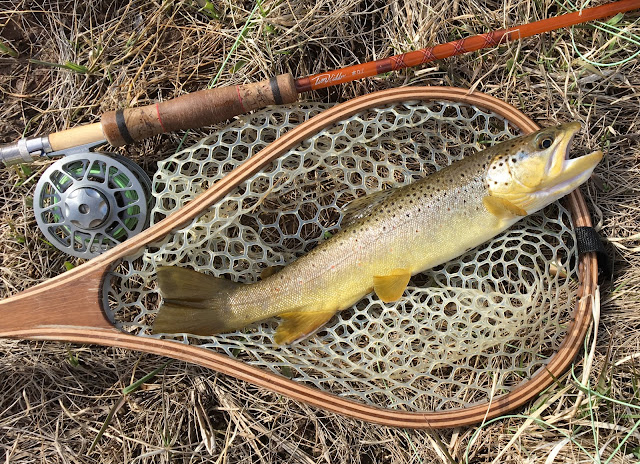 I hardly ever catch a fish on my last cast but this day (can this short of a time on the water be a 'day'?) the fish-gods were definitely smiling down on me. The fourth fish came in quickly and I returned him as fast as I could. I took down the rod as I walked to my car and made it to rehearsal with no problems. Glad I took the time to visit the stream.


Hope you're as lucky,
Kidder 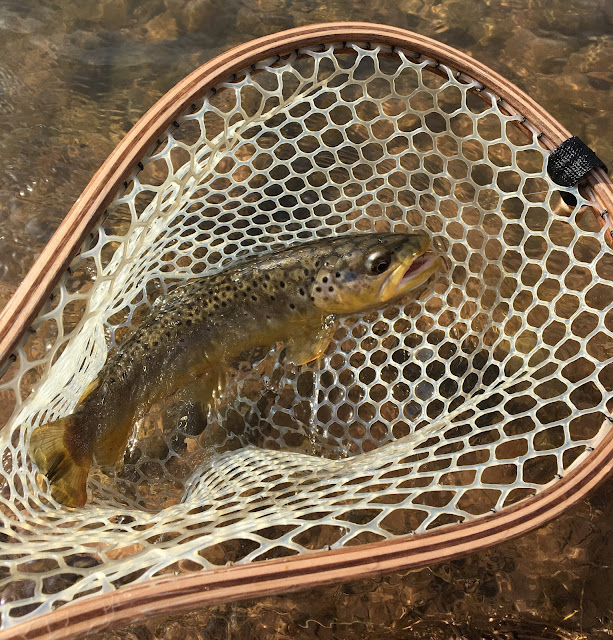 Posted by Tim Kidder at 7:14 PM No comments: