In Utah, there is no 'Off Season' or at least no closed season on trout fishing. Certain waters do get closed for parts of the year to protect spawning fish, but there's always somewhere to wet a line if you're feeling the itch and can withstand the cold. That's IF you can withstand the cold and a lot of people I know refuse to get out there and freeze. I can't really blame them, it's not much fun to bundle up so much it's hard to walk just to chase after a few fish that you'll most likely release anyway and come back with no feeling in your extremities.

But there are some advantages to winter fishing. For one thing, there aren't as many people out on the water so you can go to the popular tailwaters without it feeling like combat fishing. The people who are out are just as crazy (or crazier) than you so they either won't bother you at all or you might actually be able to have a decent conversation with them. These aren't your tourist fisherpeople, these are the hardcore, committed, obsessed, crazies that can't help but fish every chance they get. In other words, these are your people and they probably won't take time away from freezing just to talk to you.

Of course, it's easy to find reasons not to go fishing. Projects around the house need doing and if you get them done while it's cold out maybe you won't have to work on them when the weather is nice and the fishing will be better. Laying the flooring in my basement seems to be the project that never ends, but it will, and hopefully, before the temps regularly rise above freezing and the bugs (and fish) become more active. Of course, once the flooring is done there will be doors, trim and more painting to do. There is always something and it's easy to let it keep you home. 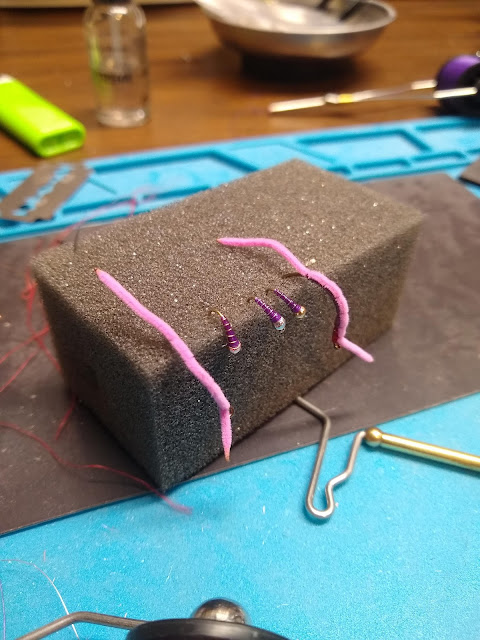 So you don't let anything keep you home and get out there despite your internal dialog that says it's a waste of time. What you find is the weather isn't that bad through the middle of the day and it's nice to be outside again. Whether or not you find fish is a whole other issue, but it really is nice to be out there doing it instead of spending inordinate amounts of time tying flies and thinking about fishing. Sometimes it works out and you manage to catch some fish, sometimes even on dries. Just like that. Days that work out make you wonder why you haven't been getting out every chance you get. Then there are the days that you don't even see a fish and it seems to confirm that you haven't been wussing out, just biding your time until the weather and the fish are more hospitable so it's not a waste of your time, money, and effort. Working around the house watching birds and the mule deer that sometimes wander through the yard does wear thin though....maybe I'll go fishing tomorrow. 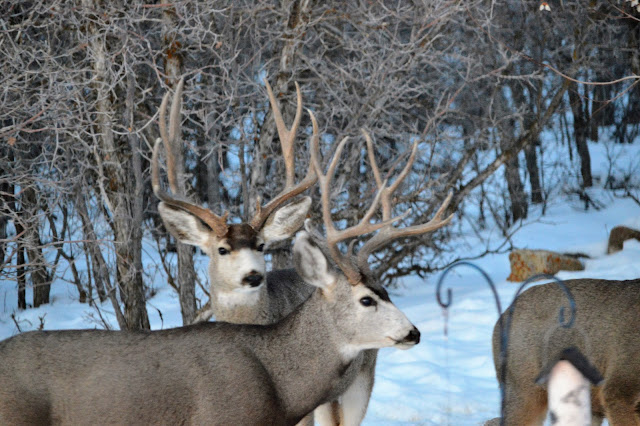 Posted by Tim Kidder at 9:05 AM No comments:

Ever have the feeling that if you didn't move quick you were going to miss out on something? I felt like if I waited to go fishing I'd end up not going and would regret that because a busy January is waiting for me on the other side of the break. Weston and my Dad said they had to wait until later in the week so Jeff and I decided to head out without them. The drive was long and pretty sketchy in spots but we made it in time to do some fishing the first afternoon. Right away we were both on the board with little rainbows, Jeff's came on a nymph rig under an indicator and mine on a woolly bugger. 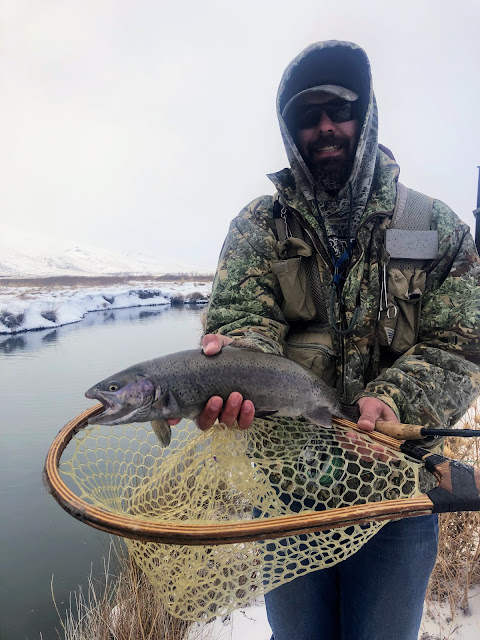 We weren't finding the size of fish we'd hoped for, so we changed spots and Jeff found a nice fish right away. Unfortunately, I was fishing quite a ways away from him, and with frozen guides, he was having trouble landing the fish alone. I got there in time, but when I went to net the fish Jeff's line caught on my back and the fish got off. He was/is pissed, but I'm not sure what I could've done differently. To help ease the pain of a lost fish I let him net the fish I caught only a few minutes later. 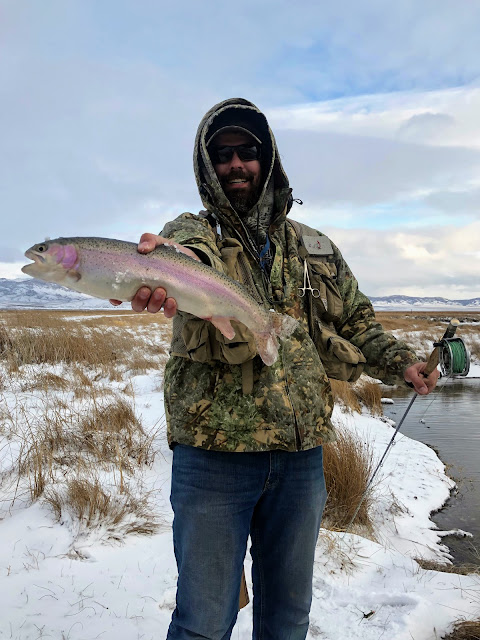 I worked away from where Jeff was, making it up as I went without much luck. He didn't call me over to help when he hooked into a nice rainbow and a decent little largemouth bass!?! 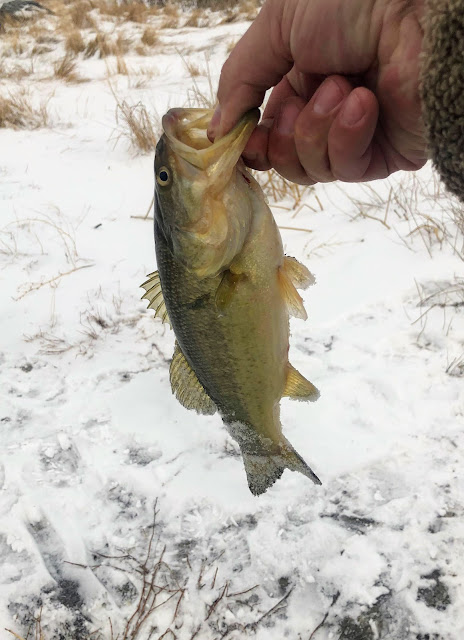 With nothing happening elsewhere, and Jeff's disappointment eased by the catching of a couple fish, I went back to see if it was the location or my rig that was making fishing tough. I realized it was the rig as Jeff continued to have hits while I stood there looking like an idiot. Jeff suggested I try a streamer and I agreed, making the switch quickly. It didn't take long before I was hooked into another good fish. Thinking that maybe the code was broken, I moved back over to where I hadn't found any success before and almost instantly was hooked into a great fish. 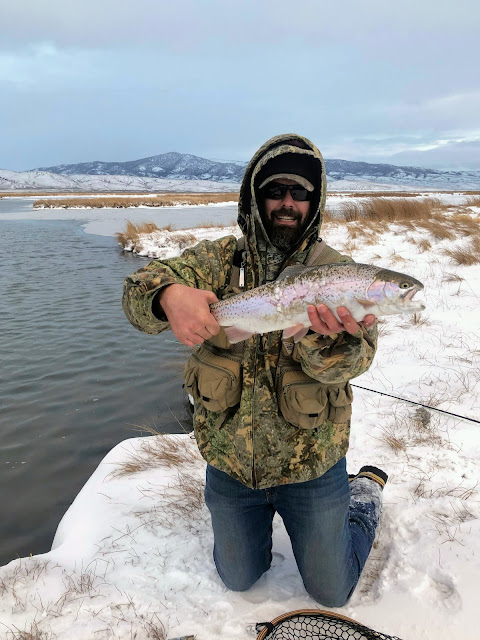 The fishing turned off cold again after that, so we ended the evening back where we'd started and Jeff found the fish just as willing, but they didn't like my streamer presentation. Back to town to find an overpriced hotel and a half-decent night's sleep before heading back and trying it all again.

The next morning we were up before our alarms and getting ready for a day of fishing. The beginnings of a cold had settled on me through the night, but I was still determined to get some fishing in even if I wasn't so comfortable doing it. The morning eventually came, cold and cloudy with an icy breeze that made me question why I do this to myself. We started where we had found the best-sized fish the night before, but only found a few smaller fish. We moved up to where we'd caught all the little ones and that's when we started finding better quality fish. Weird, they seemed to trade spots during the night... 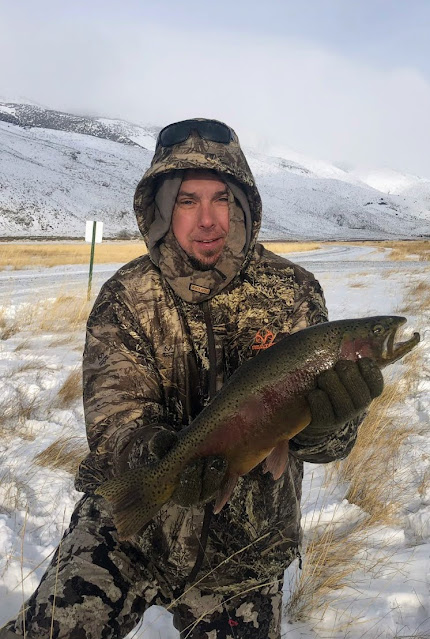 The wind chill was getting pretty uncomfortable so we decided to drive to another spot for a chance to warm up. Conditions were tough at the other spot with super spooky fish so we moved quickly to another spot that we knew could be great or really tough but it usually wasn't anywhere in between. The short walk was made a little tougher because of the snow on the ground, but we made it quickly to where we wanted to start.  Aside from a couple of medium-sized fish, there just wasn't much happening at this spot. 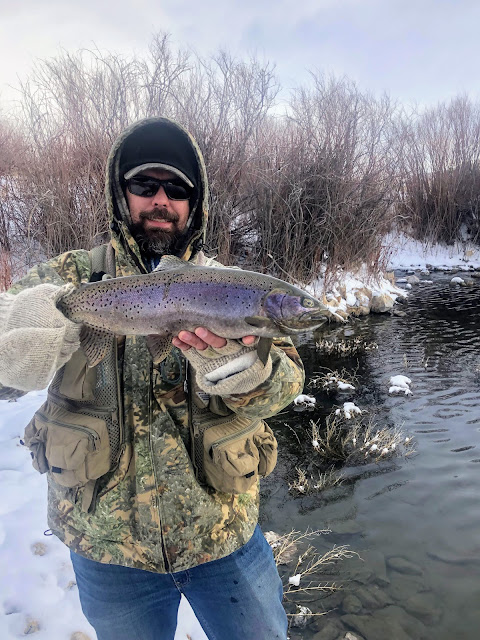 We decided to head back to the truck and plan our next move, but we spotted some fish on our way back and couldn't help but make some casts at them. It didn't take long before I was hooked into the nicest fish of the trip! 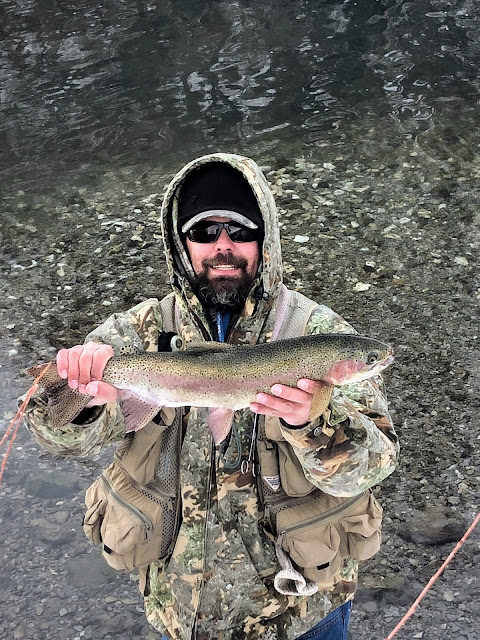 With that success, Jeff was interested enough to climb down the bank and join me, but after a few casts his line got hung up in the willows behind us and somehow his fly rod got broken. He seemed to take it really well, maybe because this was the 3rd time this rod had broken on him. I couldn't help but make a few more casts and was rewarded with one last fish. 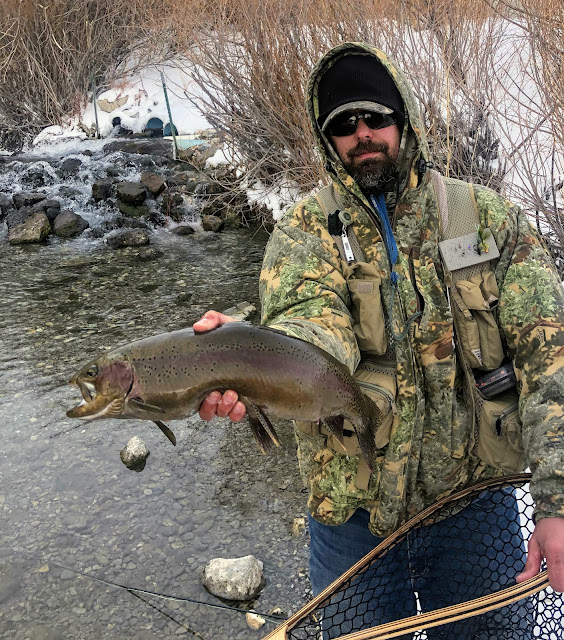 At this point, the fish were wise to our game and I was feeling pretty sick so we walked back to the truck. Once we were there with the heater going we discussed our next move. I did the math and realized that if we left now, we could be home before it got too late. Jeff wasn't too keen on the idea, but I think he realized how sick I was feeling and agreed to head for home. It was a long drive, but the trip was definitely worth it despite the weather and how it left me feeling.

Posted by Tim Kidder at 7:27 AM No comments: