Mass Production at the Vise

Without any opportunities to fish lately I've been trying to catch up on my much neglected tying.  Since this is a mission to turn out large quantities of flies it has gotten me thinking about what I do to try and speed up the process.  Here's my take on mass production at the vise:

Stick to one pattern - Decide what fly you're going to tie, and stick with that one pattern.  Preferably in only one (or two) sizes.  This helps you get the proportions right, figure out a sequence for the best and fastest results, and keep the desk tidy by only using a select number of materials.

Get organized - This sounds a lot harder than you have to make it.  First off, you don't have to organize everything you've ever owned to make this tip effective!  You just have to get organized so that you have what you need at hand, when you need it.  Clean off your tying station, and only lay out the materials that you'll be using for this particular fly.  You'll be searching less, and getting more production for your time.

Do a lot of one thing - It doesn't matter if we're talking about putting beads on hooks, cutting foam, or tying knots in pheasant fibers, if you do them in sets (of 6 or 12 for example) then you won't have to stop and do that step in between every fly.  Chances are when you're focused on one step you'll be able to do them faster and more effectively.  This also helps you to feel like you're getting more done, which is a huge motivator to keep after it.

Inventor? - Not every session should be devoted to inventing the next great pattern.  Great inventions of all kinds are great because they fill a void.  First comes a need, then an invention to meet that need.  Get proficient at tying the standard patterns and get out there and fish them!  If there's an issue on the water that needs to be addressed, then you have your motivation for some experimenting.  A word of caution is needed here: Flies have been around a long time, and many great tiers have put in some serious time addressing their needs.  Sometimes tiers think they need to solve a problem that's already been worked over a hundred times.  Look for the solution in someone else's work before putting in hours just to find that you've re-invented a fly that has been around since before you were born.  Not saying that there aren't issues that have yet to be solved, just throwing in a little advise.

Tie often - If you're someone that doesn't have a ton of time (like all of us) it's hard to find an unused couple of hours out of any day to devote to refilling your boxes.  Also, if you actually had a couple of hours you'd probably go fishing!  So tie for a few minutes everyday, or every other day.  If you have the stuff out for a specific pattern it's not a big deal to sit and crank out a few.  Pretty soon you'll be filling your boxes without making a huge time commitment to your vise.

Do it right, or do it twice - There's no reason to settle for how a pattern turned out.  If it sucks, take it apart and do it again.  Otherwise you'll just end up with a bunch of crappy flies that you'll avoid using while you're out on the water.  If you're consistently struggling with some step on a fly, look for help.  There is so much fly-tying information available to us on the internet it's almost embarrassing if you don't look up a video to help you out.  If all else fails, go to the fly shop!  The guys there (generally) want to see you be successful!  You're success ensures future business for them, they want to help you, you just need to ask.

Most importantly - Make sure that you're having fun.  Tying your own flies adds a lot to the fishing experience in my opinion, but I know several people who could care less who tied the fly as long as it works.  If tying your own flies isn't for you then no worries!  The main point of all this is enrich your life, not add one more thing to it that you don't enjoy (there's plenty of those to go round).

Hopefully this gives you some ideas to make you a more effective fly-tier so that you can enjoy your time out on the water.

Over the weekend I had the opportunity to play two gigs with my quartet.  Which is great, but left some serious down time on Sunday.  Yep, had a hard time finding something to fill in that time...really tough.

Got to the trailhead a bit later than I had hoped but still had time to put in a couple of miles into the Uinta Mountains at the Crystal Lake Trailhead and find some brookies that were looking up for a Red-Butted Renegade. 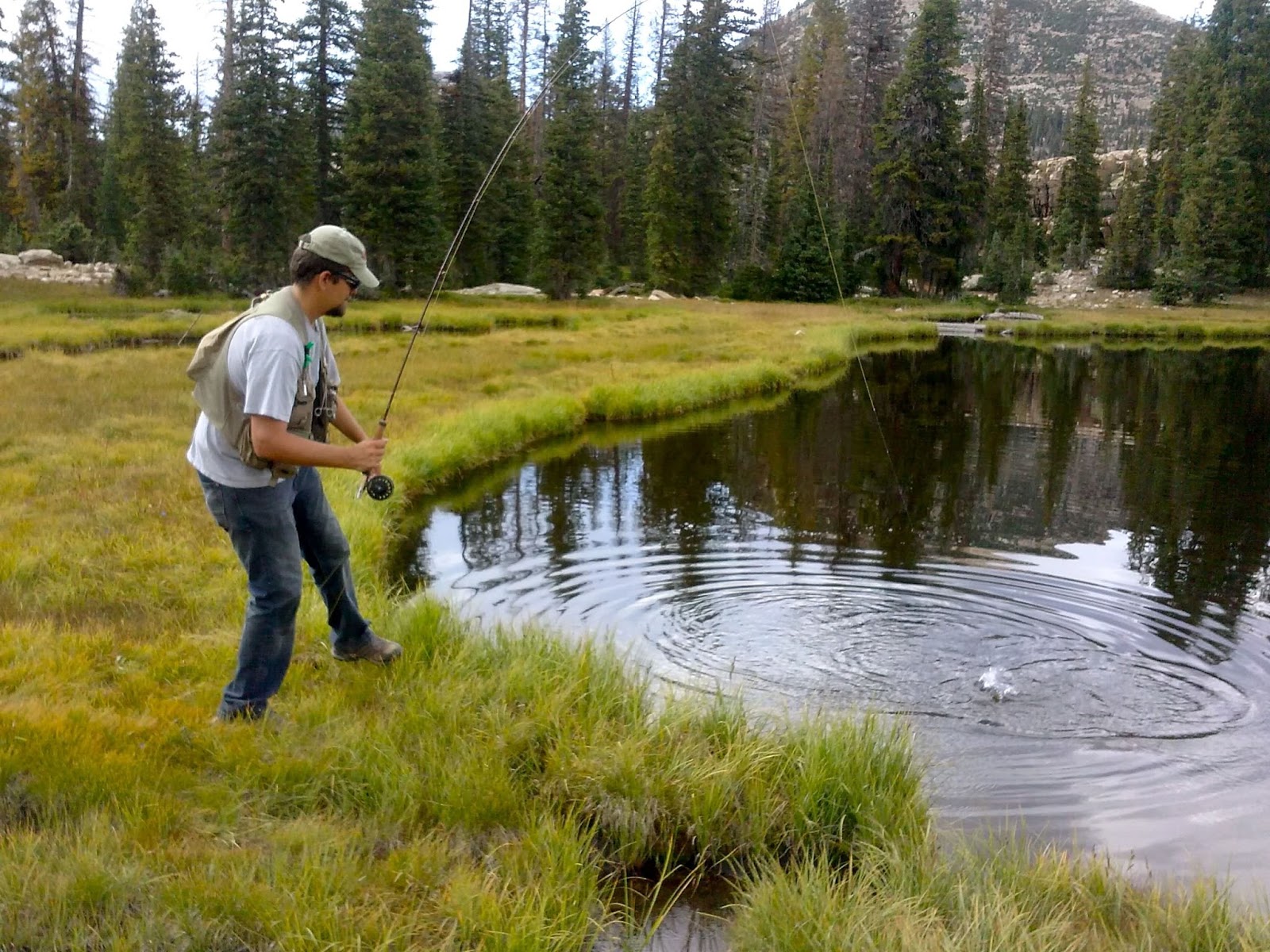 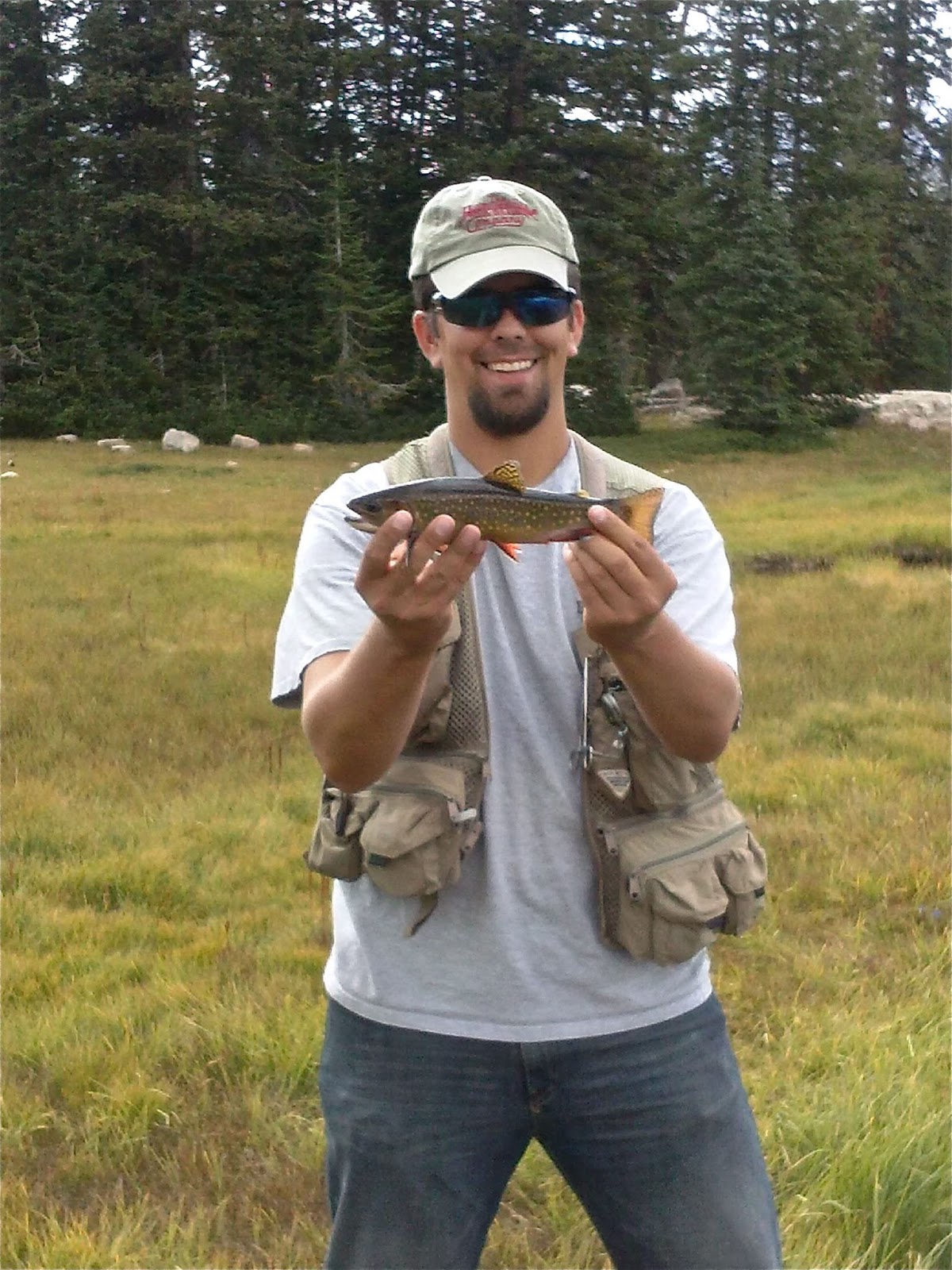 Loved being back in the Uintas.  Can't believe that I haven't been there in so long, and totally plan on making a return trip soon.  I was almost late to the gig, but figure it was totally worth it.  Hope you can get out and enjoy the water.
Posted by Tim Kidder at 8:40 PM No comments:

After saving all of our $5 bills for almost a year, the day finally arrived when we loaded up the family and drove all freakin' day northward. 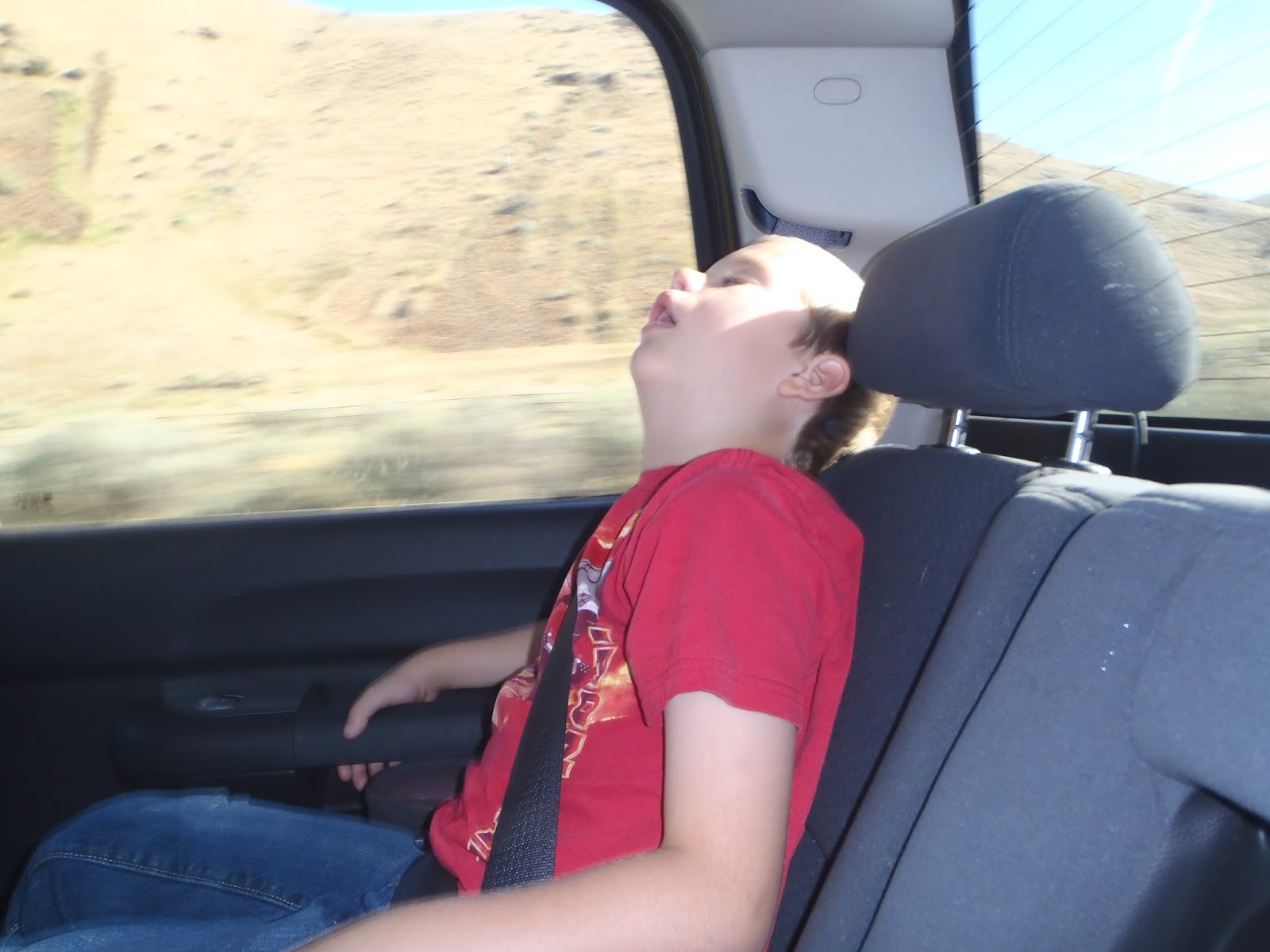 A mere six (or so) hours later we made our first stop to show the kids Bear World, and while it's not my favorite the kids sure loved it. 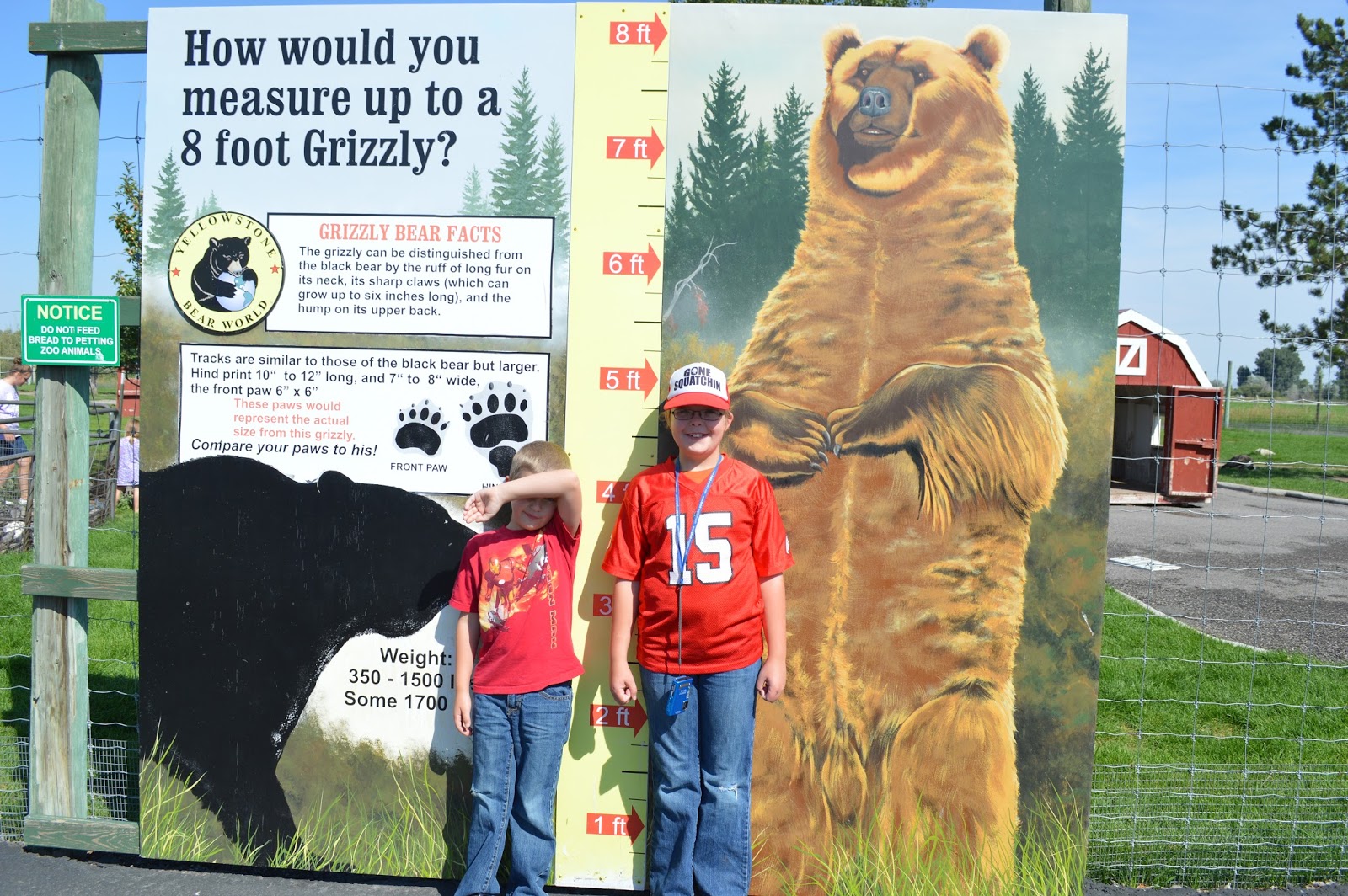 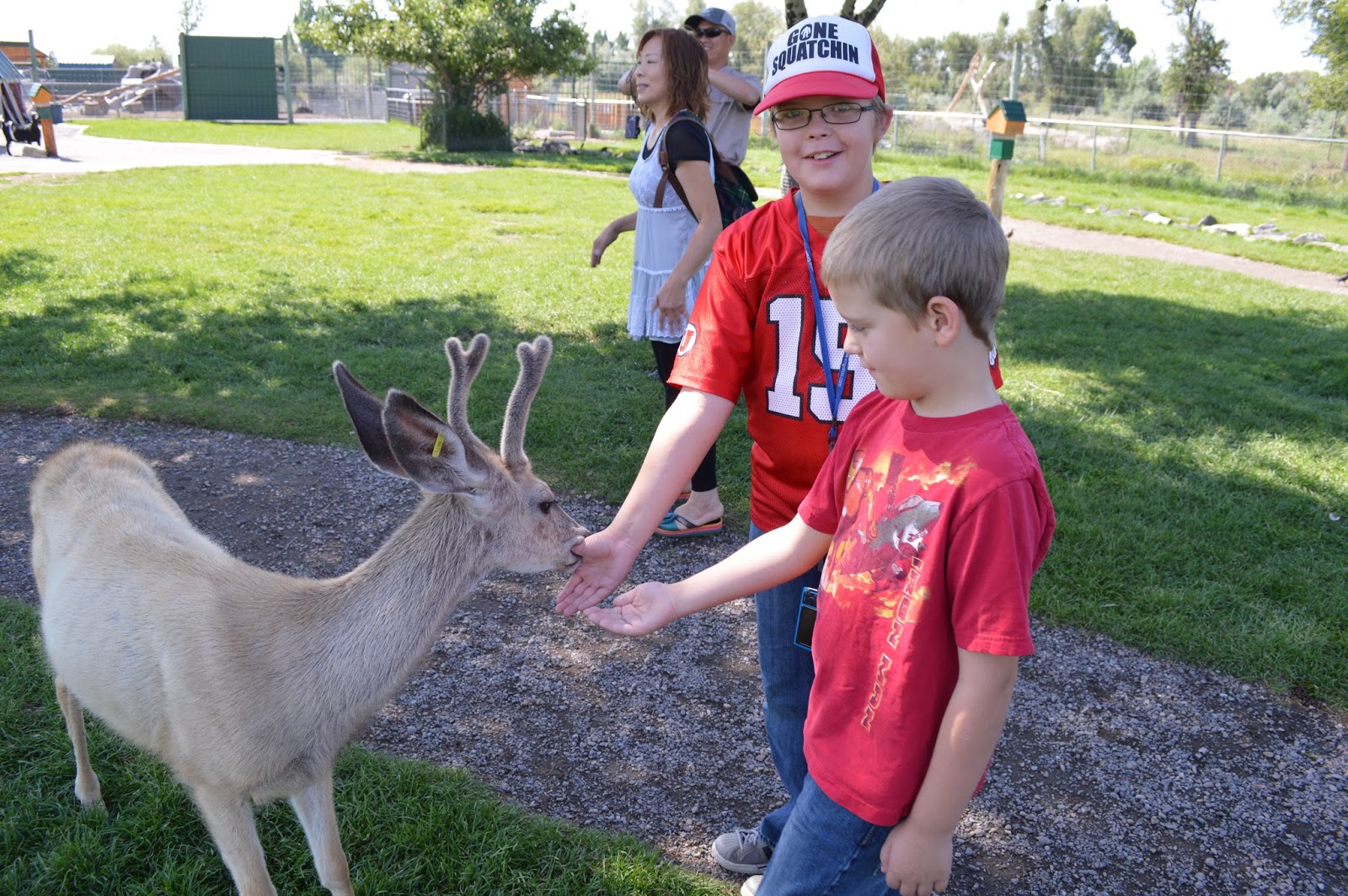 On to Yellowstone!  Day one was dedicated to the geysers and hot-pots, though we seemed to fall into a waterfall theme. 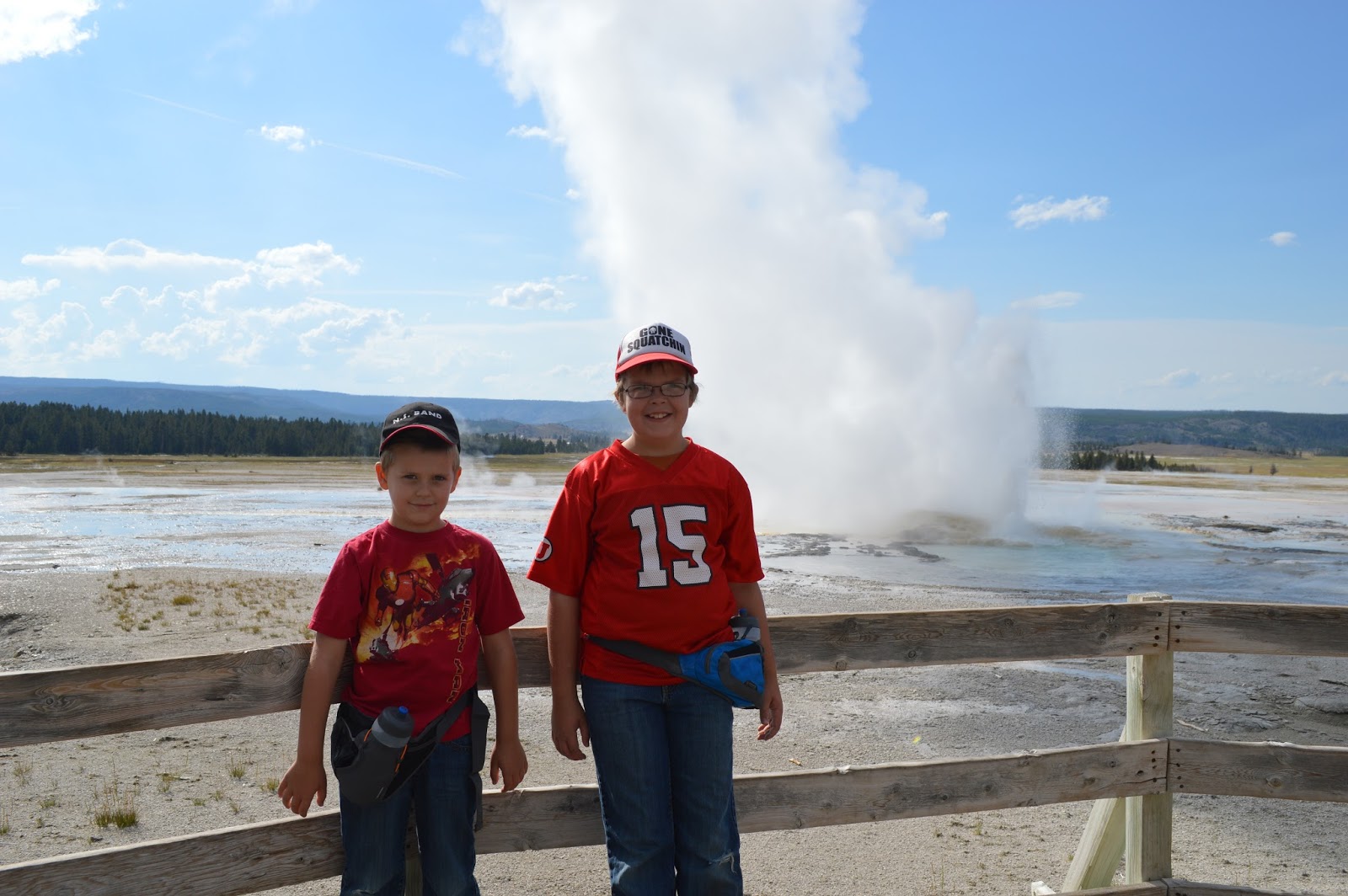 Even with all the family sight-seeing time I still managed to get in some fishing at the great mecca of flyfishing.  The first opportunity to fish came up in the Lamar Valley on a cloudy afternoon.  Upon finding the Lamar River a bit overcrowded for my taste, Soda Butte Creek fit the bill with a nice stretch that looked lonely enough.  This being my first time fishing Soda Butte I was surprised to find a stream with such a gravely bottom, especially because of the meadow clearing that I was fishing.  No matter, the fish were willing and I was ready after looking at so many great looking streams.  A size 16 Adams was the ticket to some beautiful Cutthroat trout.

The next morning I let the family sleep in for a couple of hours to try my luck on the Firehole River near Madison campground.  I found no love on top, but actually had some good action on a deep Mod-Hare's Ear. 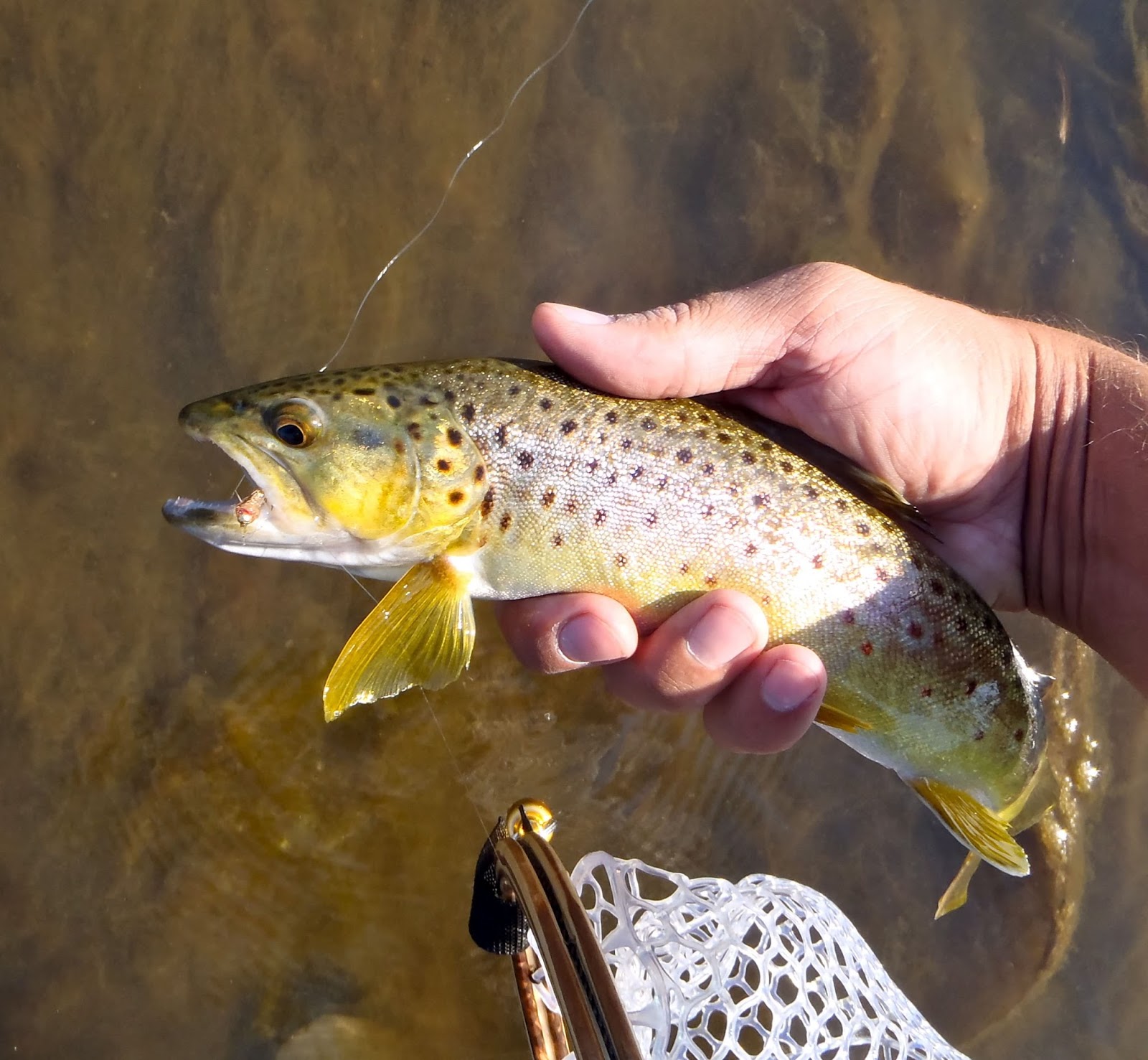 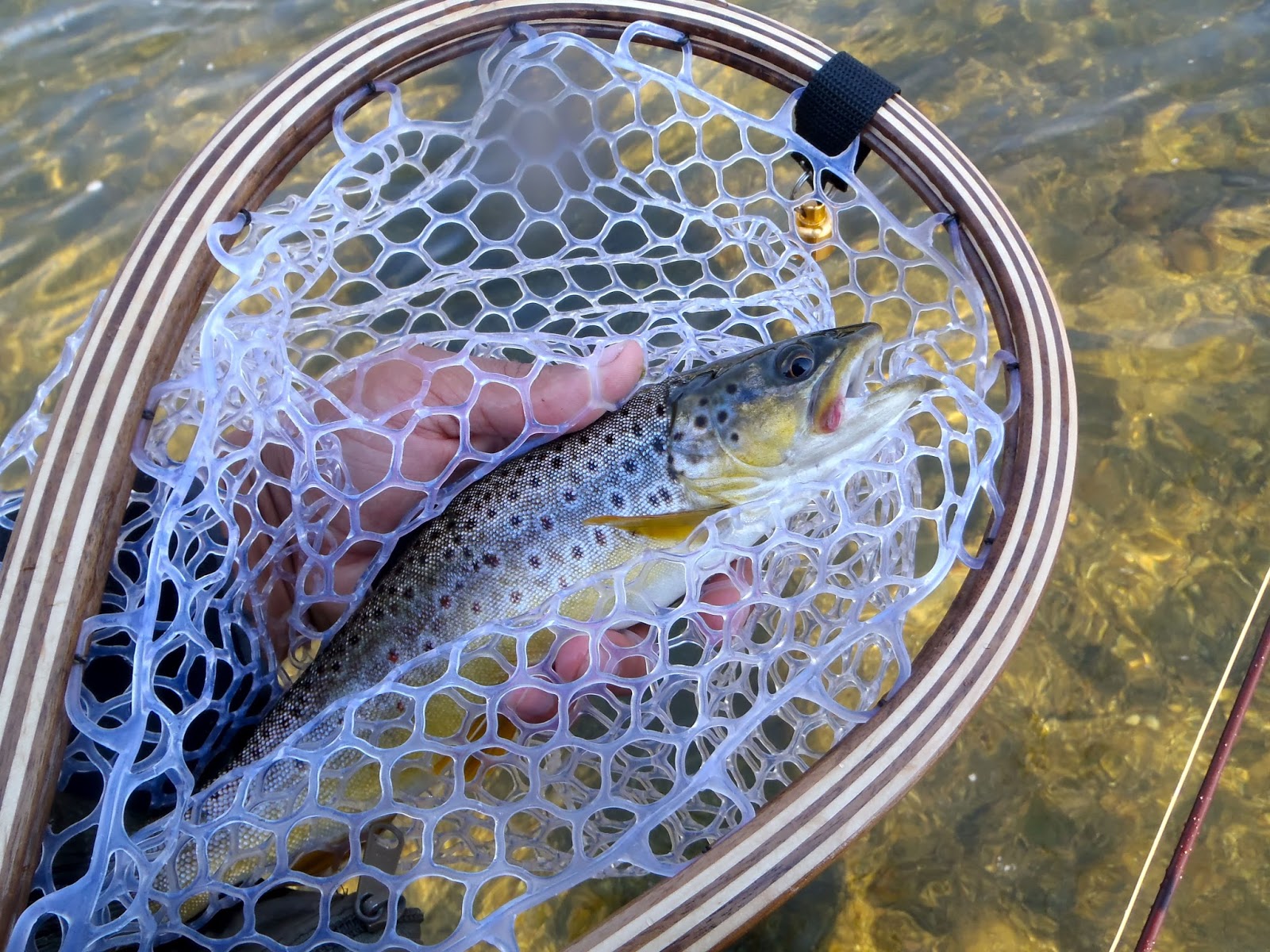 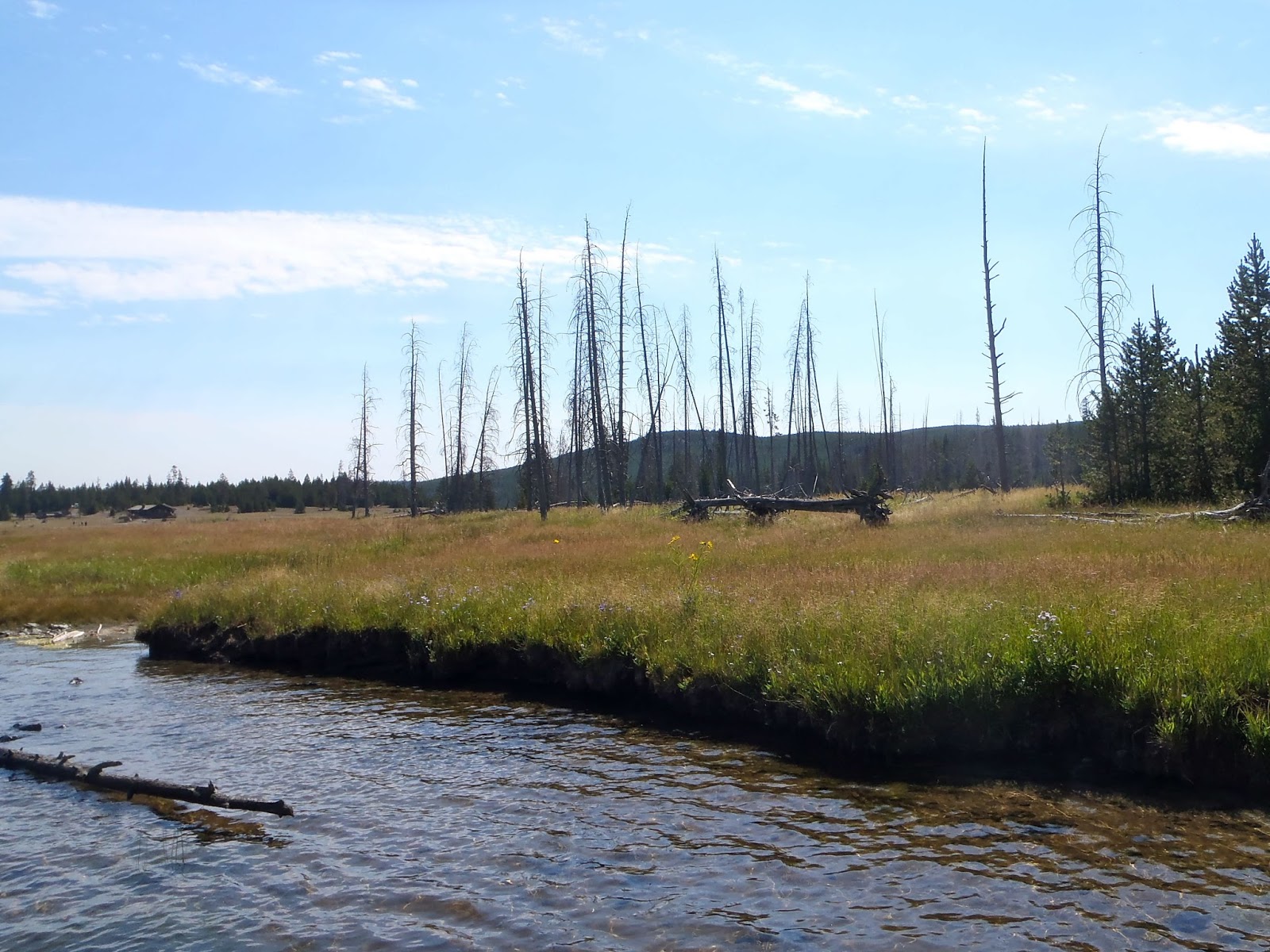 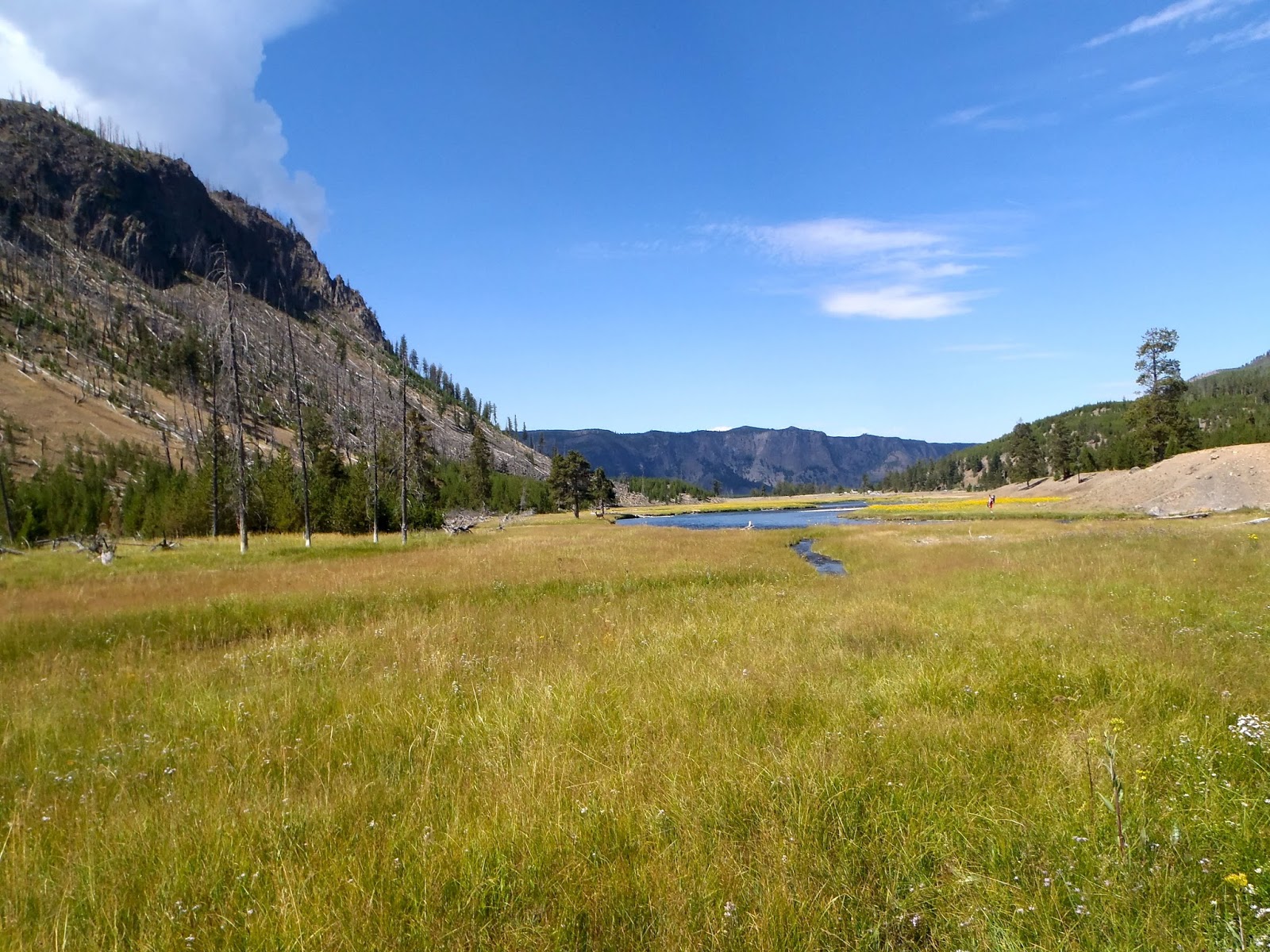 On our last evening in the Park we took a walk down by the Madison River and enjoyed seeing some Elk as a nice spinnerfall mixed with some caddis to feed the locals.  I didn't fish, but enjoyed taking it in with the family.  It was the perfect end to a great family trip, hopefully you can get out and enjoy the water.
Posted by Tim Kidder at 3:12 PM No comments: 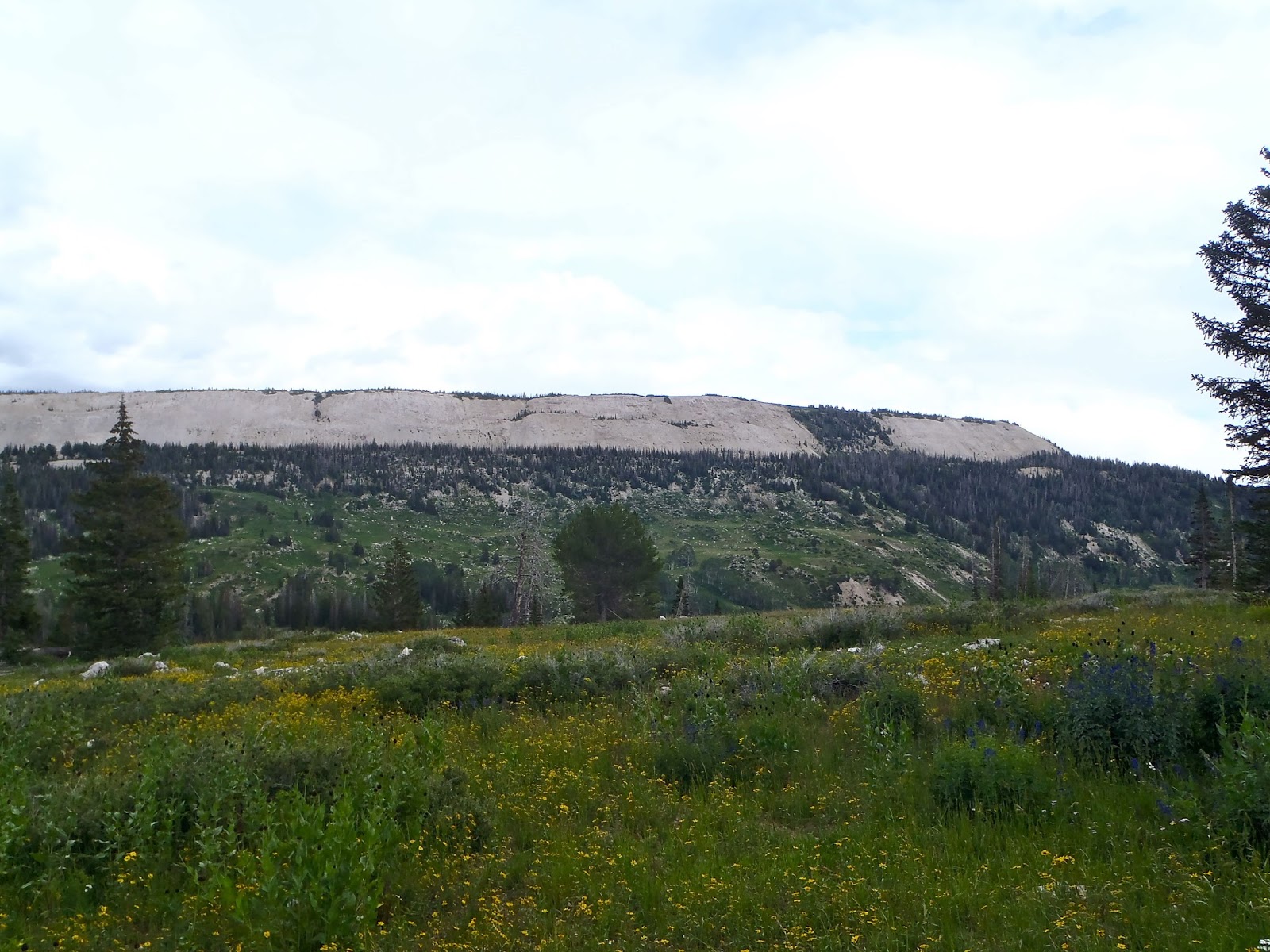 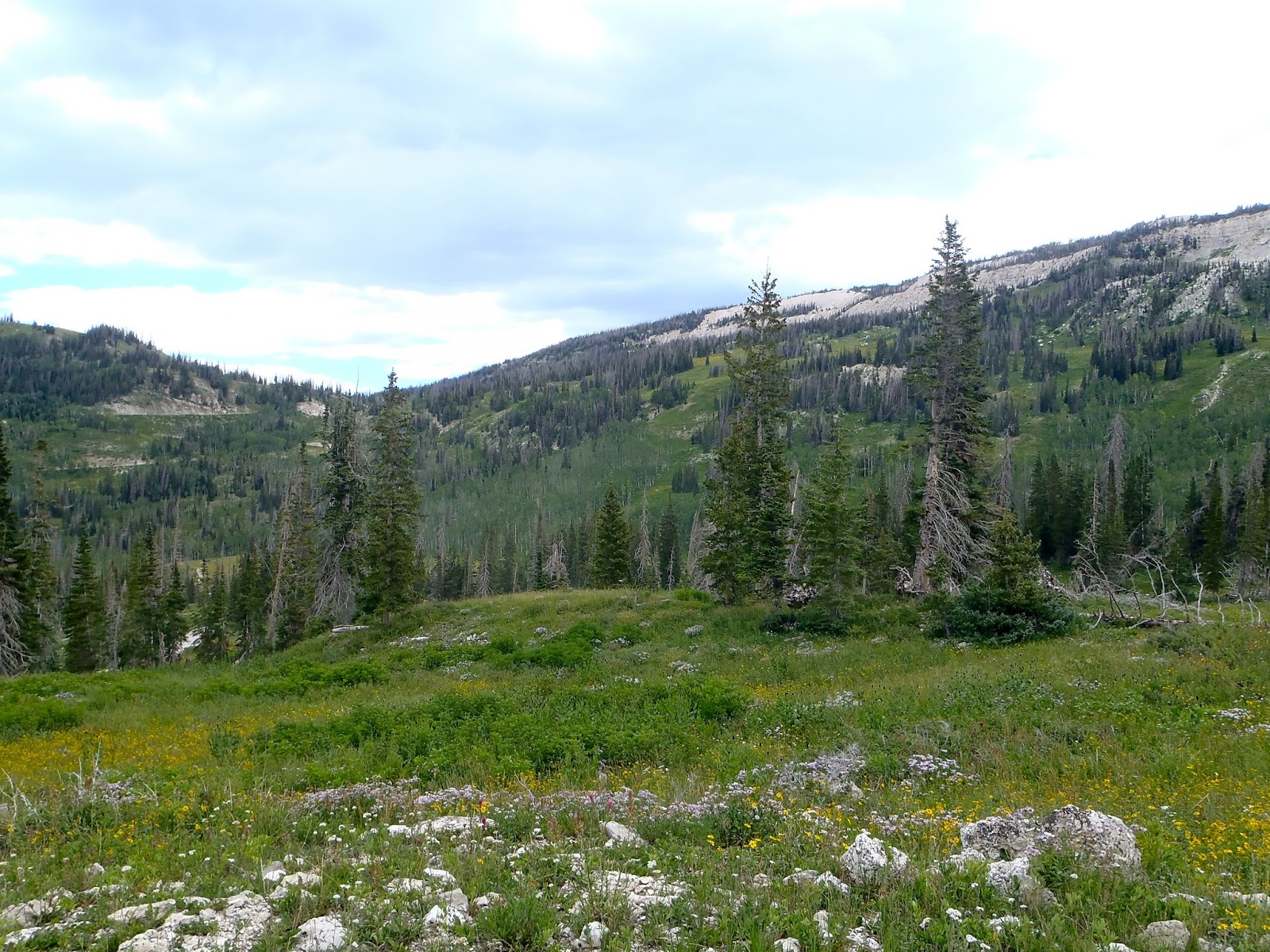 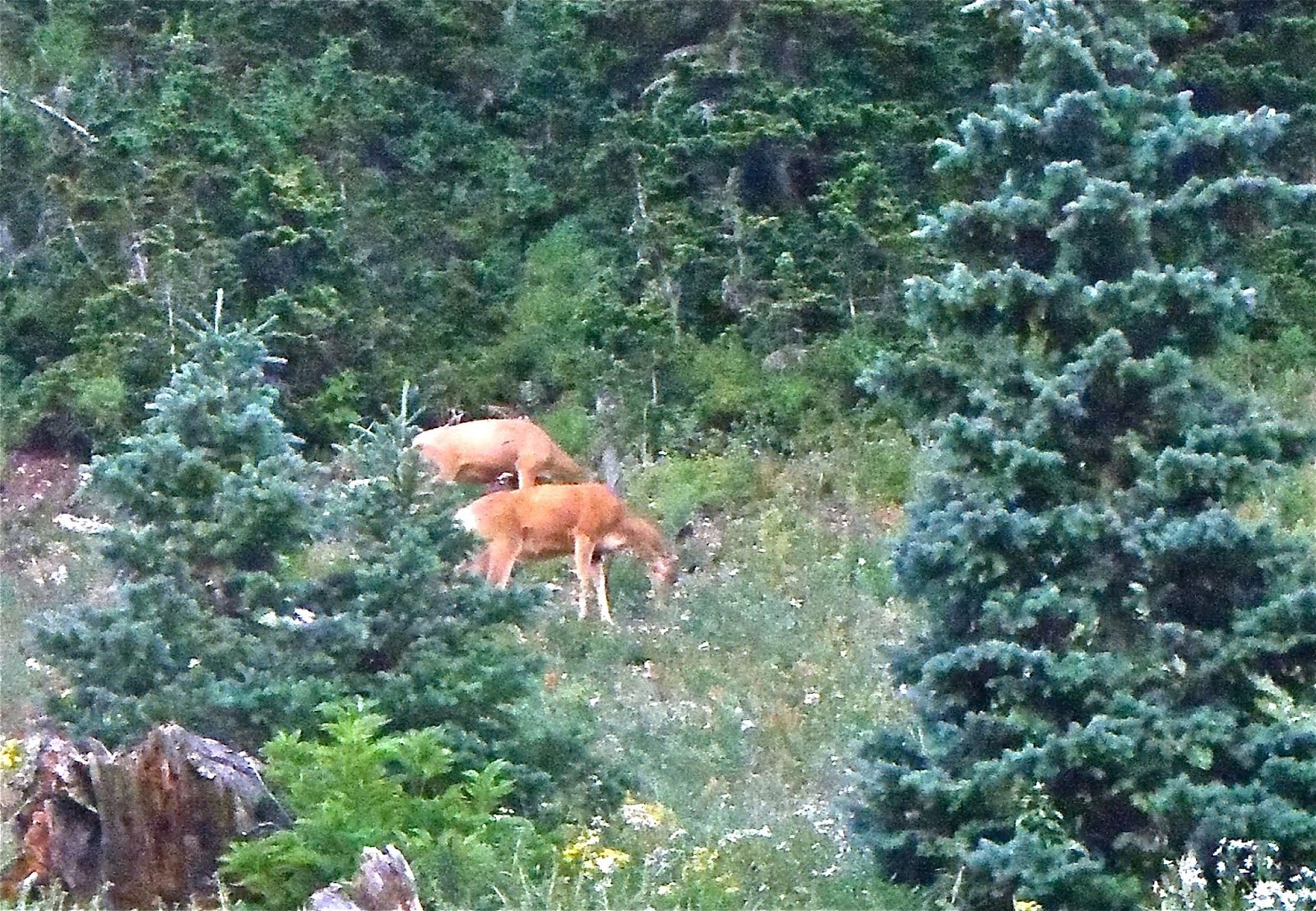 Posted by Tim Kidder at 8:59 AM No comments: