A couple of weeks ago I was hired to be an adjudicator for a music festival at a nearby school for their region festival. While I was there I talked to Lane's wife for a minute and she asked if I'd go out fishing with Lane so she didn't have to. That's definitely a request that I can help out with! Fishing with Lane is always fun, and I always learn something from him. With both of us being music teachers you'd think we'd spend a lot of time talking shop about our jobs, but both of us fish obsessively and have plenty to talk about our piscatorial pursuits.

As seems to be par for the course lately, I didn't really have a plan when it came to the day's pursuits. I didn't even text Lane until about 9:30 in the morning and was really glad when he agreed to put up with me joining him. I set out pretty quickly after that, hoping to beat the weather but the blizzard that I drove through persisted for most of the day.

First stop for the day was more to check water levels and clarity, though we did manage to get the skunk off quickly. Lane started out with a Griffith's Gnat and a Zebra Midge dropper and got the fish's attention from the get-go. I had on a large Ant for an indicator and an electric green Zebra Midge for a dropper.

Second stop had a good stretch of water and a promising looking beaver pond that we spotted from the road. After a short hike we approached the dam from downstream and found a couple of nice spots to try. After a small fish the green Zebra turned off cold, but Lane found some willing trout with a brown Wooly Bugger. The pond itself was probably the deepest water we fished all day, but it seemed void of life. Above the pond, as is often the case, there were more ponds that held willing fish. Some had to be left alone because we couldn't figure out how to get a fly wet through all the trees and willows. Lane seems to really like this type of fishing, and I do too but a little goes a long way and I like to have a back cast now and again.


As we worked through the bush we traded off fish except when I wasted my turn by getting stuck on a log. Lane caught five or six while I watched. To his credit, he did offer me his rod but even when I finally agreed to give it a go the fish knew I wasn't deserving. These fish were stunningly beautiful, like they were still colored up for the spawn.


We decided to drive upstream to another spot that Lane likes to fish but the low, clear water made fishing difficult and the best part of the day was behind us. Lane managed a couple of rianbows in this stretch and I got my last fish for the day, a small brown. It was obvious that the day was over, even if we weren't entirely ready to stop. I'm really hoping that this is the first of many trips with Lane this year. The guy knows how to fish, casts extremely accurately, and can spot fish better than anyone else I know. I can learn a lot...

Posted by Tim Kidder at 5:37 PM No comments:

The weekends seem to keep getting filled up with work, chores, errands, and honey-dos that have been making it hard to get any fishing in. Mid-day Sunday it seemed like the bulk of the most pressing work had been checked off and the warm, cloudy weather had me thinking about the stream. The wife was more than ready to get me out of the house so I loaded up and made a mad dash to take advantage of the daylight still left.

The rings from the rising fish seemed like an image pulled straight from my day-dreams (though in my dreams there were definitely more of them). I tied a Quill Parachute onto some 6x and high stepped into position to avoid pushing too much water. First cast laid the fly just behind where the most accessible fish was rising, but the second cast was on the money. A quiet sip, a lift of the rod tip, a quick fight and I had my first fish on a dry fly for the year. 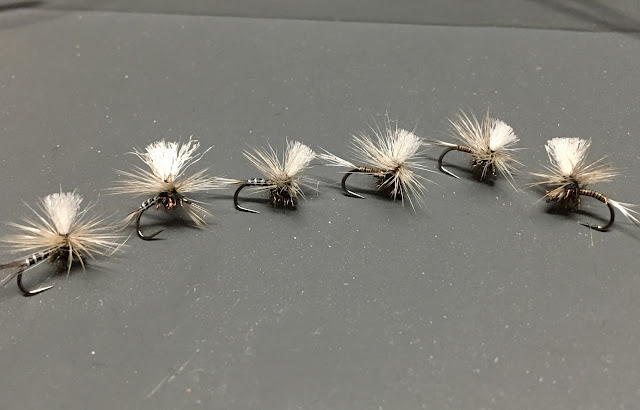 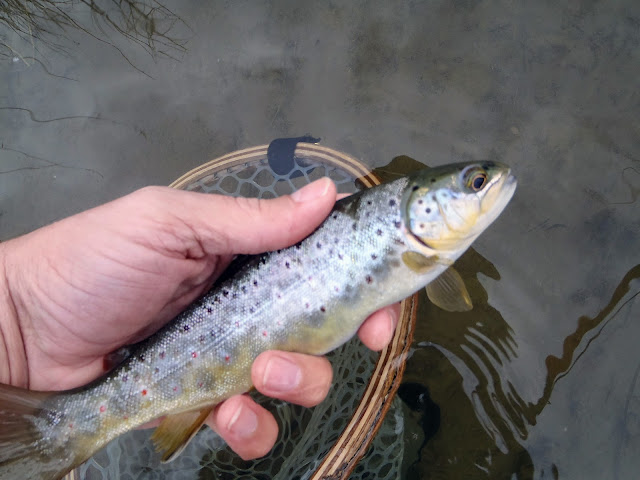 Too bad the little guy managed to put the rest of the fish in the pool down! I decided to hike instead of waiting for them to come back, and made my way to one of my favorite spots on this stream. Once I got there however, a large black cow had decided to wade in for a drink. She muddied up the water and scared a bunch of fish out of the hole. As they streaked away I noticed that there were a couple of really nice fish (for this stream) that I'd like to meet! Did a 180º turn and started fishing my way back to the truck. I decided to tie on a higher floating dry to support a dropper or two. Both the BH Prince Nymph and the Pheasant Tail found fish right away. 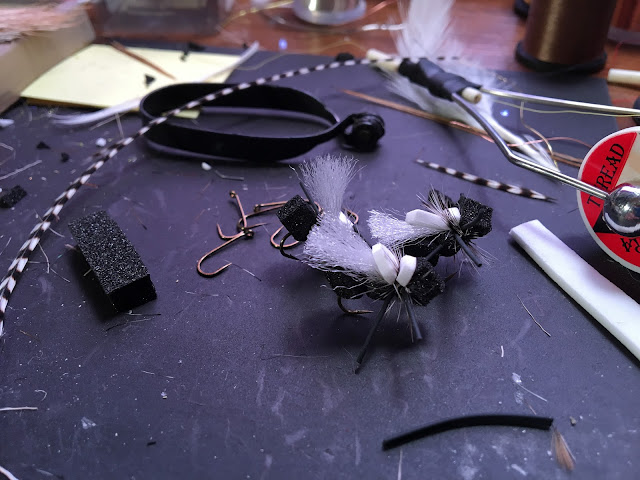 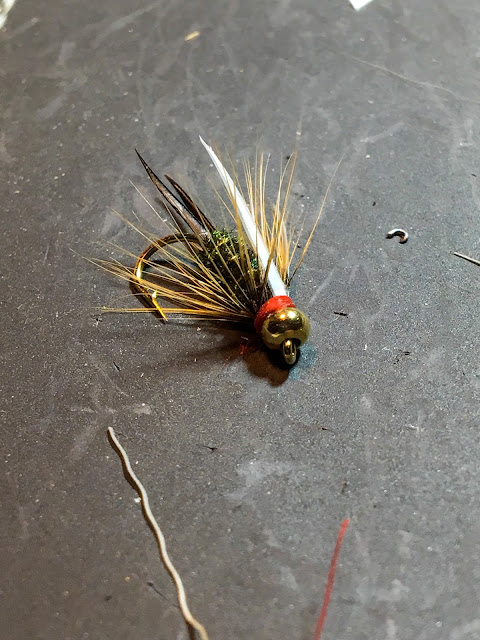 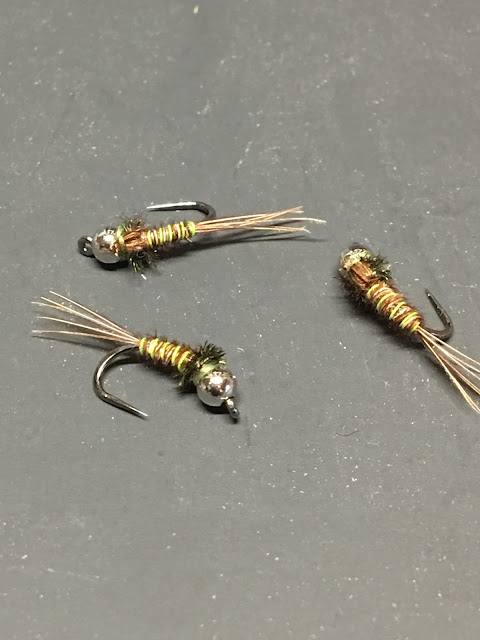 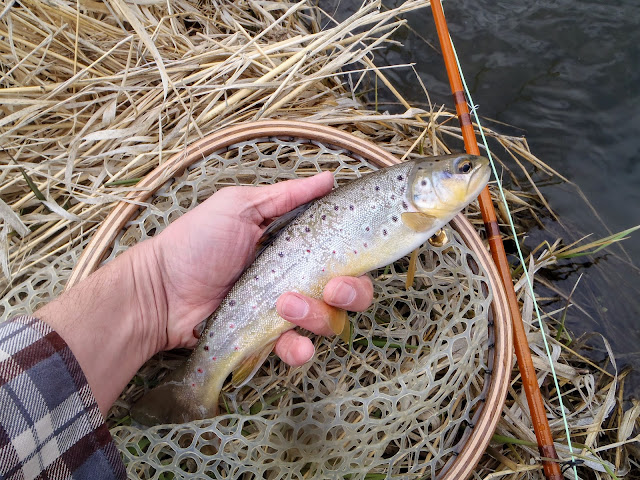 Fish seemed to be everywhere, and most were willing to take my nymphs pretty aggressively! It really felt like Summer with fish taking both droppers and even a few that came up for my big dry. 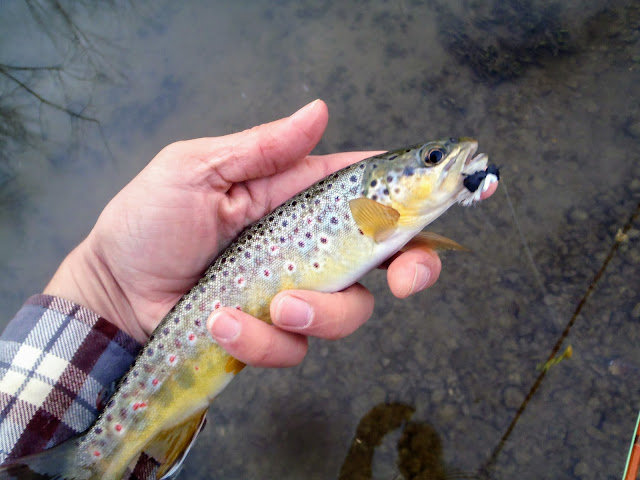 Nothing big, but a ton of fun. Fishing was so good that it took my attention away from my surroundings a bit more than usual. A sudden loud thump from just behind me brought my attention back real quick! A cow had snuck up behind me and then gotten startled when I went to cast. Once we both realized that the situation wasn't as alarming as it first seemed, she stood there and watched me fish until it was time for me to move on. 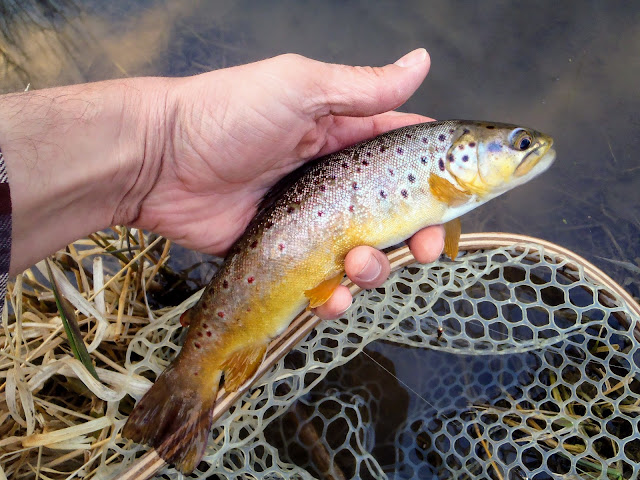 The sun was going down before I was ready to call it quits, but there wasn't much more I could ask of the day.
Hope you're as lucky,
Kidder 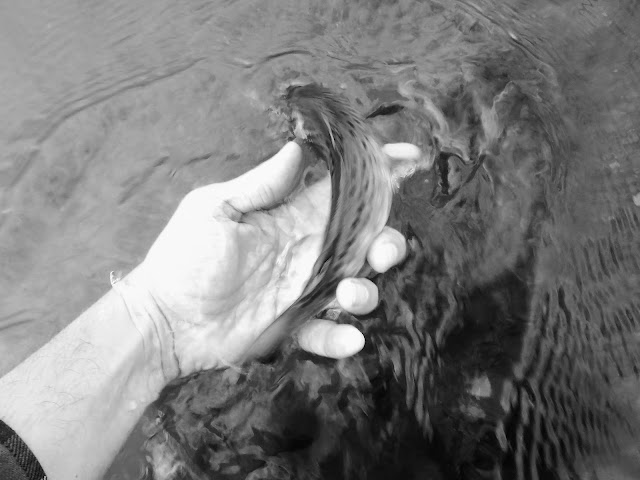 Posted by Tim Kidder at 8:27 PM No comments:

Here's a video of the trip Del & I went on! (view the original post HERE)

Kidder
Posted by Tim Kidder at 9:32 AM No comments: