As anyone with kids knows, time alone with your spouse isn't easy to come by. Not that our kids aren't amazing (they most definitely are) but spending time alone with the wife is a nice vacation from the kiddy table.

Where we were heading was one of my favorite wintertime spots to fish and a place that Delvonie hadn't been to before. Not overdoing the fishing time and intensity was something that I definitely have to work at, because I can easily over-do it and ruin the experience for Del. With that in mind, we got a little bit of a late start in the hopes that it would warm up a little by the time we arrived. Not exactly the way it worked, there was plenty of frost on the ground and the fish seemed to still be asleep. 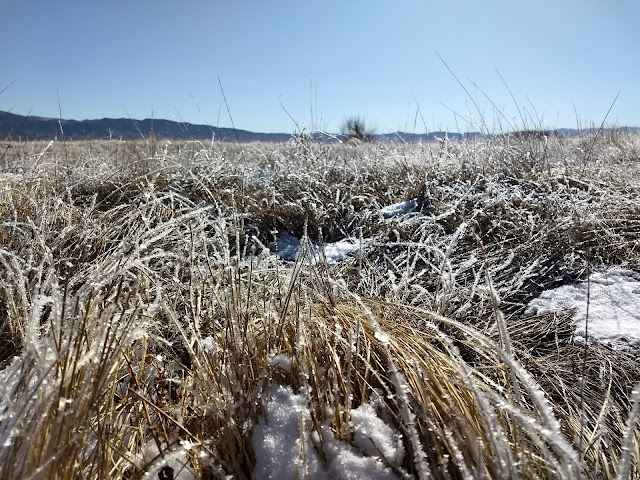 We weren't only there to have some fun, but also to try and get a fish for Del's Mother who asked for a fish for her birthday dinner. Usually, finding a fish for the dinner table wouldn't be a problem but it did add a little pressure to the fishing that I wasn't expecting. I figured a decent size to eat would be something around 15" as long as it wasn't unusually skinny. The first fish to hit the bottom of the net was definitely over that size, but I just didn't have the heart to keep such a great fish. 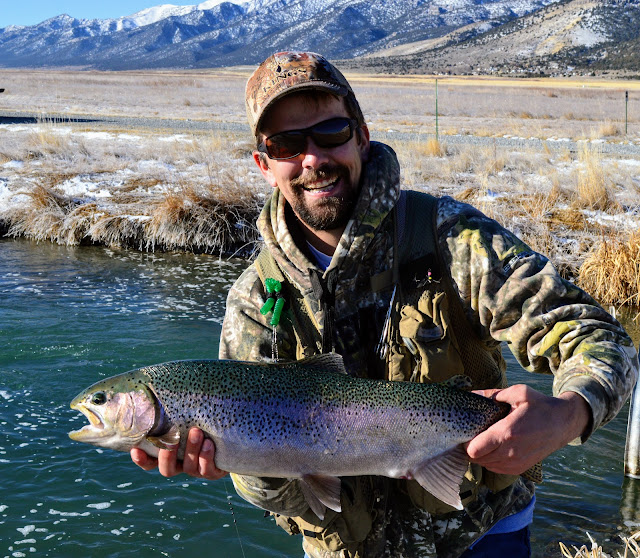 The fish seemed to be waking up a bit and it didn't take long for us to find another rainbow, one that was just about perfect for Del's Mom. I know some fly fishermen don't like keeping fish, but this fishery is one that can definitely handle some harvest. In fact, most of the places that I fish struggle with too many fish and could use some more selective harvest. (Read more about that Here and Here) Del got in on the action, though she isn't too comfortable with fly fishing. There is a pic of her with the fish, but she's not too keen on me sharing it... 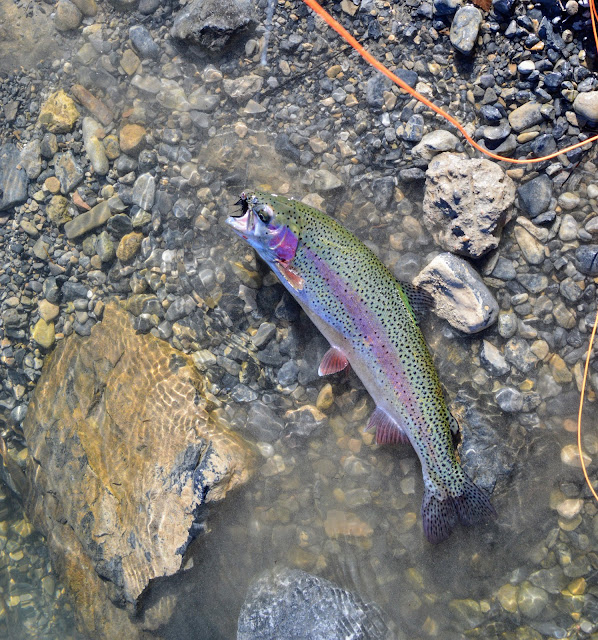 These fish are some of the prettiest I've found anywhere, and obviously some of the biggest. If you don't agree, just tell me where some better ones and I'll go compare! But seriously, these fish are really colorful and some of them even sport cutthroat markings under their jaws. I wonder if there are any cutbows here? (cross between a rainbow trout and a cutthroat trout). 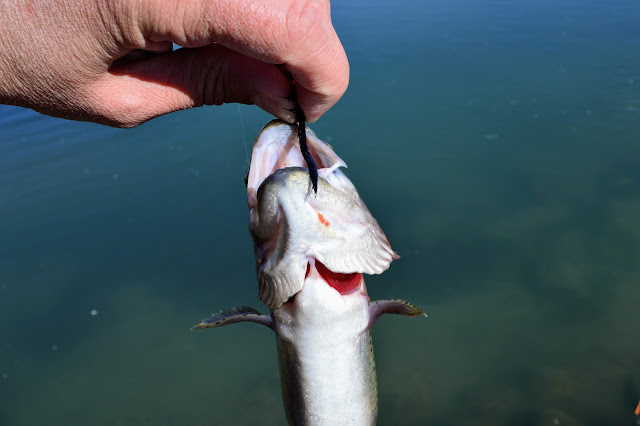 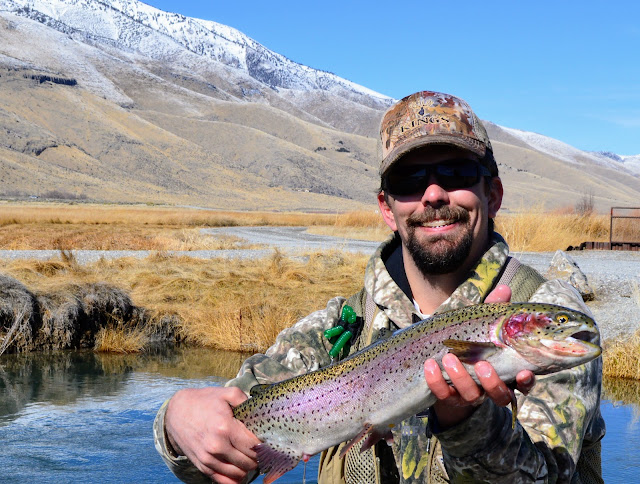 A few of these bows were dropping eggs already! The spawn is quickly approaching which would explain why fishing has been so good. Pre-spawn trout are some of my favorite to fish to because of how aggressive they can be. The wind started to pick up which made Del retreat to the truck for warmth, and her book, but the fishing really started picking up for me. Several fish came to hand, including my only tiger trout for the trip. 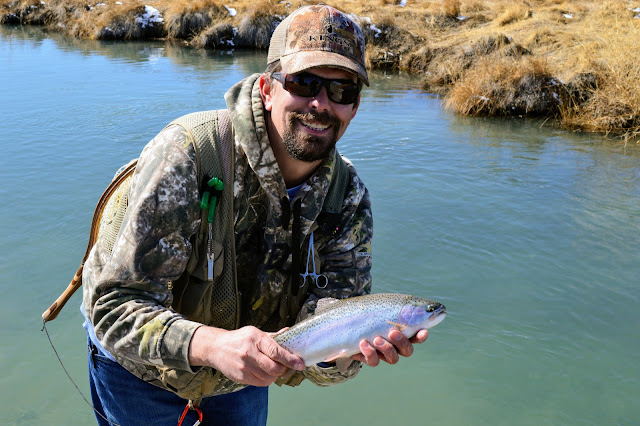 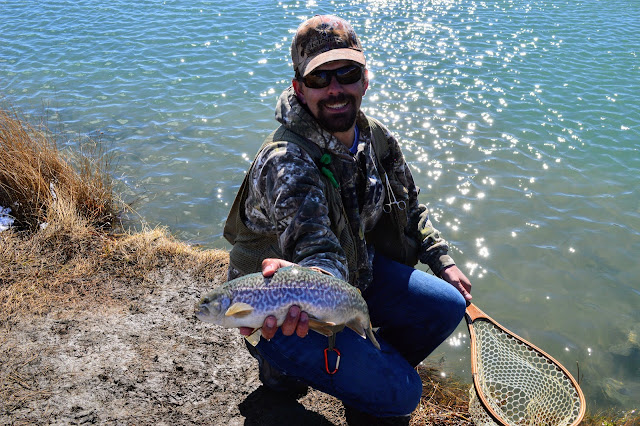 Del would run down from the truck to help net and take pictures of any fish that she noticed I had on, then remind me that we still had to get the kids before we could drive home. She wasn't nagging me, just reminding, but how could I leave when fishing was so good? One more cast kept turning up more fish until I hooked one that seemed to be connected to a freight train. It dogged me for a minute, then shot out into the deeper water where it put some serious distance between us. I was thinking that I had beat my personal best again when I noticed that the fish had me into my backing! 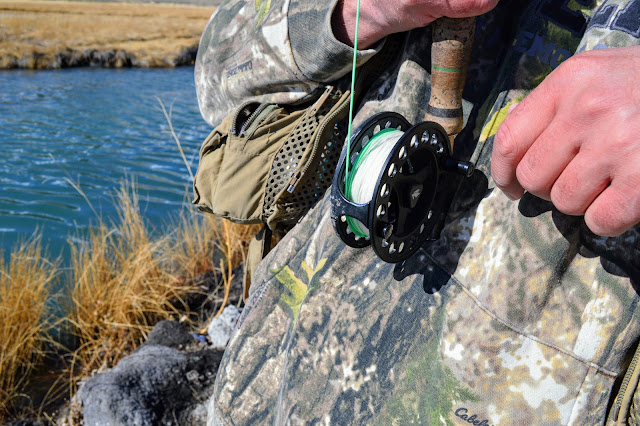 First time I've ever had a fish get me into the backing! It took a minute, but I slowly worked the fish back in and coaxed it to the net that Del was holding. Not the biggest fish of the day, but definitely the hardest fighting fish and a perfect fish to end the day on. 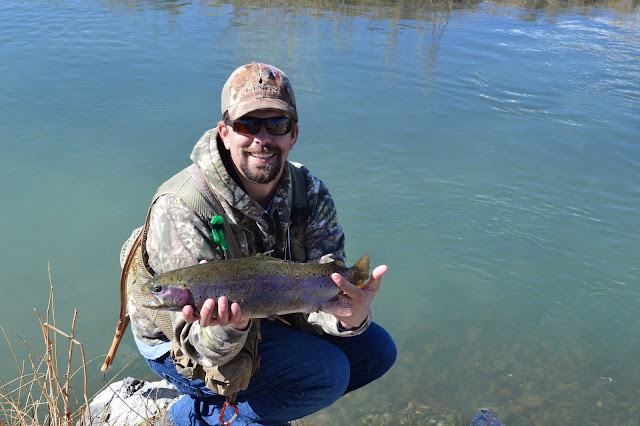 We cleaned up and started making the long ride back to Del's mom to deliver the fish, collect the kids and make our way home. On the way we spotted four different coyotes! One of them was running straight at four antelope and we stopped to watch it unfold. The speed goats got up and ran from the yote, then turned and ran at him. They seemed to be moving as one at times as they made their way further from us but not really further from each other. It was pretty amazing to watch! 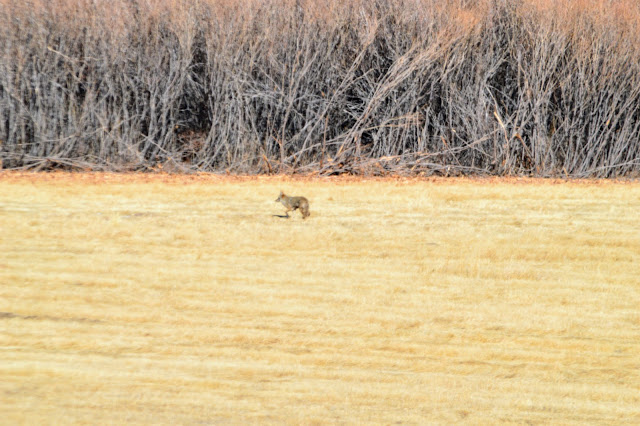 To cap off the day we spotted a ton of deer in the sagebrush fields, one group even had three different 3-point bucks in with the does. Won't be long before they start shedding their antlers, but for now it's really cool to see them. We had an amazing little road trip and it has me really excited for what we've got planned! 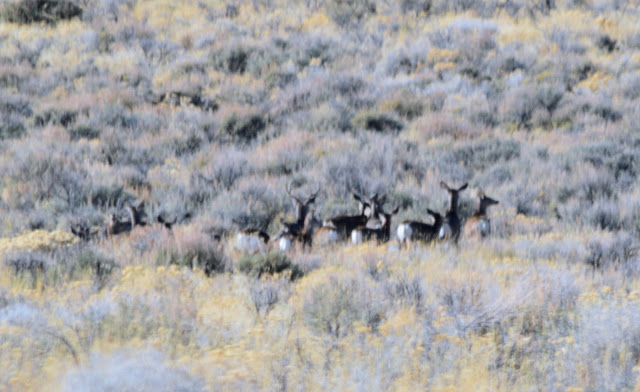 We weren't really thinking about going to the Western Hunting & Conservation Expo this weekend until my brother told me about a "screamin' deal" on a nice rifle. I wasn't sold since it was still a lot of money for a rifle I didn't need, but it did peak my interest and Del agreed to take the boys and go check it out with me. 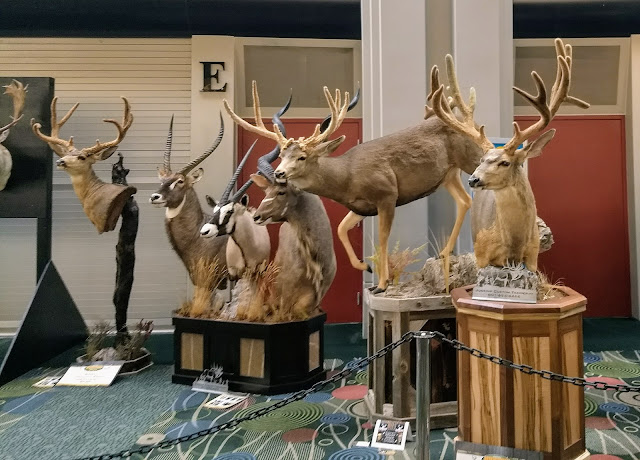 The most impressive thing hits you right when you walk in the door, and that's the taxidermy mounts. I know that the displays aren't something that you'd like to use as expectations for any hunt, but I can still dream. The boys liked some of the african mounts, like the giraffe, but I'm always a sucker for deer and elk mounts. As always, Atley took up his job as cameraman and started taking some pics. 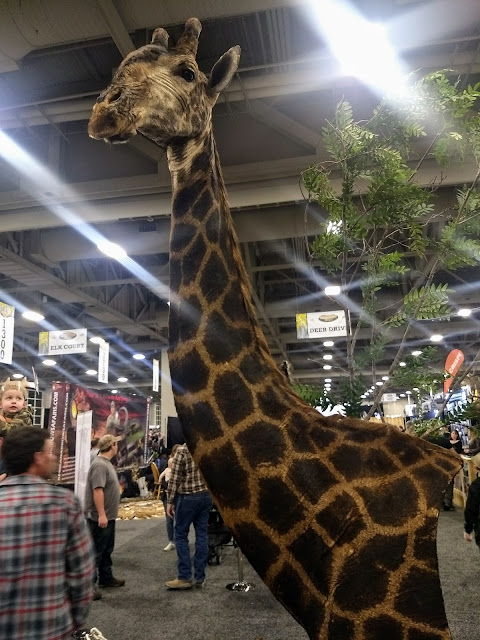 The rifle was really nice, but I just couldn't make such a selfish purchase when there are so many things around the house (and even stuff for hunting and fishing) that outweigh my wanting a new rifle. Some people would assume that it was the wife trying to talk me out of it, but she was fine with a new rifle purchase as long as she was able to get some goats. So maybe she did talk me out of it? 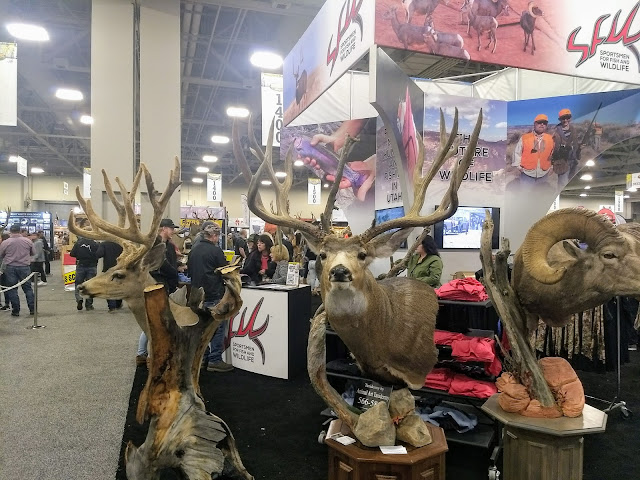 I did spend some money on a sweet new knife and we got Atley and me some new hunting pants. Del got some spices and enjoyed looking at new vehicles at the Toyota booth. How some of the outfitters can even break even at shows like this are beyond me. Several of their booths were devoid of people as we walked by. We had a good time though, and Caden even posed with sasquatch for us! 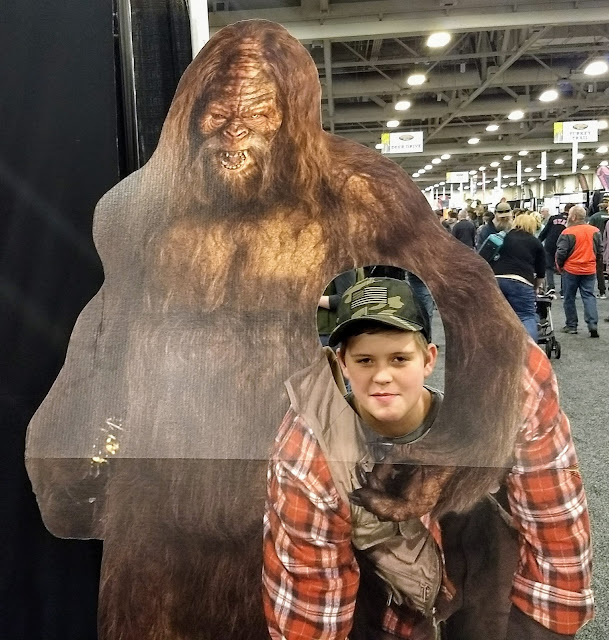 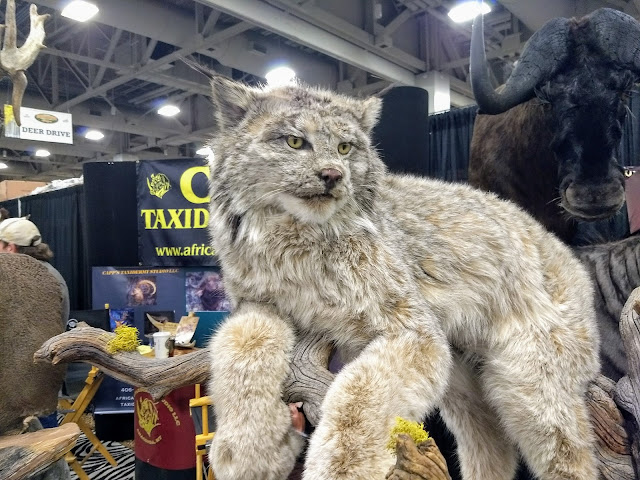 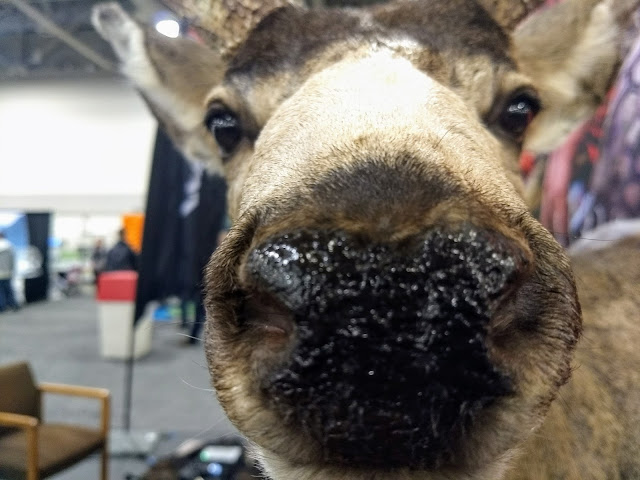 Posted by Tim Kidder at 6:49 PM No comments:

I went in to Sportsman's Warehouse for no other reason than to have a look-see and probably end up spending more than I should. Walking right back to the fly fishing section, I noticed an older gentleman there getting help from a store employee and overheard him ask a question about the fly line that he was holding. The employee stated, "I don't know" and walked off. I was so shocked that I may of stared a little bit. The older guy noticed and asked if I was a fly fisherman. I told him I was and helped him pick out a new fly line, backing and tapered leader. Wish I would've known a different store that I could've referred him to, but not being from the area I didn't know of any. After helping him, and listening to how he used to fish a lot while he lived in Wyoming, I picked out a couple things I needed and a couple things that were on sale. 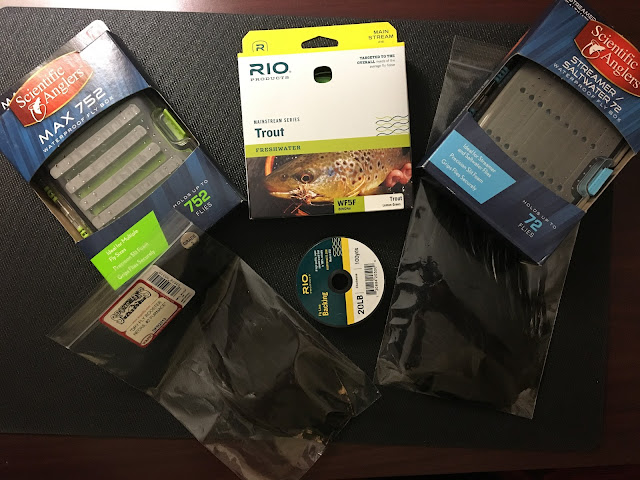 Every year I go to Southern Utah for the midwinter Utah Music Educator's Conference, and usually I take my fishing stuff so I can stop on the way back and fish for a few minutes. For some reason I've never had much success with this plan. Usually that's due to having to get back for some reason, or the streams not being in good shape, but none of that stood in my way this year. I stopped by a river that has given me some great times in the past, but one that I haven't fished much for the last couple of years. 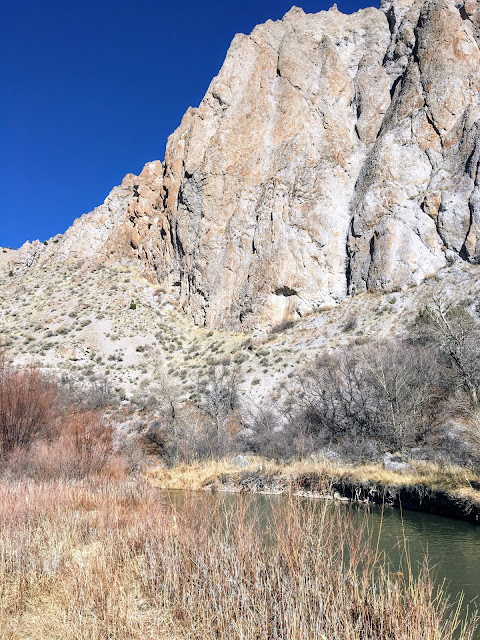 A couple of midges were coming off when I first arrived so I started with a nymph rig with a Zebra Midge. When that didn't provide any action, even after changing the length of my leader and adding weight, I tried about everything I had in my box. Only after putting on an egg pattern did I finally get a response from a confused looking little snub-nosed rainbow. 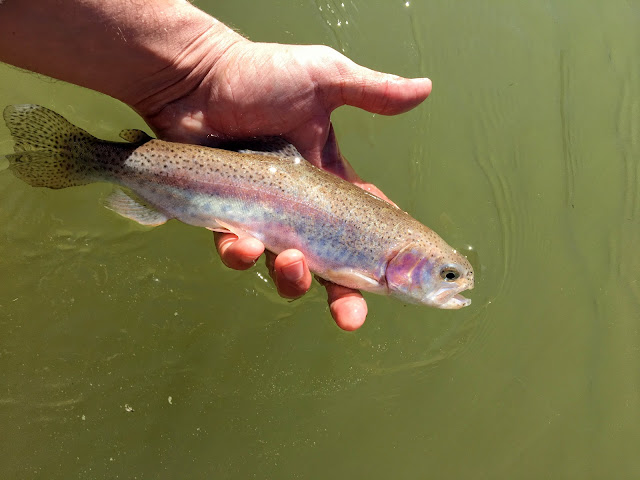 Working my way upstream was more difficult than usual because of the higher-than-normal flow. At one point this kept me from crossing the river and made me instead climb up and over some boulders that lined the bank. Well, I tried to climb up and over the boulders when my foot slipped out from under me and slammed my hand down on the boulder before falling backwards into the river. Not exactly the most graceful move I've ever made, and it messed up my hand a bit. Luckily, my rod & reel didn't suffer any damage and that made the icy cold water not seem quite as bad. Having my fill of high water, literally, I decided to check out another stream in the area to see if I could turn my luck around before heading home. 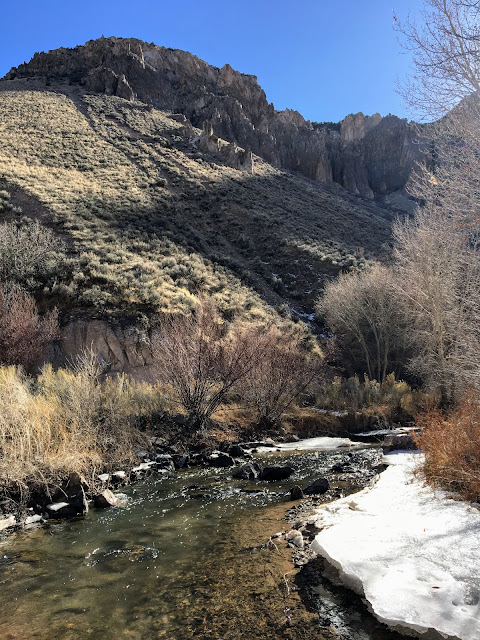 This stream is one that I need to spend some time at soon. But it's super low and cold right now which made for a pretty sight, but not the best fishing conditions. After a few pictures I headed for home with a plan to return in the near future.

Posted by Tim Kidder at 3:57 PM No comments:

Warm temperatures and dry weather make the work days crawl by. So one afternoon I made a break for it to the local stream to get my fly fishing fix. A few midges were coming off the water but without any fish making their presence known at the surface I put on a nymph rig to try and dredge up some action. The first fish came quick, but not to the Zebra Midge as I would've anticipated but instead to the Prince Nymph that I was mainly using for weight! 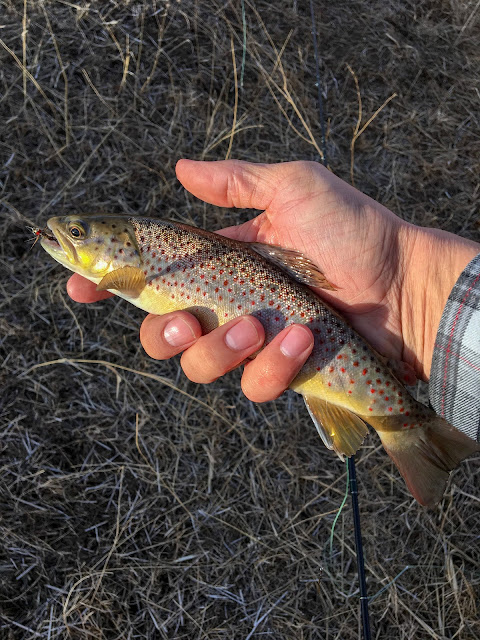 I kept with the rig just in case any other fish were looking to the midges but surprisingly the next couple of browns that came to play also wanted the bigger fly. Nothing that I could find in the water or under rocks could explain it but sometimes you've just got to give 'em what they want! 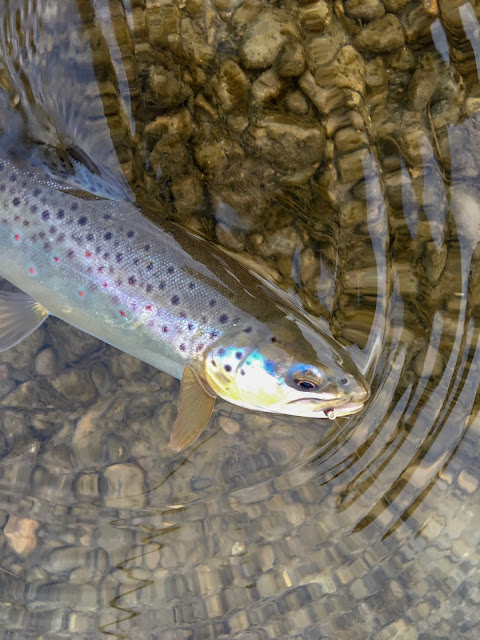 As I moved upstream I noticed that a landowner had removed one of the bigger beaver dams which could've made a productive hole upstream back to its former glory. I had to check it out and sure enough the river had almost returned to the way it had been. Complete with a small brown that was willing to take down a flash-back Hare's Ear. 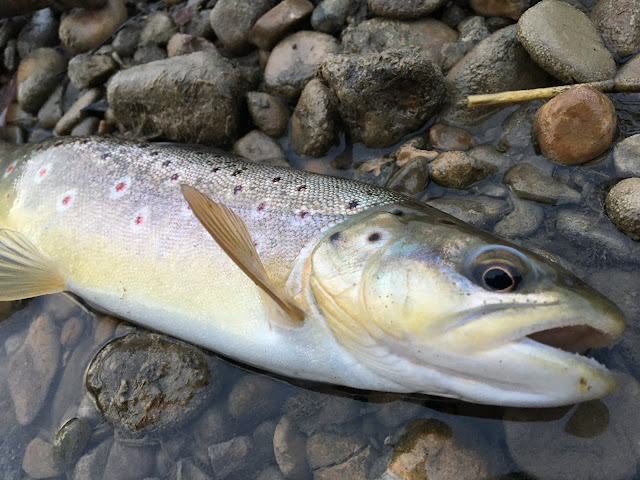 It sure feels good to be able to get my fix midweek and still be home for dinner! 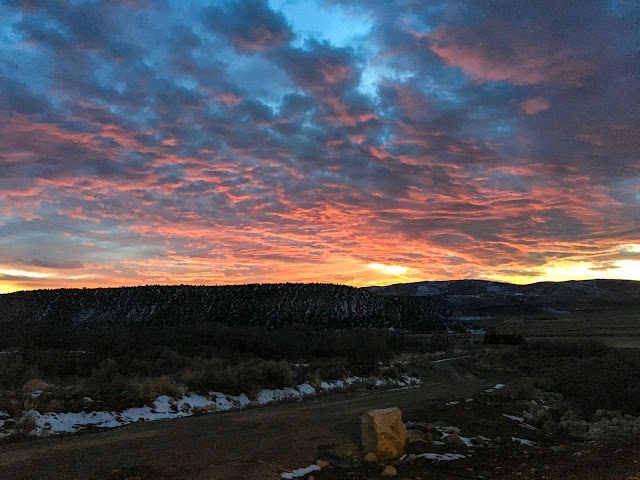 Posted by Tim Kidder at 8:48 PM No comments: