After the first weekend of not even seeing an elk, my expectations were low for our trip, even though we had five days to get after them. My hopes were raised when we showed up in camp and my brother Weston had gotten a cow elk that morning.  So we headed out for the evening hunt, but after a few minutes of driving around I was ready to get out and take a walk, Dad and Weston promised to pick me up at dark and I was on my way.

Only a few minutes after leaving the truck I heard a bull bugle! Not only that but another bull responded a little further off in the other direction. I hurried to try and get between them as it seemed like they were getting fired up at each other. My suspicions were confirmed when bull number one high-tailed it to the clearing that was right in between the two elk, and that's right where I was waiting for them. Both bulls had several cows with them, but more importantly, there was a spike! Seeing a spike on the spike hunt is like seeing a unicorn and now I had one within range. One quick shot and the spike hit the ground. The rest of the large herd ran up on the hill just across from me.

Of course, right when I was getting comfortable with the idea that my one shot took out the elk he got back up and started trying to get back with the herd. I had to make a follow-up shot that put the elk on the far side of the large meadow before he finally tipped over. I then got straight to work quartering him up (without even getting a pic first) and getting it ready to pack out. Just before dark I made the hike out to get Weston and a pack frame. Luckily, Weston had received my text and was ready to hike back in and get the elk right away. One trip between two people is a lot of weight on each of our backs, but we made it. 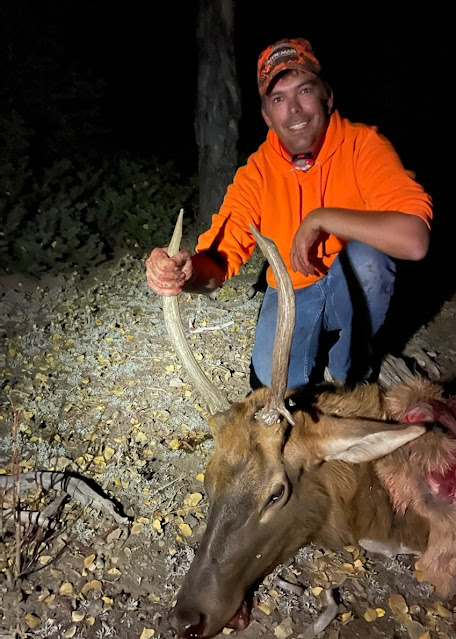 I'm super excited to have elk meat back in our freezer to feed my family and antlers up on my wall to remind me of the story.
Hope you're as lucky,
Kidder

Posted by Tim Kidder at 3:22 PM No comments: