First fly trip of the year

I couldn't believe I hadn't gone fly fishing yet this year!  So I decided that despite all the stuff I'm supposed to get done, I needed to go fishing.  So I left bright and early to hit the Middle Provo.  I figured it was a good way to end last year, might as well start this one the same way.  I even fished the same section, just above Deer Creek.  I quickly rigged up with what worked the last time I was here, a modified Hare's Ear with a pink Scud dropper, and I was off working my way up-stream.  First hole I was into fish on both flies, nothing really of any size early but at least I was catching fish!

Caught an obscene amount of fish today.  About every third cast it seemed like I had a hit, or a fish on.  Pink scud seemed like the go to fly, but I gave a few other flies too and had success on all of them: Gray Scud, Orange Scud, Gold Copper John, Modified Hares Ear, and a size 16 Adams that I was using as an indicator for a while (which kind-of shows you what kind of day it really was, everything worked and I was still willing to move on and try different things).

After catching almost nothing but rainbows all morning, I decided to try and get away from people a little bit and move down river and got into the Browns (although a lot of them seemed all silvered up).  There are some deeper holes down that way and that made me move my indicator around a little until I could find that sweet spot.  Luckily, with the indicators that I tie up changing depth was a cinch.
Today was also a great opportunity to try out some new gear that I've gotten lately.  This was my first time out without a Scientific Anglers fly line in about ten years.  The new line is a Hook & Hackle "Classic" hi-floater line in a weight forward 5.  I've got to say that for the money it's a pretty good line, though the difference between it and the Scientific Anglers Air Cell line is somewhat negligible.  It seems like the H&H line loads my rod better with less line out, but both lines seem to have a tendency to sink right at the tip.  That being said, I didn't dress this line at all before taking it out and that might make a big difference.  We'll see how it holds up over the course of the year.  Hopefully it doesn't crack as quickly as my last Air Cell seemed to.
The other bit of equipment that I was taking for a test drive was the net that my brother Jeff made for me.  I knew it looked killer, but now I know that it works really well too.  Just attached it to my vest with a couple of temporary carabiners till I install an eyelet.  Although, this system worked really well today and I didn't have to worry about the net catching on brush as I walked by because of how high up on my back the net rode (plus it was handle down).  So, I might not worry about changing this up for while.

All in all, I had a really good outing today and would've stayed longer if the wind wouldn't have kicked up around two o'clock.  I'm usually just fine fishing through the weather, and had already been rained and snowed on today, but this wind was unreal.  I stopped casting, I just held my rod up and let the wind take my line out!   It was clearly time to head home.
A great year is now officially underway.  Hopefully you can wet a line soon...
Posted by Tim Kidder at 9:19 PM No comments:

Been having a good year so far with a couple of good ice fishing trips, and I'm starting to work on building a couple of rod handles with burl cork.  Enjoy the pics. 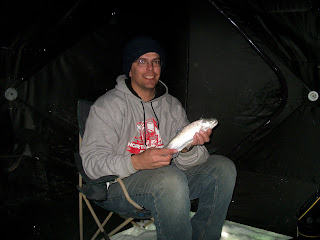 Lot's of fun, hope you're off to a good start too.

After taking most of the morning to recover from last night's party, we decided a quick family trip to Palisades to fish was in order.  This being the first ice fishing trip of the season meant that we had a lot of gear to round up, but still managed to pull up at the lake right about 3:00pm.  We hurried and set up just south of the boat ramp and quickly got into some fish.


Everyone had some action, and every jig seemed to work (although Genz Worms seemed to have a slight advantage).  Everything was going good until everyone suddenly got cold.  The temperatures were falling quickly, so of course it was time to go.  Quick trip, but a great way to start the year.  It's always better when you get to share the hardeck with your family.
Posted by Tim Kidder at 9:53 PM No comments: 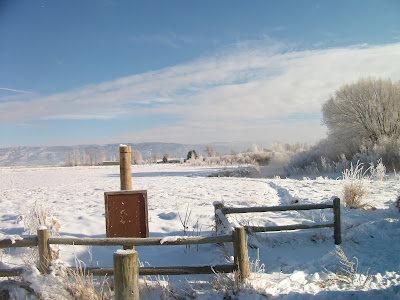 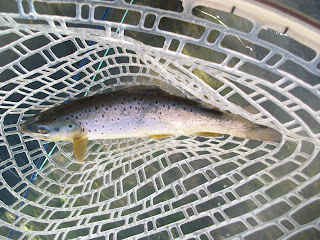 Did a solo trip to the middle section of the Provo River on New Years Eve.  Winter fly-fishing isn't for everyone, and I totally get that (17* when I left home), but there's not much I'd rather be doing in the cold months of the year.  Left my house around seven and was met with some light snow falling but I pressed on.  The weather was actually pretty nice everywhere else, it was just close to home that was unsettled.
My will was good, and I arrived at my destination with no un-planned stops (passed by so much good fishing...) and quickly rigged up my two fly-rods.  On my 8 1/2 foot I put a dry fly set up with a midge dry followed by an emerging pattern (funny, I was actually given this pattern years ago on this river and helped out by a very generous angler).  On my 8 footer I rigged up for a nymph rig, with a size 12 modified hare's ear followed by a size 20 pheasant tail. 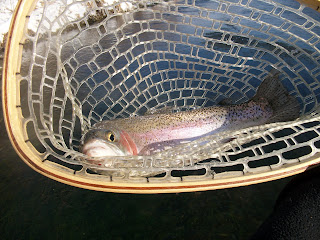 Fishing started out as winter fishing often does for me, a little slow.  But when I changed out the pheasant tail for an olive scud I began picking up fish.  About every sixth cast or so I had to get the ice from my guides, yet a few fish were still hitting my indicator (just a tease, the rise never really came off and so my dry rod saw very little action).  The day was going good with some average fish to show for the effort, I felt like it was a success.  Then I changed over to a pink scud pattern and fishing picked up drastically!  I had begun fishing back to the car (had to be back home for a New Years party with the family) so I was actually re-fishing some spots and still had great success. 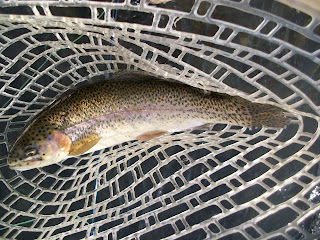 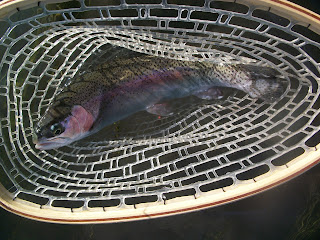 When I finally got back down in front of the parking area (water that I had walked past first thing) it was obvious I should have started with that fly!  Caught several more with a group of spectators watching ("Hurry and get set up, that guy just caught another one!").  Good day, and a good end of the year.  Hopefully it's a sign of things to come.... 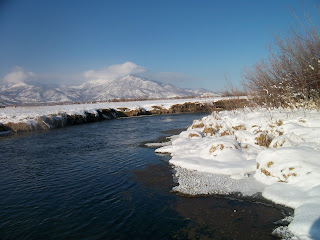 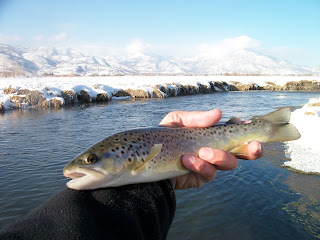 Posted by Tim Kidder at 9:27 PM No comments: