Anyone that knows me is aware of my fondness for inside jokes. So when we finally were able to buy a boat earlier this year, of course, we'd name it something that wouldn't be funny to anyone but our little family. Caden ultimately came up with the name, but I think we're all in agreement that it's the greatest. Our boat is "The Sea-Liquor". Really excited about the possibilities, and hoping that it will be easier to get my boys to go with me.

Didn't get too early of a start, mostly because Deli stayed up late trying to get a paper done so she could go. Hitched up and headed out, stopping at the local gas station to fill up. Once the truck and boat were gassed up, the truck didn't want to stay started. It seems like if a vehicle is going to have issues, it will always show up when you're about to take a drive for fun. We headed back home to trade out vehicles and were soon on our way, only a little later than we were hoping for.

I haven't been fishing in a boat for quite a while, so there was a little trepidation about launching and getting it started. Not big things, but a lot of little things that I could easily screw up. Everything went better than expected and after we picked Deli up (someone has to drive the truck and trailer off the ramp) we were out on the open water!

It felt good to finally be able to try the boat and having it perform flawlessly put a lot of my fears to rest. I decided to try out the trolling motor and get fishing while Deli and the kids were more concerned about getting lunch. It didn't take long before we needed to get the top up and re-apply the sunscreen on a warm and sunny afternoon.

We had several hits before I finally connected with a nice 18" rainbow to get the skunk off. We kept having more hits than hook-ups, but I managed another decent bow before the wind kicked up. We were mixing it up switching between trolling and drifting while casting our lures. Atley tried a fly and bubble with no luck, but when Caden borrowed his rod he quickly tied into a couple of feisty little bows. 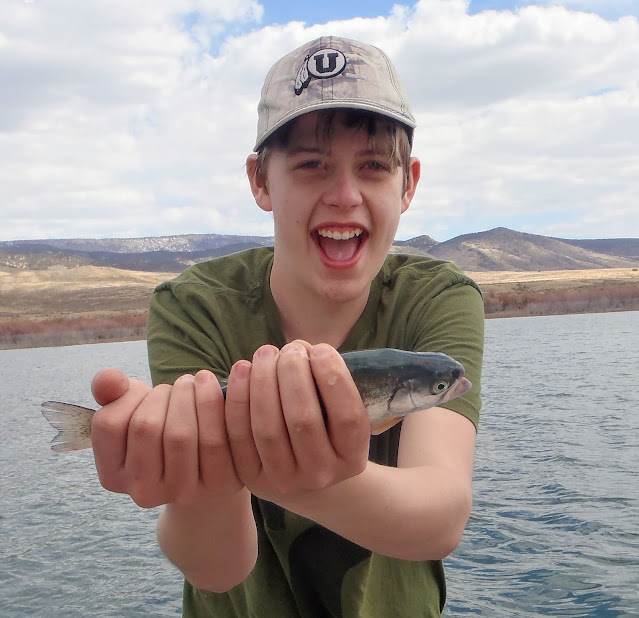 Not to be outdone, Atley finished out our day with a little bow of his own caught on a lure. A little joyride around the lake to teach everyone how to drive the boat and we called it a day. They dropped me off to go get the truck and trailer and Atley drove the boat onto the trailer like a pro. We're making a list of things we'd like to have with us next time as well as some upgrades to dream about, but overall I think the maiden voyage of the Sea-Liquor was a raging success. 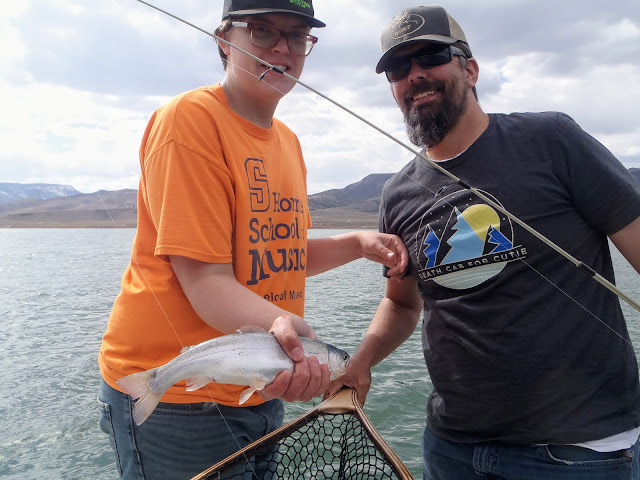 I love it when my boys go fishing with me! Unfortunately, I think I pushed them too hard when they were still too young and now my boys don't like to go with me. Either that, or I always want to go too far and stay too long...

Atley refused to go with my Dad and brothers on a long trip but promised that he would take me fishing sometime soon. That time came over Spring Break when we had a morning to get out and do a little fishing. We didn't have too much time, so we just brought one rod and decided to take turns. This is the first time in quite a while that Atley has gone fly fishing with me and it took a minute for him to remember how to cast, manage the line, set the hook, and the million other things that you're supposed to do on each cast. It wasn't too long before he made a good cast and set the hook on a tiny little fish that flew out of the water. We moved up to the next hole and it didn't take too long before Atley was into another fish, this one big enough to not take flight. 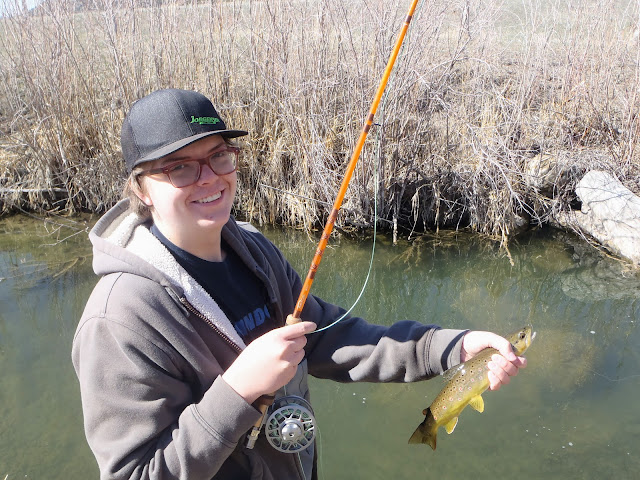 The water was low and clearer than usual, but the fish were decently cooperative and willing to eat a Prince Nymph that was presented well. We traded off fish as we worked upstream, and it wasn't until we'd already made the call to order lunch that we found a pod of rising fish. I caught my best fish of the day on a Griffiths Gnat. Not sure if this is the first dry-fly catch of the year, but I'm sure it won't be the last! I plan on using my small fiberglass rod and throw dries every chance I get this year, hopefully my boys will take me again. 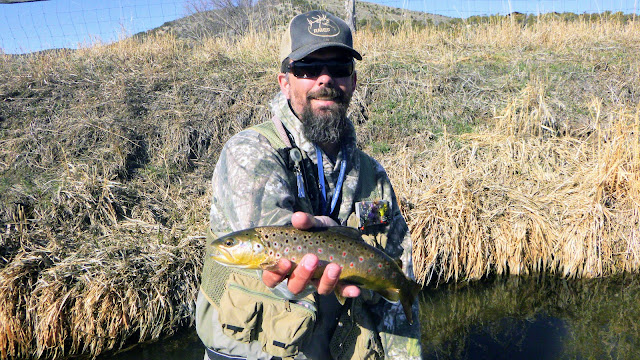 Posted by Tim Kidder at 6:10 PM No comments: 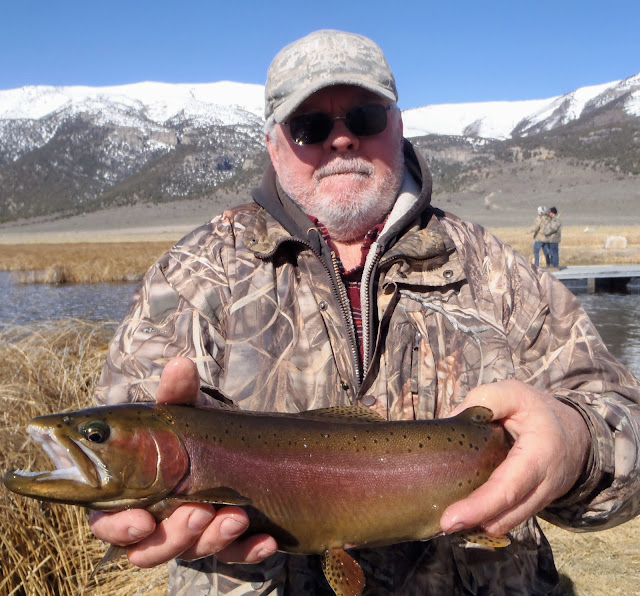 January to June feels like it lasts forever, but this year it seems somehow longer. I've been getting out and doing some fishing but it hasn't been enough to recharge the batteries. Spring break has been a promising break on the horizon, and the feeling of, "If I can just make it until then" has been keeping me going. Weston seemed to be feeling about the same, and he even asked me to tie him some flies in preparation for the break. He even agreed to pay me for them! Of course, life has other plans and when Spring Break had finally arrived, there was an electrician and schedule to juggle. 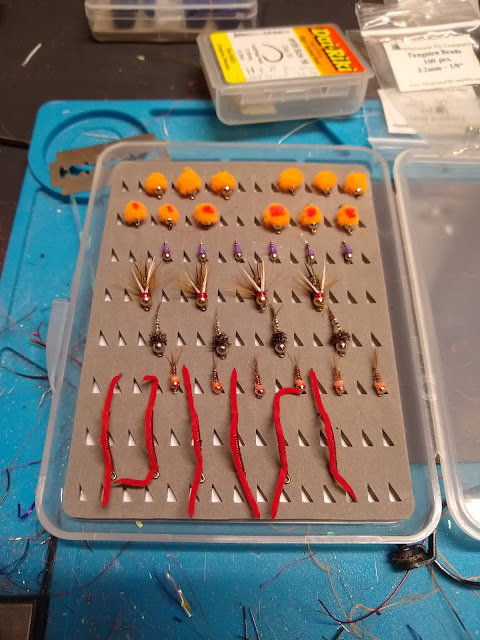 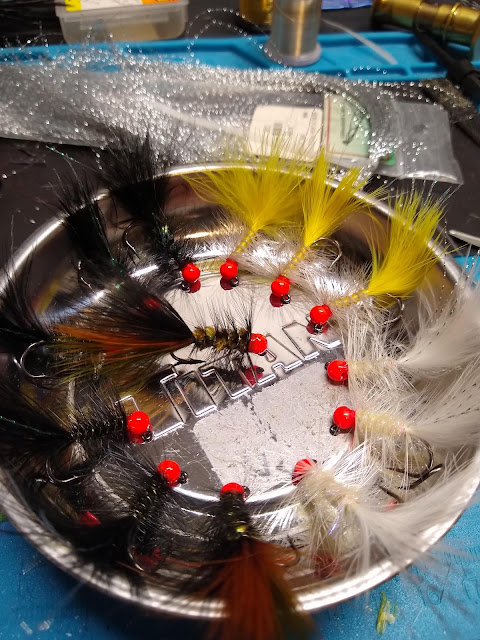 We figured out the schedule so that I could still get out and do something during the week. My Dad, Jeff, and Weston were pretty anxious to get some fishing in and we were hoping to do a trip together. I'm sure they were frustrated when they found out that they would have to wait an extra couple of days for me. Jeff took a quick trip with his kids to pass the time and one of them accidentally shut his fly rod in the truck door. It happens, but the timing wasn't ideal. He came up the night before we were supposed to leave to see if I could fix it, but the repair was going to take some time. I set him up with an old rod of mine and shared some of the flies that I had been tying. He gave me an awesome new net!

An early morning drive to meet up with Weston and Dad and we were on our way. The plan was to fish all day, stay the night, and get a little more fishing in the next morning before heading home. As the sun came up we arrived at one of my favorite spots to fish. We started out tossing streamers and didn't find too much action, but the fish we did get to fall for our weighted Wooly Buggers were some great fish. The fish of the trip came to Weston on a white bugger. 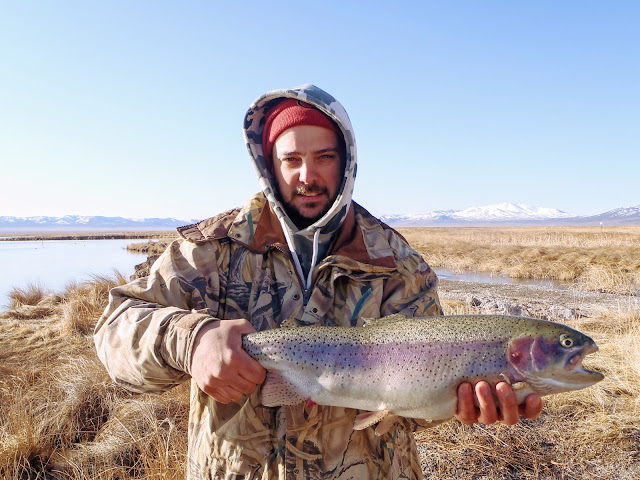 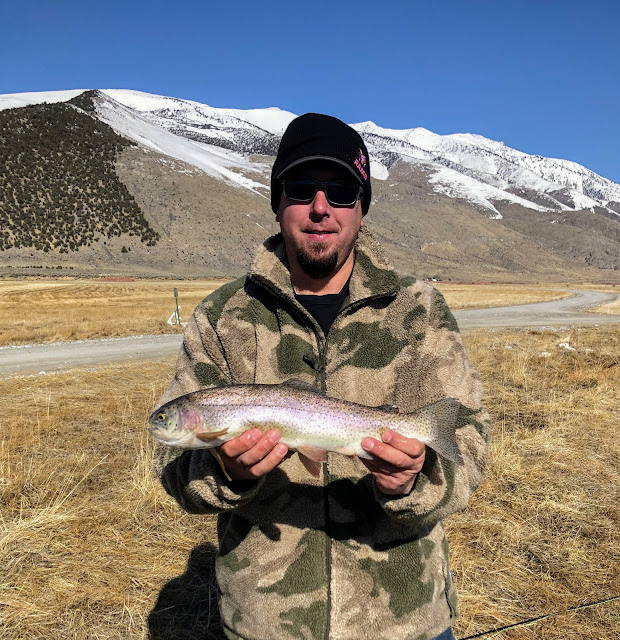 Dad seems to get an idea in his head and just won't let it go, no matter how the fishing was going at our first spot he wasn't going to be happy until we went to his favorite spot. So even when I caught a really gnarly looking male, Dad was still going on about moving to his spot. 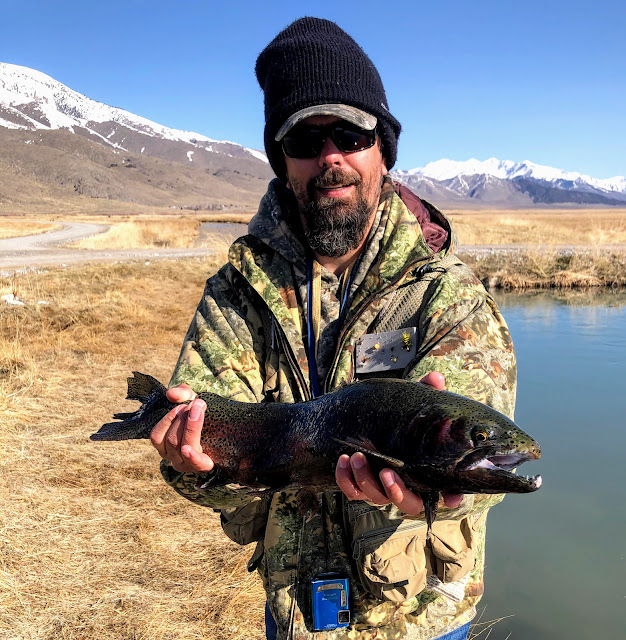 Dad's spot doesn't have much variety to it. There are only a couple of places to cast from and it's still water, which means that if you fish under an indicator it's really boring. When the fishing is on (like it was for our last trip) it's great, but when it's a little slow it's like watching paint dry. He loves it though, so we had to go. Fishing was pretty slow, but we'd change flies/colors and hook into a couple quick and think things were going to turn around. But that would be it. No more fish, or strikes, or anything until we made the next change and it would happen again. Weston even brought out the spinning rod to see if that could change our luck but it was pretty much the same story with that. When everyone else was ready to call it and move somewhere else I put on a dry/dropper rig to throw a Purple Haze and a Zebra Midge at some risers. I caught two and had two more on before the wind kicked up to levels that made it hard to cast where the fish were. That was enough to get us to move on and try another spot. 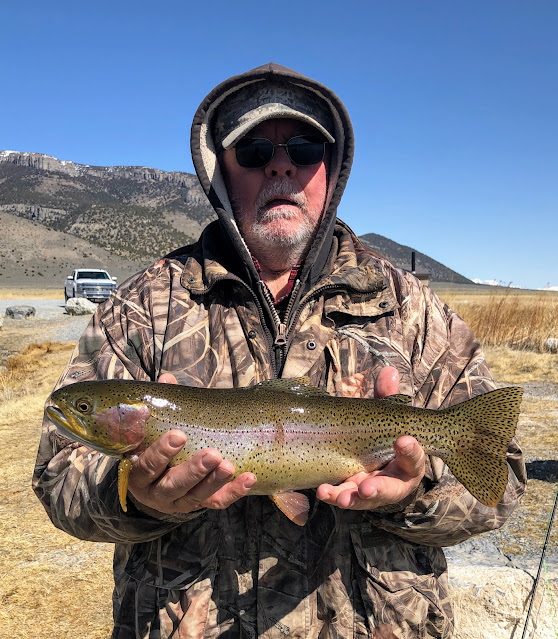 The next spot started out with Weston catching a couple on the spinning rod with a bugger. I started getting some on a San Juan Worm and a Pink Scud, but the wind was too much and we decided to do a little exploring that didn't yield any results. So we ended up right back to where we started and it was just how we'd left it. Fishing was slow, but there were fish to be had if you were patient. Jeff caught his best fish of the trip and I even caught a bass before we decided to call it for the day. 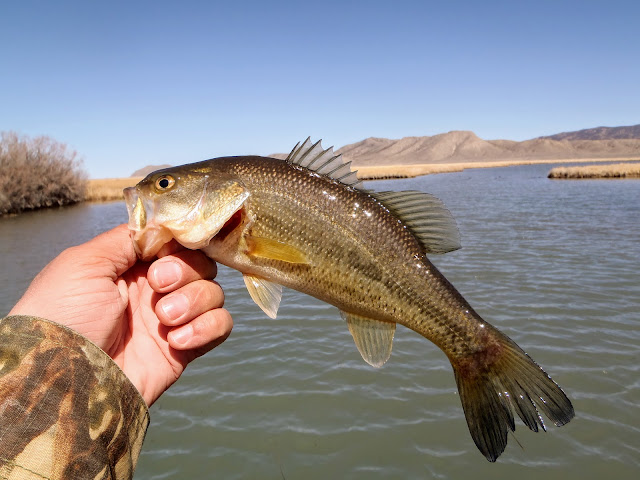 On the way home, we talked about how this could be the last time we go out there for a while and debated whether or not to stay to do a little more fishing the next morning. I think we all knew that we wouldn't be staying, but none of us wanted to be the one to say it. We just started driving home without saying that the trip was over.

Posted by Tim Kidder at 1:32 PM No comments: