Tomorrow's Fish
and The View From My Vise
by R.E. Long 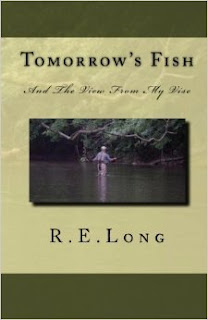 Just because I've been spending most of my fall hunting and working (not necessarily in that order) doesn't mean that I'm not still thinking and reading about fishing. Luckily I found this R.E. Long book to keep my head in the game. I really liked the format of a short story then a fly recipe of the fly featured in the story. It made for some good reading and a nice application story to the patterns. The patterns are as varied as the locations for the stories. R.E. fishes from coast to coast for trout of all varieties, accidental salmon, and some bluegills. His stories make me want to go to these places and try my hand at fishing them and provided a great escape from my day-to-day.

Buy Tomorrow's Fish at Amazon.com
Check out Ralph's Fly Box
Posted by Tim Kidder at 10:14 AM No comments:

The muzzleloader deer hunt is a weird one in Utah because it doesn't have the traditional Saturday morning opener, but instead starts on a Wednesday. That means that in the all the years that I've been going on this hunt I'm yet to actually be able to get out on the opener. But the muzzleloader is still my favorite of all the deer hunts. The leaves are changing, the weather is cool and (usually) dry, and the elk are starting to get really vocal. One of the reasons that I usually can't get out is just part of my job, I have to direct the pep band at football games and it seems like every year there's a game. This year was no different and I was really tired from all of the homecoming activities so I didn't even get up on the mountain until mid afternoon on Saturday. No big deal, on the ride up the hill we spotted some elk and after dropping our stuff off at camp Atley and I went after them. I still had my control cow elk permit and was hoping to fill it with the smoke stick. We could only get about 300 yards from the small herd, but it was pretty cool to see a decent bull and a spike along with some cows. A great way to start the hunt!


After dinner I took Atley out for a longer than anticipated hike where we saw some does and heard some elk but that was about it. Walking back to camp under the super moon was pretty cool (how often do you have a clear shadow at night?) but the hard work made Atley too tired for the next morning hunt so he elected to go with his aunt and uncle where he wouldn't have to hike so much. So my Dad and I set out just before light into an area that we knew the elk had been hanging throughout the archery hunt (full details here) by way of an old road that has been closed for years.

Not long after first light we spotted our first elk of the morning, a spike and a 5 point bull about 50 yards ahead of us, but no cows. The bull walked off pretty quickly but the spike was pretty curious about my cow call and hung around looking at us for about 15 minutes. We waited him out so that he didn't spook any other elk that might be around, once he lost interest and wandered off we continued down our path as quietly as we could. Up ahead it sounded like a whole herd of elk were crashing through the trees so we hurried forward to try and get a look at what was making all that noise. Turns out, it wasn't a whole herd of elk. It was one huge six point bull that was ramming into a tree. Just about the craziest thing I've ever seen. This bull would slam into the tree two or three times, stop, look around, then scream to any challengers and return to take frustrations out on the tree. We couldn't believe it and watched this awesome bull continue with his tree hating for a half an hour. It never knew we were there and only wandered off once it had successfully knocked the tree down!

I know the video isn't very impressive, but it at least has a good scream at the end.

It was an amazing morning to be out in nature and seeing all these bulls was beyond cool, but I had a cow tag and was starting to think our morning couldn't last too much longer when another elk stepped out into the road in front of us. Another bull! A five point bull with no worries in the world came out into the opening about 80 yards in front of us then walked straight away from us up the road. Thinking we were probably running out of time, we decided to drop into an opening to see if we could find the herd. Walking along in the aspens was pretty loud, but we spotted a cow about 200 yards away down the steep hill. Too far to shoot with the muzzleloader, but we sat down and gave her a call to see if we could get her to come any closer. She quickly darted into the trees and I thought it was all over, but a second later she came back into the opening and was looking for us. I gave her another call and she trotted up the hill to within 30 yards and I shot her in the neck. About as quick of a death as anyone can hope for and it saved us a good deal of effort by keeping her up near the top of the canyon and closer to our vehicle. Didn't take long for us to quarter it up and pack it back to the truck.


What a great weekend to be out in nature with my family enjoying everything the great outdoors has to offer. With all this hunting showing up on my blog I'm thinking a name change might be in order, but I'm not sure what that would do to the domain. Kidder Outdoors seems to have a ring to it that would encompass all of what this blog is about. Just an idea. Hope you can get out, be safe, and enjoy nature.

I know some people will be offended by story and pictures but I'm not about to apologize. This was a perfectly legal hunt the proceeds of which pay to keep our wildlife populations abundant and healthy, and the meat from this elk will help to feed my family for months to come. If that offends you, don't read my blog. Trust me, I won't be offended.
Posted by Tim Kidder at 9:00 PM No comments: