I'm not sure what it is, but it seems like we all go through phases where we get super obsessed with one thing and that's all we want to do. Right now, Jeff's got the predator hunting bug again so I decided to take a day and go with him. Last time we went we took our boys and despite all the extra movement & noise we still called in a coyote. Unfortunately, I was trying to film the hunt and Jeff didn't see it. So this time we tried to improve our odds by only having adults and not trying to film the hunt. 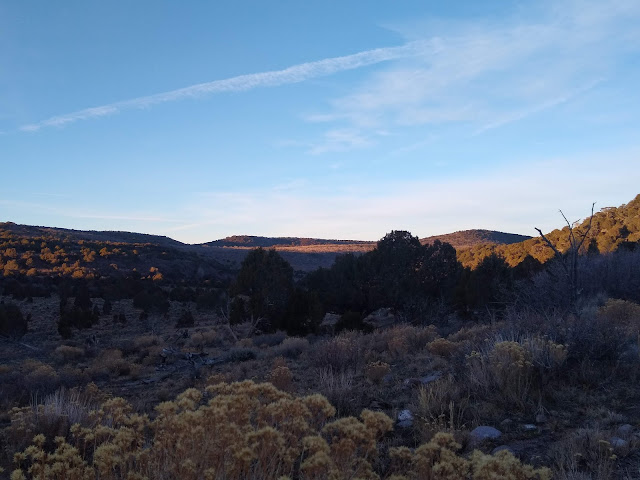 Coyote hunting to this point has always been an exercise in futility. We go out, make a few setups, and then spend the rest of the day driving around. This time would be different because we were going to keep making 'stands' all day (or at least until we called it quits). The first two set-ups seemed very familiar, with what we thought would be great when we first sat down, but they were pathetically bad by the time we decided to move and stood back up. Kinda crazy how the landscape can change like that. We did see a nice mule deer buck chasing does around and a small herd of elk, so that was pretty cool.

The third stand seemed pretty promising as we walked into position. We decided to sit a little ways apart from each other to cover all the angles. My mind was just started to wander when suddenly there was a coyote running right towards us. My initial thought was to hurry and get a shot off before Jeff could, but my better senses kicked in and I waited. If a shot presented itself I would take it, but if Jeff got a shot first that would be great too. It's crazy how greed can rear its ugly head in moments like this. I continued watching the dog covering ground on its approach until it just disappeared. I don't mean like it ran off, but it was there one moment and gone the next. I stayed focused trying to look with a wide lens for few seconds (that felt a lot longer) and just as suddenly as it had disappeared the dog reappeared slightly to my right and really close. Just when I was hoping that it would stop it did, and I took the shot at 49 yards. My Ruger 243 doesn't have that much knockdown power, so when the dog disappeared I thought I had missed it. I quickly re-loaded and waited a few moments for a chance at a follow-up shot. When the coyote didn't reappear I stood up to get a better look at the situation. I may have gotten a little excited when I saw the coyote laying almost exactly where it was when I pulled the trigger. My second ever coyote! 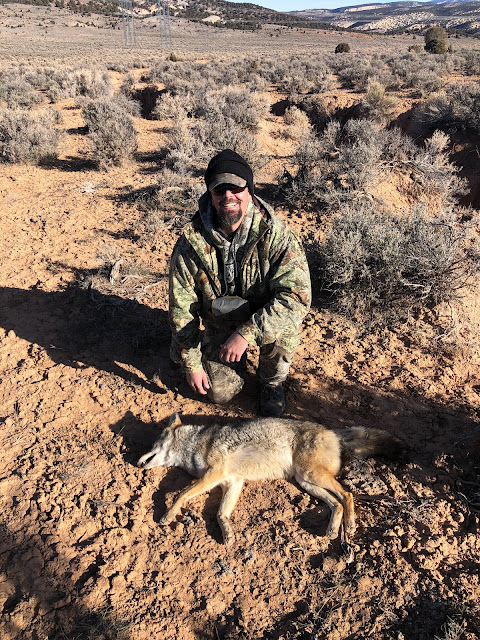 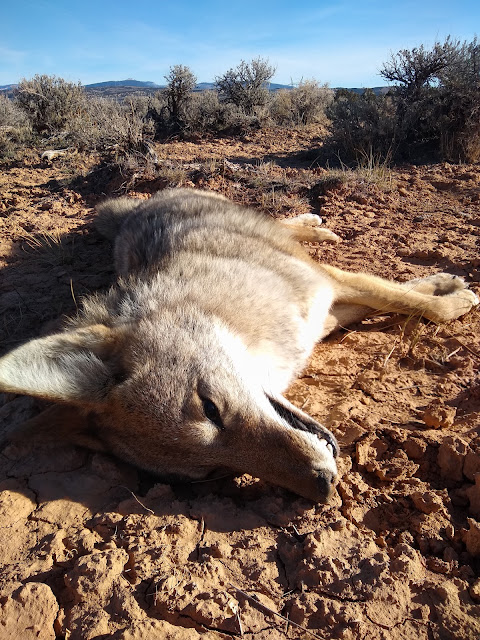 Jeff was just as excited as I was about the success and this made it easy to stick with it a little longer and we quickly moved to another spot to make another stand. Even though the next stand looked very similar to others that we've made over the years, coming straight off a success makes having confidence easy and we were sure that we'd be seeing another coyote soon enough. Too bad we were wrong! The next few stands produced no action other than seeing a few bucks chasing does around and a huge group of turkeys. 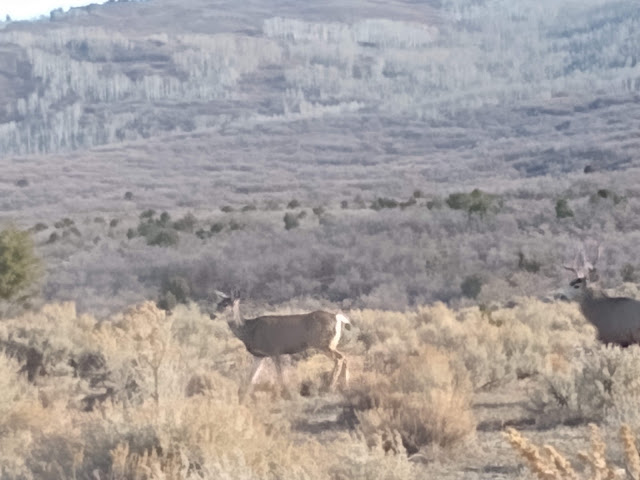 The day was getting late as we made our way back to my truck, but I couldn't help but feel pretty happy with a successful trip. It probably won't be too long before we try it again.

Posted by Tim Kidder at 3:47 PM No comments:

Google photos started showing 'memories' like Facebook, and the morning of our trip I had a memory pop up that one year prior, to the day, is when Lane and I hit the same water that we were supposed to fish. It's pretty weird when you're that consistent without even trying! As I worked with the Summer Marching Band program I watched the clouds gather over the area where we were supposed to be heading. Ross claimed that he was too busy to go, but I wonder if those clouds had anything to do with it...

Once I was done working, I made the call to Lane to see what he was thinking and to make sure he wasn't going to bail. As I expected, Lane was still ready to go so we headed out to a small stream where we hoped to find some fish that were willing to rise. Or at very least hit a dropper so we could pretend to be fishing dry flies. We arrived at the empty trail head and decided to hike a little ways from the parking lot, hoping to find some less-educated fish. Started out slow for action on top, but we did manage a few on weighted nymph droppers. 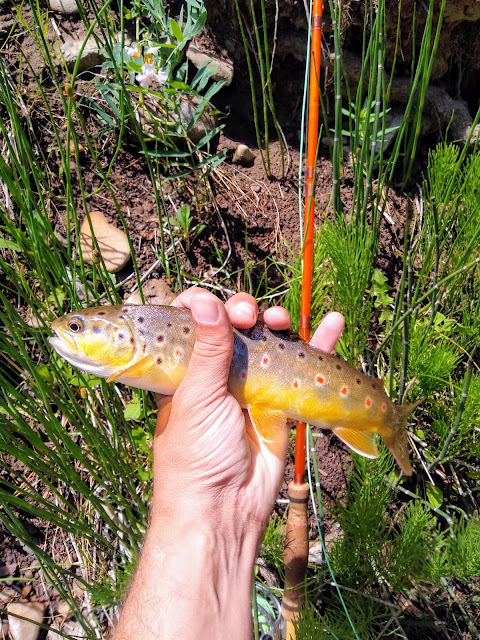 We kept working our way up until we came upon a pool where fish were starting to rise. A couple fell for my purple haze before the rain (and hail) starting falling. The storm ended almost as quickly as it began but a couple minutes after it had stopped the stream changed colors and not for the better. 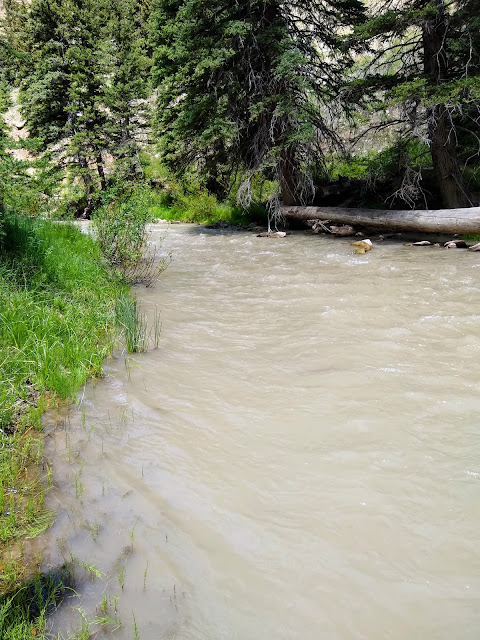 A few other fishermen hiked past us as the fishing turned off and we started talking about bailing on this stream and heading somewhere else. It was about this time that we hooked into a couple more fish. 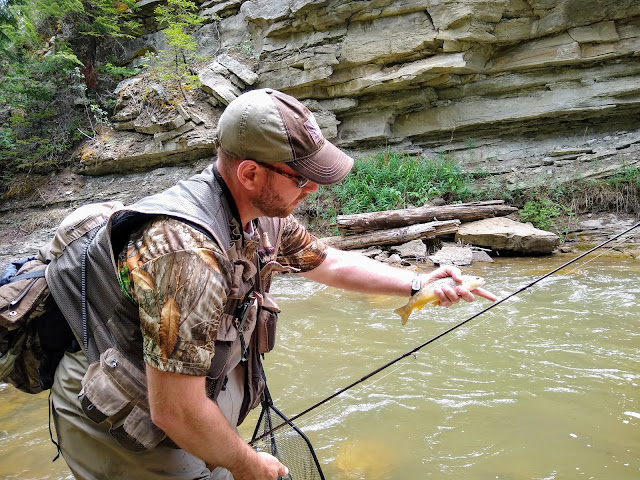 Then the water cleared just as fast as it had clouded up and we started catching fish on top again. Just like that. 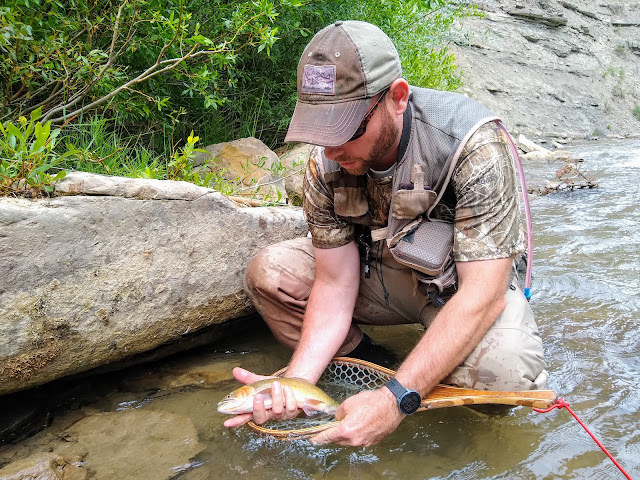 Evening was coming on and thoughts of making the hike back to the truck were intruding on our fishing when I tried swinging a prince nymph (okay, it might've been on accident) and instantly improved the catch rate. It kept working as I caught up to Lane. We switched over to caddis dry flies and started taking turns swinging them to splashy rising fish. Just before the light completely left the water we caught one of the emerging bugs that were making the fish go crazy, it wasn't a caddis but a green drake! 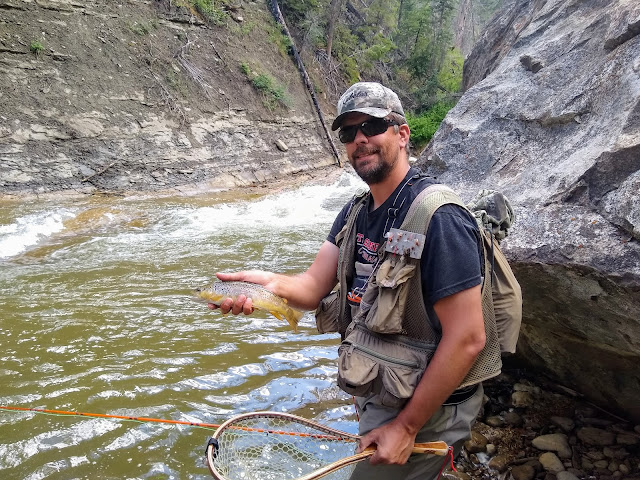 Luckily, I had a head lamp in my vest that made the hike out much easier. Thoughts of getting back to this stream as quickly as possible to try and hit the hatch again was all we talked about on the hike out and the ride home. Unfortunately, we couldn't line up our schedules for another day of fishing for quite awhile. Oh well, maybe we'll hit it again next year...

Posted by Kidder Outdoors at 7:30 AM No comments:

I'm always willing to get out and do some fishing, but I'm even more excited when someone else is willing to go with me.  With the success I experienced on the dry fly last week (read about that trip HERE) I couldn't help but let Lane know where the fish were looking up. Lane is always the first to switch to a dry fly at the slightest indication that the fish might be willing. We exchanged a few texts and soon enough a plan to get on the water together took shape. We decided to head to the same place as I've been fishing lately with hopes of finding more rising fish. 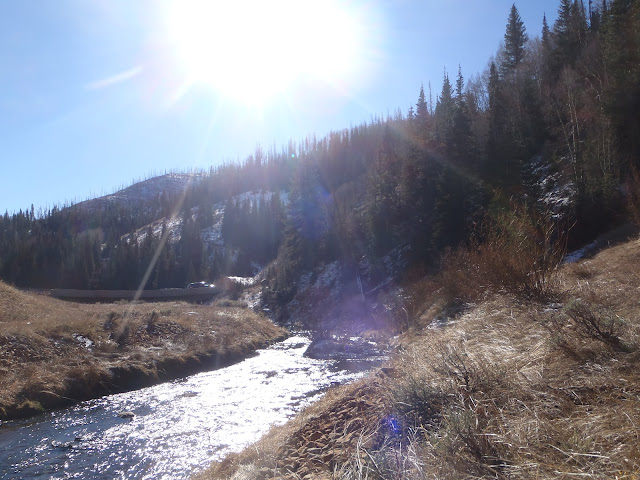 We arrived on the water bright and early and initially, it didn't feel too cold, so I didn't put on my coat and gloves figuring that it was only going to get warmer as the day went on. We made our way downstream, biting off a good chunk of the stream that would take a good portion of the day to fish. Right away we started sight-fishing to nymphing fish, and we had some hits but couldn't seem to close the deal. Before we could make much headway with the fish the wind started coming down the canyon making it really cold and almost unbearable to fish. It was so cold that Lane's fly line snapped! As he tried to figure out a way to make it work I realized that I really needed my coat and gloves that were sitting, uselessly, in the truck. I suggested we make the walk back to the truck to get Lane a spare reel to fish with (but really it was because I couldn't feel my hands!)

I worked on getting warm in the cab of the truck while Lane got set up with my spare reel. Once we were both ready to get after it again I put on every spare piece of clothing I had and we started fishing. After casting to some fish we spotted without any takers, a few fish rising upstream from us got our attention and we started chasing rings without any luck. About when we were thinking about picking up and heading for different waters we got over a pod of active fish in the bottom of a deep hole and I finally got a fish to the net. 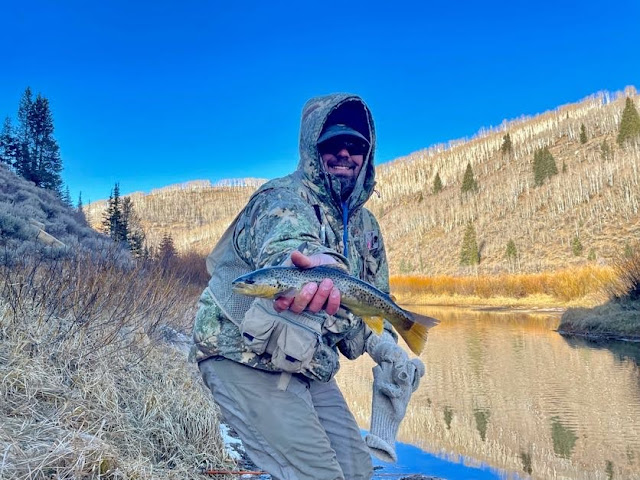 With an idea of what the fish might be interested in, it didn't take long for Lane to get his first to the net too. 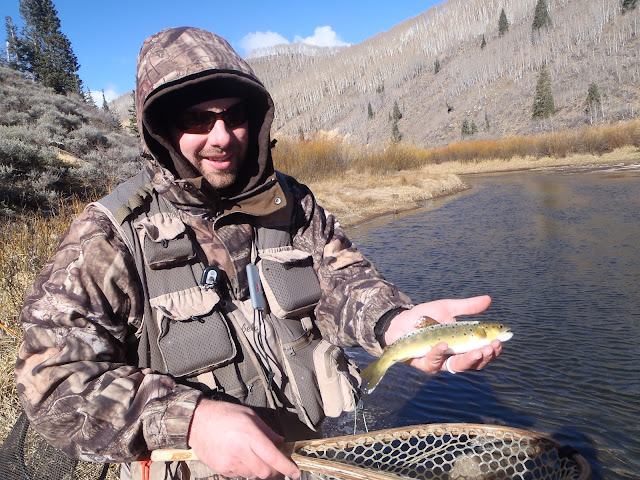 Things were going good trading off whenever one of us managed to get a fish in on a tiny midge pupa, or when our heads got too cold. I'm not sure how many fish we brought to hand, but it was just enough to hold our attention and keep us from moving on. That's when the unthinkable happened: My rod broke. Not sure that I did anything wrong this time, I just went to cast and as I was just starting out of my backcast I heard a snap and knew it was over. This has been the best rod I've ever owned. The blank was from Hook & Hackle and has just been phenomenal. Oh well, it was good while it lasted. I walked back to the truck to get my spare rod, a sweet little fiberglass rod. It took a few minutes to get used to the different rod, but once I did I was back in the game. 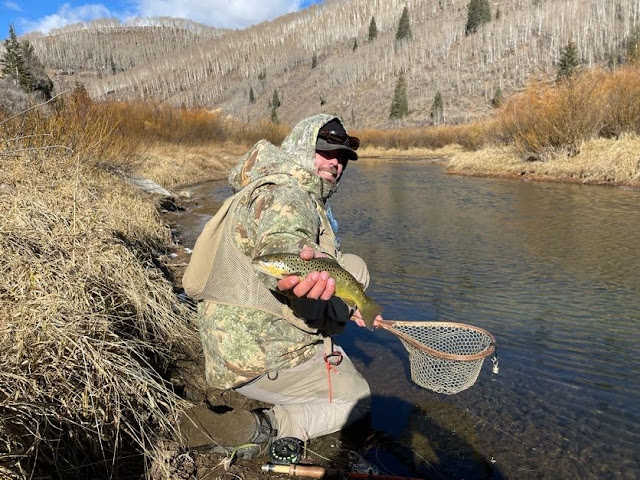 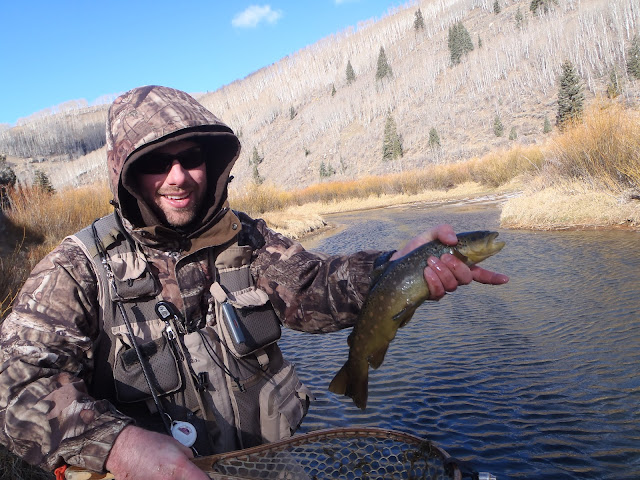 Towards the end of the day we spotted some rising fish in the hole above where we were fishing and I told lane to have at them. While he was chasing risers (and coming in brief contact with a couple) I continued fishing my nymph rig and managed to get one more to the net. 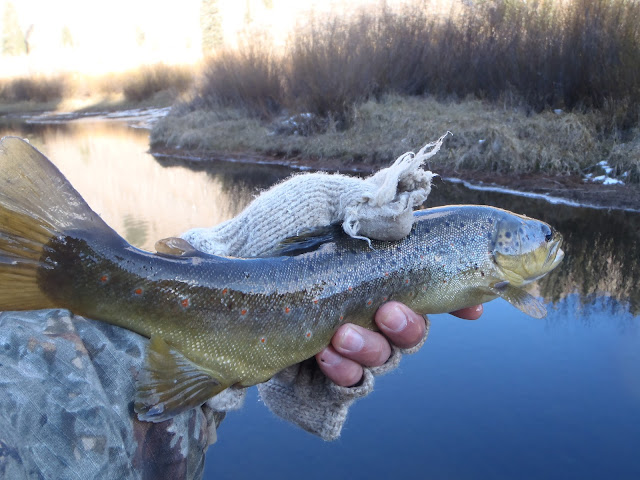 When Lane came back with tales of almost making it happen on the dry fly the temperature was dropping rapidly. So we fished our way back to the truck and lane managed to finish out the day with a great fish. 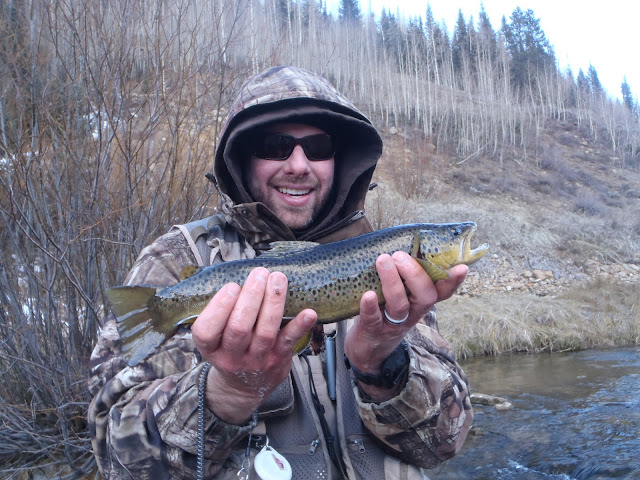 Even though it was a rough day in some ways, it was a really good day in other ways and one that I needed in a lot of ways. I'll try to repair the rod, or just build a new one and get back after it as soon as I can.

Posted by Tim Kidder at 8:20 AM No comments: