There is a list of places that I'd like to fish this year that is much longer than the days (or funds) available. So, despite the great day I had on my last outing, I wasn't too hep on trying to do it again and instead wanted to hit another spot on the list. The area I decided on is a longer drive than most, so I figured it would have to be an overnight trip. Luckily, Caden decided that he wanted to come! I love it when my boys take me fishing! We loaded up and hit the road. The boys always get to choose the music when we go on an outing together so we listened to the "Halo" video game soundtrack all the way there. 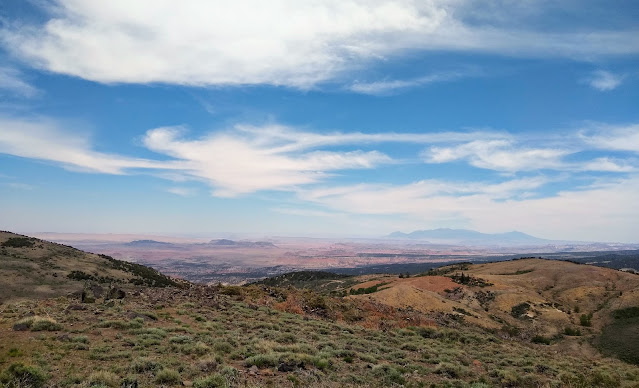 A few years ago I registered myself and the boys for the Utah Cutthroat Slam thinking it would be a great excuse to get out and explore some different waters. Things being what they were, we never really got serious about chasing down the four species of cutthroat trout. Feeling like this would be a good year to change that, I made it a goal for this trip to check one sub-species off the list, the Colorado Cutthroat.

After a long ride on roads that were a lot rougher than I remember, we arrived at our destination. The first stop was a small lake that I know holds some really nice fish. Nothing like swinging for the fences! The water was more off-color than I've ever seen it, but I still had high hopes as we rigged up. Unfortunately, no fish were interested in our offerings other than a couple of small fish that would chase our flies but not eat them. We did see three small snakes as we worked our way around the shoreline which was pretty cool.

We decided to move to another lake before it got too late in hopes of finding more willing fish. This lake requires a little hike to get to that years ago was almost too much for young Caden (you can read about his first trip to this area HERE). Now it wasn't a big deal at all for the young man he's become. Things started off good, with a few fish spotted and one chubby little tiger to hand. Then the wind started to blow, the temperature dropped, and it started getting dark. 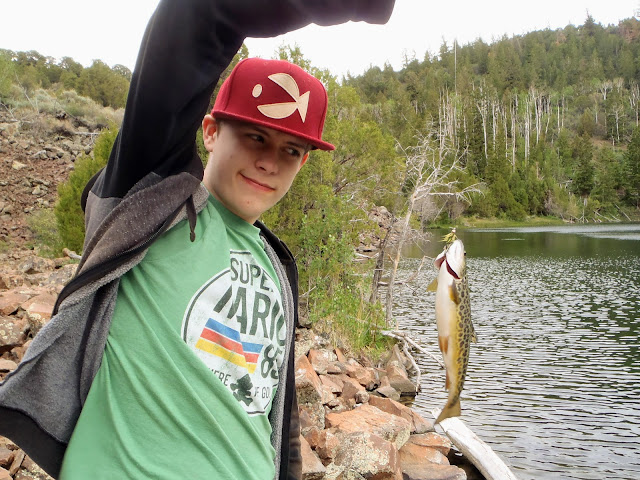 We decided to try for a hail mary to one last pond in hopes of catching a fish that we could eat for dinner. When we arrived, there were a few dead fish floating along the shore. Not sure what happened, but this could be a regular occurrence this year with ridiculously bad drought conditions. We tried it anyway, fully expecting that we wouldn't catch anything but you gotta try, right? Back to the truck for the dinner that Caden was really looking forward to, Ramen Noodles. The temperature continued to drop, so we decided to sleep in the truck where we had a heater if we needed it.

We slept pretty well for a night crammed into the cab of a truck and woke up to frost on the windshield and a Pepsi breakfast. We decided to start our day at a lake that I haven't fished much, and have never caught one at. Right away we spotted fish and I even caught one, a beautiful little cutthroat. We tried a bunch of different flies trying to figure out what the fish would be interested in as we worked our way around the shoreline. We found a better spot to stand with more backcast space before we started getting regular strikes from fish on a Damsel Nymph. 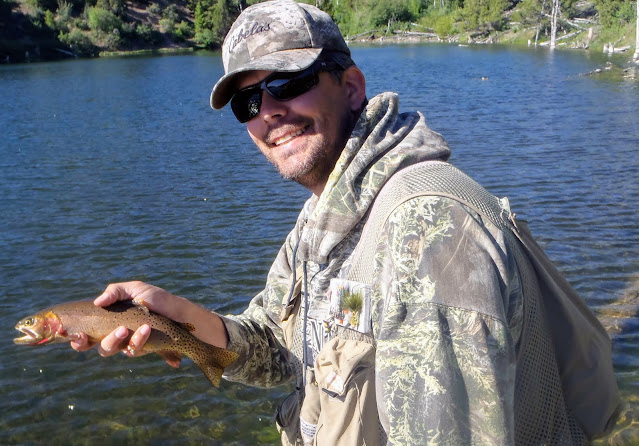 Of course, the goal was for Caden to get into some fish, but more specifically a cutthroat for the slam. So he catches a splake to start his day followed by several rainbows. Right when I started calling him the 'Rainbow Kid' he finally catches a couple of nice cutts. 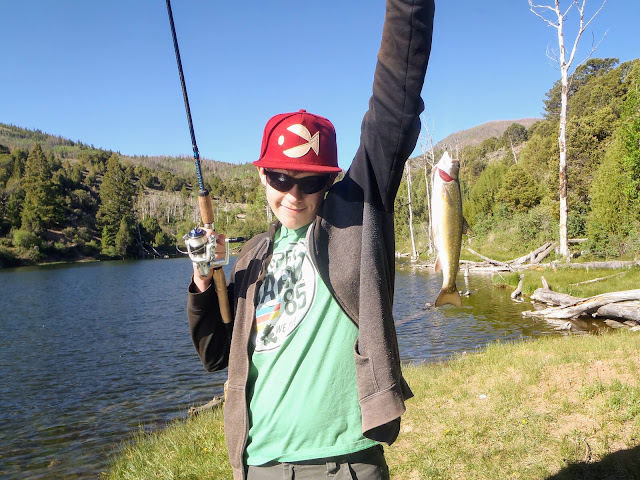 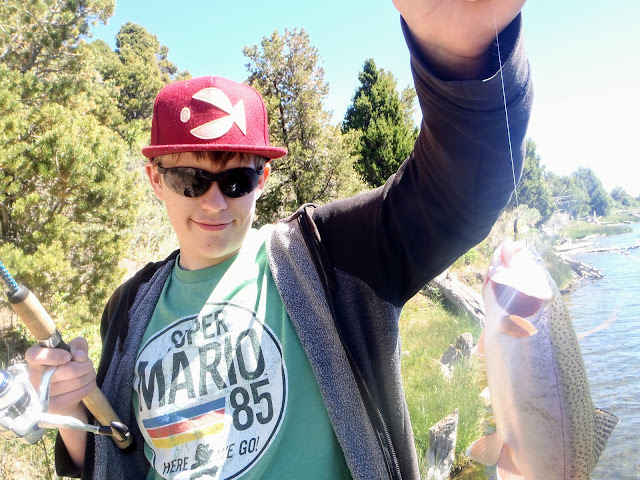 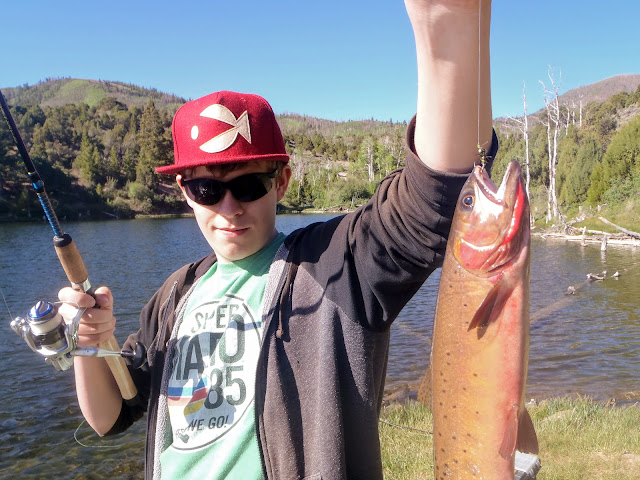 I'm not sure if I ever figured out what the fish were really keying in on, but they would take a damsel nymph stripped slowly or suspended under a dry fly. I need to tie some damsel nymphs! The last few fish we caught became our lunch. 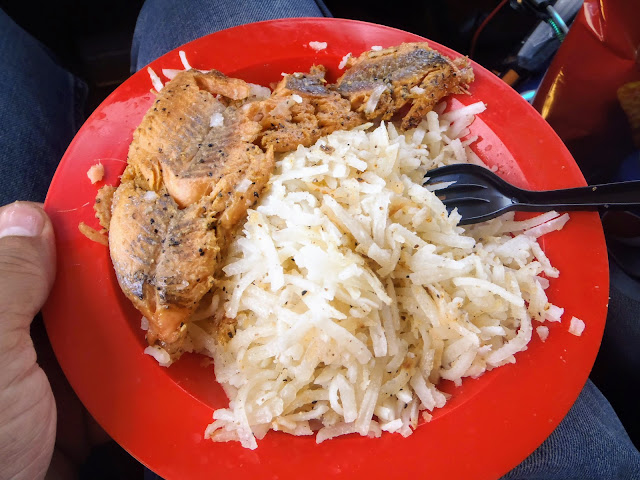 After lunch we tried pond #1 again with similar results but fewer snakes. I wanted to catch more fish, but I also wanted to try different lakes so we decided to start making our way back home with plans to stop at some different spots along the way. Stop number one had smaller fish, but they were really interested in what we were serving up. It was fun to watch Caden catching fish (he's getting really good with the spinning rod) and he ended up catching quite a few cutts. He even got a couple with the flyrod! 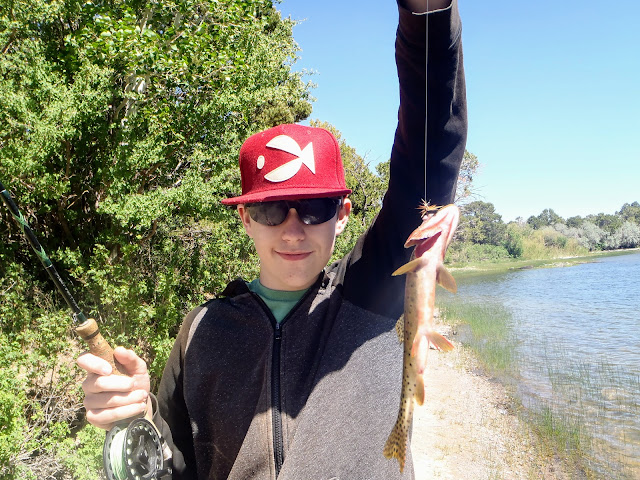 We spent more time than I was planning on at that spot, so we elected not to stop again to fish on the way home. One species of our Cutthroat Slam down, three to go! More importantly, a great trip with my boy and some memories made. 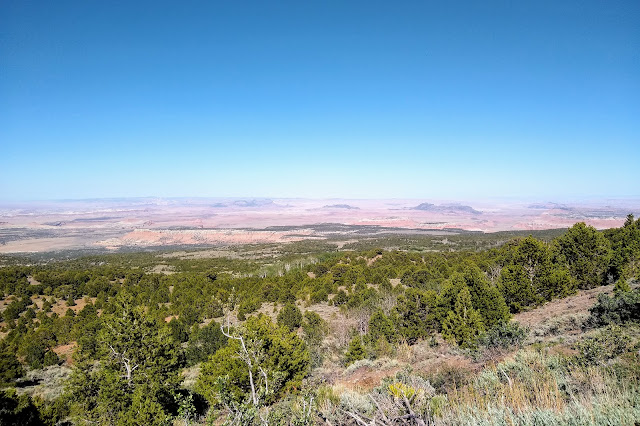