The first week of summer break! As a teacher, having time off is one of the advantages of my career. Nevermind the fact that it's basically leave without pay with our 9 month contract pay is stretched across the full year, it's time off! As a music teacher that runs a summer band program, my summer isn't completely devoid of work but I still have plenty of time to spend on the water. The first week off seems to always be about catching up on all the projects that I've been neglecting, so when Lane texted and asked if I wanted to get out I had to check with the wife to make sure she'd be okay with it. "You can go play with your friend as long as you get your chores done," was her reply. I honestly think she was surprised that I checked with her at all before committing.

The plan was to check on a stream that we know of in hopes of finding some pre-spawn cutthroat and maybe some rainbows that like to tag along in hopes of an easy meal. I figured we were still a little early, but we had back-up places to hit if the fishing wasn't what we hoped for. Lane was confident that we'd find fish because of the lack of run-off this year. Sure enough, we found low clear water and fish that were extra spooky because of it. A stealthy approach, some patience, and some tricky casting was all it took to get a chance at one of these fish. It was Lane that struck first with a beautiful cutthroat. 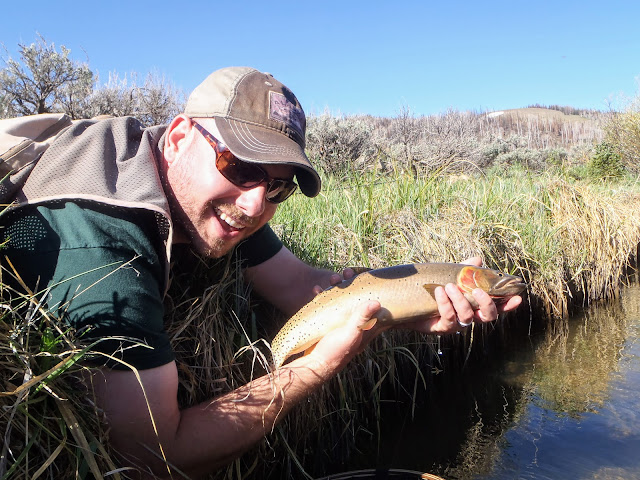 Fishing with Lane is always a good time because, whenever possible, it's spot-and-stalk fishing. It almost makes it feel more like hunting, where you spend the majority of your time just looking for a target and planning an approach. Luckily for us, there were plenty of targets and I soon had my first fish of the day. 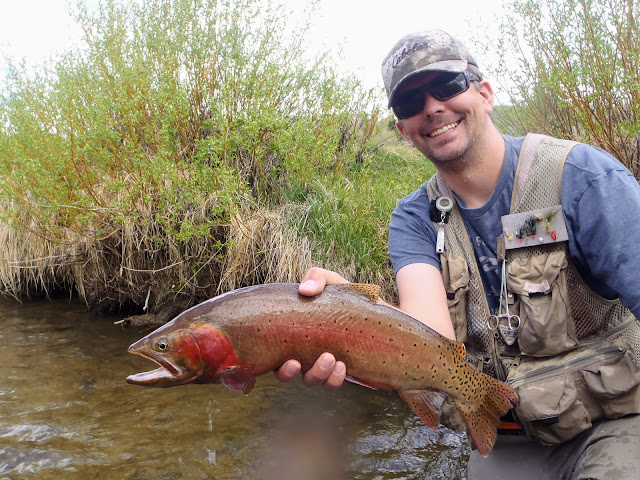 If the day were to end there it would still have been a good one, luckily for us the day had just started and there was still a lot of stream to stalk and a lot of fish to throw to. The sun was intense, which was good for spotting fish but one application of sunscreen was definitely not enough. The cold water definitely helped though, and we kept fishing even though our skin was turning red before our eyes. 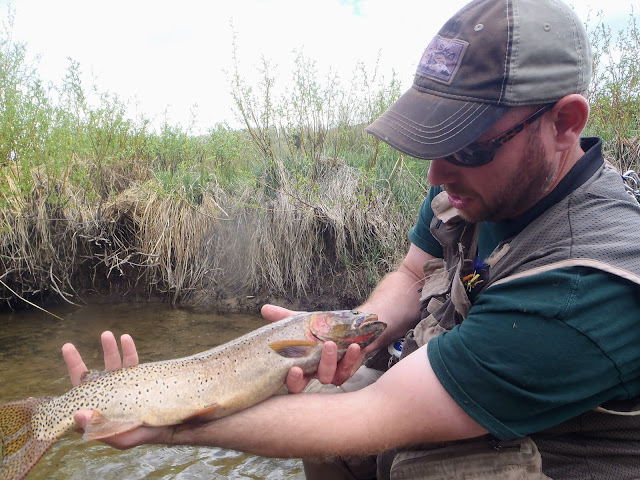 There are a lot of different ways to fish together, and each one has it's advantages. For this type of fishing we tend to trade off fish. Meaning, it was your turn until you hooked and played (or landed) a fish, or missed three takes. It's a good system that allows the person who's turn it is plenty of time to have a chance and it frees up the other guy to act as spotter and hopefully net man. I'm sure some people don't like fishing this way, but I do. When you're fishing partner is relying on you to spot fish and describe their movements it keeps you in the game and an active participant. When a fish is hooked I feel the rush of adrenaline as I move quickly into position to try and net the fish as quickly as possible. There is a lot of pressure not to screw up the net job and accidently cost your friend a fish too. So any fish caught seems like a team win and makes the whole day very enjoyable. 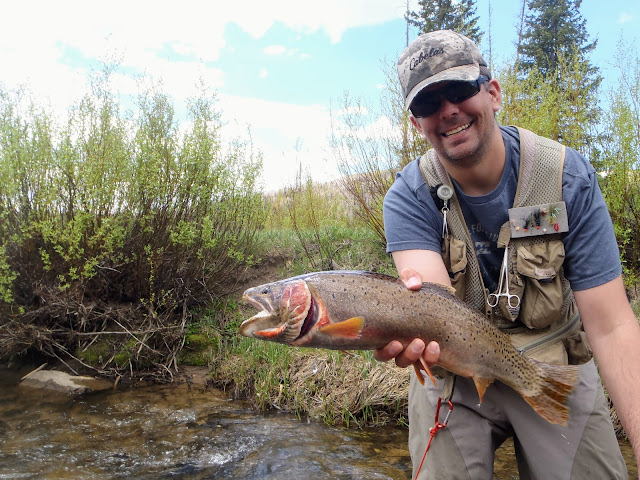 Never really found the fly that they would take consistently, but if you placed a good fly in front of their face enough times eventually they'd eat. That's where having a spotter was so important, to tell you where the fish were and what they were doing. These fish weren't taking the flies too aggressively, in relatively slow moving water, so detecting the strike was very challenging and there were several times when the spotter had to call the strike so the guy with the rod knew when to set the hook. Like I said above, definitely a team effort. 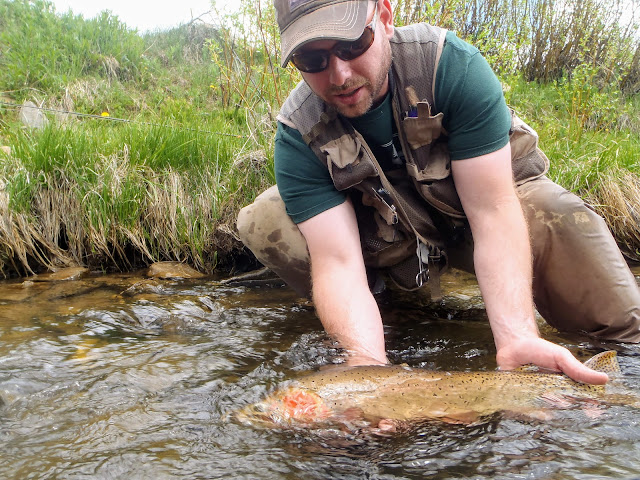 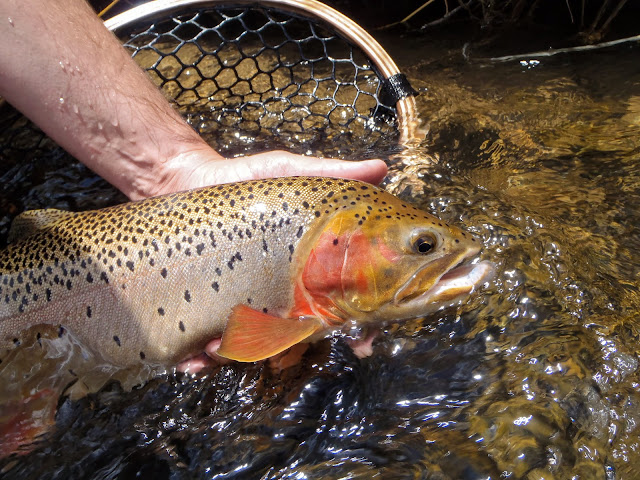 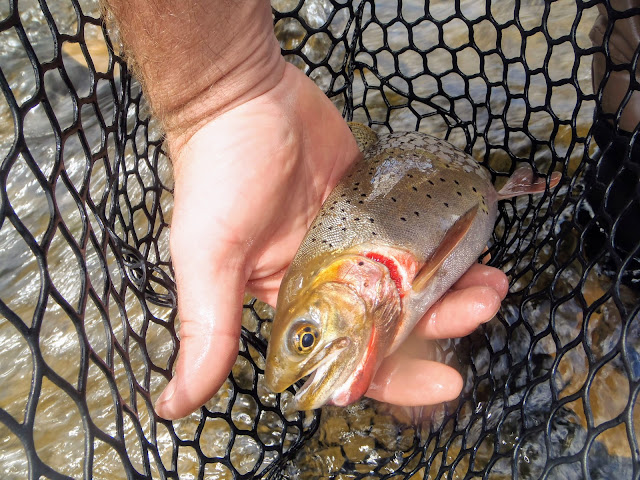 This is one of our favorite spots, and a pretty well-kept secret so I was shocked to find someone's fly stuck in a streamside bush. Upon retrieval and further inspection, I'm pretty sure it's mine from last year... I was fishing a couple of weighted nymphs under an indicator, so I was surprised when a big fish came up and slammed the indicator! Out of habit I set the hook and somehow the fish stayed on the line long enough for me to get it into the net. I was really shocked that I had just caught a fish on a hook-less indicator until we realized that my "hookset" had flossed the fish and my top nymph was stuck in the corner of his mouth. I decided to change out my rig for a dry/dropper, but I never did have another fish come up and take anything off the surface...kinda weird. 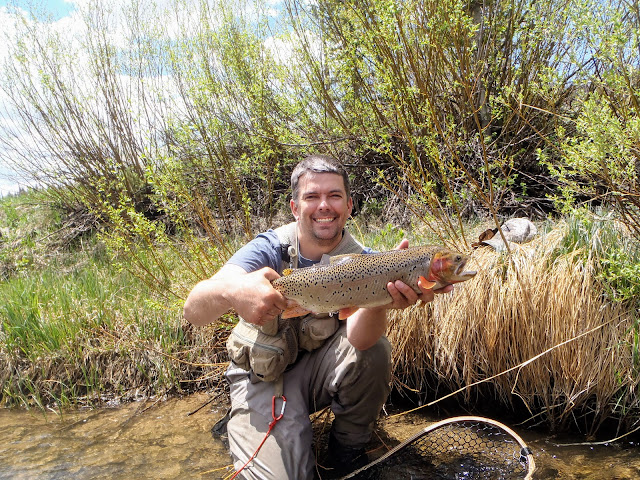 We spotted a couple fish holding tight to the bank, just behind a boulder in a pocket that was covered with willows above. The fish were obviously very protected in their little hideyhole, but still feeding and moving into the current from time to time. Not easy, but definitely worth a try. It was Lane's turn, so I climbed the bank to keep an eye on the fish while he casted. Try as he might, it just didn't seem like his flies ever got in front of the fish. When they were in the current, his flies weren't. When he managed to tuck a cast behind the rock, they didn't get deep enough before being swept out into the current. Standing above, I thought I could see a way to cast upstream of the willows and drift the flies to where the fish were nosing out into the current. When Lane had finally given up on these fish, I asked if I could give it a shot. Realistically, I figured my first cast would get stuck in the willows and we'd have to blow the hole to retrieve them. Surprisingly, my first cast landed right where I had hoped and the flies drifted perfectly to the fish. The largest of them ate right when I figured my flies were in the zone so I set the hook and was tied into my biggest fish of the day. It was a short fight that would've been completely anticlimatic if the fish would've actually fit in my net. As it was, getting the fish into the net and keeping it there was quite the challenge, and we actually decided to switch over to Lane's deeper net for a quick measurement and some pictures. 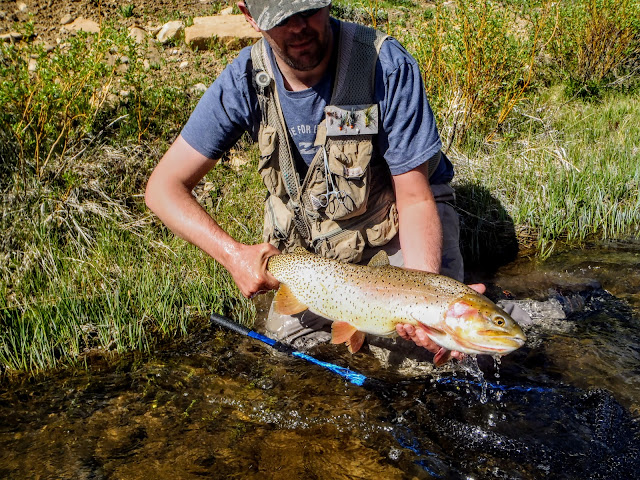 When I take pictures of fish the goal is always to keep them in the water as much as possible. That's why I rarely fish without a net. I get everything ready, figure out the best angle, make sure the camera is on and set up, lift the fish and quickly get a picture. I try and get a couple with the fish in the water, or just above it, and maybe a trophy shot. All of this takes just seconds and I make sure the fish is ready to go before I release it. There's nothing wrong with keeping fish, especially if you're going to eat them right away (I will never understand filling a freezer full of fish, just keep what you'll use and then you have an excuse to go get more!) but if you're planning on releasing a fish I believe it's your responsibility to do everything you can to ensure that fish lives. I'm always learning, and don't claim to be an expert, but just do the best I can until I know better then I'll do better. 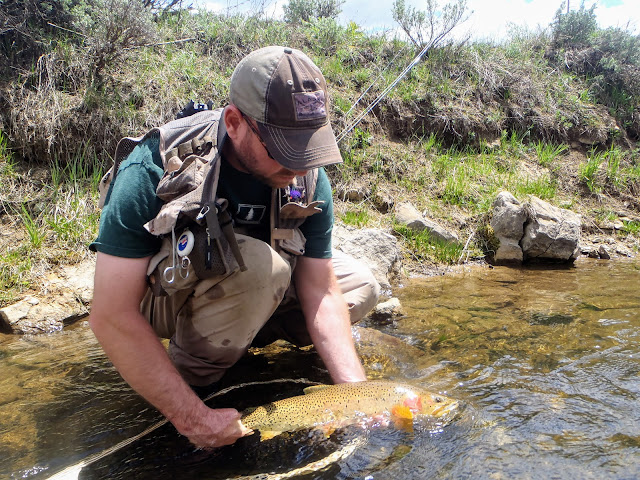 A great day with some great company and some amazing fish made for the perfect start to a Summer that I hope will be filled with good times.